There is a lot to be said for traveling light.  The main reason I am a fan of carrying less gear is because I am lazy.  There are, however, other benefits to traveling light.  For instance, carrying less weight means you can travel faster, farther and arrive more rested.  Given the same amount of calorie intake, I will be able to walk a lot further carrying 10 pounds than someone carrying 80 pounds.  If I can carry a pack under 10 pounds and do just as well, why would I carry an 80 pound pack?

Notice that I said ‘do just as well.’  Whenever I am loading a pack I find myself making compromises on gear.  I would love to have one of the two burner Coleman stoves with 30 gallons of fuel, but it would be a real chore to carry that.  Instead I look for other things to carry that will do almost as well but weigh a lot less.

I do not go to the extremes of cutting my toothbrush in half and other things that the ultralight enthusiasts do.  What I do to lose weight is to carry gear that has more than one use.  Another thing I do is to have gear that I know how to repair and carry the tools needed to repair it.  That way instead of carrying 2 extra shirts, 2 extra pairs of pants and all of the other extras of things that can wear out or tear, I carry a small repair kit.

On a recent trip to Canada to study with Mors Kochanski at Karamat Wilderness Ways, I forgot my sewing kit.  Almost every time I go into the wilderness for more than a couple days I find myself using the sewing kit for one reason or another.  This time, the seat of my Swedish Army Surplus wool pants ripped out.  Thankfully one of the other students, Grizzly Dave, was smart enough to bring a sewing kit and he was kind enough to let me use it.

We got to talking about The Mad Trapper, or Albert Johnson.  He was a wilderness man who escaped into the woods and evaded the Canadian Royal Mounted Police and other units for an extended period of time using minimal gear.  There is a book by Dick North called ‘The Mad Trapper of Rat River.’  One of the more interesting things in the book is a catalogue of the gear found on Albert Johnson at his capture.  He carried very little gear.

One of the ways he was able to go with so little gear is because he brought along the materials and tools to repair everything he used.  He carried a sewing kit and numerous other materials to repair things like his snow shoes.

Every person, man or woman, who spends any serious time in the woods should be very capable clothing and gear.  There is nothing manly about being helpless.  You should know how to repair tears in your clothing and how to sew buttons back on.

I’m planning an extended expedition through jungle and mountains in the next few weeks.  One of the things I am doing is putting together two very good repair kits to carry along.  Here is a video I shot of Grizzly Dave’s sewing kit.  I’ll put together another video of my sewing kits when I get them finished.

Here is a link to learn more about Albert Johnson

Here is a link to ‘The Mad Trapper of Rat River‘ 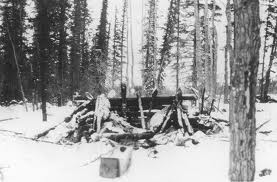