By Christian Noble on March 23, 2018 in Master Woodsman

A small group of organizers has slowly but surely been putting together a Global Bushcraft Symposium (GBS) scheduled for June 2019 in the foothills of the Canadian Rockies. While the website (linked at bottom) offers specific information on the location, initial itinerary, more than a dozen themed camps, as well as a frequently updated list of speakers; as one of the organizers, I thought I would offer my perspective on the event.

First off, please know that it is our intent to avoid a leader / participant dynamic. Yes we will most certainly have highly respected thought leaders starting the conversation in the multitude of GBS venues, however, their primary purpose is to get everyone involved and sharing.

And if you will indulge me, I’d like to begin that conversation now by offering several reasons as to ‘why’ have GBS, starting with an excerpt found in the 1912 edition of The Book of Woodcraft and Indian Lore, by Ernest Thompson Seton.

“For a man who is lost, the three greatest dangers in order of importance, are Fear, Cold, and Hunger. He may endure extreme hunger for a week, and extreme cold for a day, but extreme fear may undo him in an hour. There is no way of guarding against this greatest danger except by assuring him that he is fortified against the other two.”

The first ‘why’ I will mention is to emphasize the importance of teaching accurate skills in their proper context. Looking at Seton’s above quote regarding being lost in a cold climate; he dissects the differences in hunger, cold, & mindset and their relationship to one another. It demonstrates how ‘bushcrafters’ have had a long-term understanding of a survivor’s physiology, the physics of the environment (and related skills), and how all that has a direct relationship on one’s psychology — Seton knew survival knowledge in its proper context displaces fear; he also recognized fear as the greatest danger before the word ‘survival’ even existed.

One of our goals at GBS is to expand on the contextual nature of physiology, physics, and the psychology of survival with modern data and sharing best teaching practices. With abundant sources of information available today, and many, if not most, sharing only “sound bites” and lacking context, we all saw the need to address.

Another very important ‘why‘ GBS is to recognize and pay homage to those from our past; as an example, it was people like Seton, George “Nessmuk” Sears, Daniel Carter Beard, Ellsworth Yeager, Warren Miller and others whose generation connected us to a time when the “last frontier” was ending. Much of the knowledge captured in the text and drawings of their books came from the people of the First Nations, and thankfully, many authors recognized that fact. And I can think of no better example of this to share with bushcrafters than that of the bow drill — as it was Seton himself who introduced it to the world…

Paying a little homage here now with a personal story. Several years ago I was in Steve Watts cabin before one of his classes when he said to me privately in a whisper, “I found it.”

“What did you find Steve?” me whispering back in curiosity.

“Where the bow drill came from, the connection.” Steve finally replied to me smiling ear to ear under his big hat. He wouldn’t tell me anymore that day, the rest of that conversation, and a write-up, was reserved for his best friend David Wescott (one of our GBS organizers by the way).

Through Watts and Wescott’s research, we discovered that Seton was taught the bow drill from Walter Hough of the National Museum, who, per a June 1904 article in Country Living Magazine “…learned from the Indians.” Seton went on to use the bow drill extensively in his teachings, especially as a metaphor. 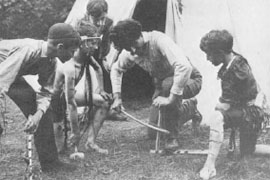 That being said, within bushcraft, knowledge is very often taken for granted as to its origin and context; and there is no amount of emphasis that can truly express how thankful we should be to those that came before us and shared that knowledge for the greater good — this will be recognized and discussed with the best of intentions at GBS. Which now brings me to my last point as to ‘why’ (and another bow drill story). 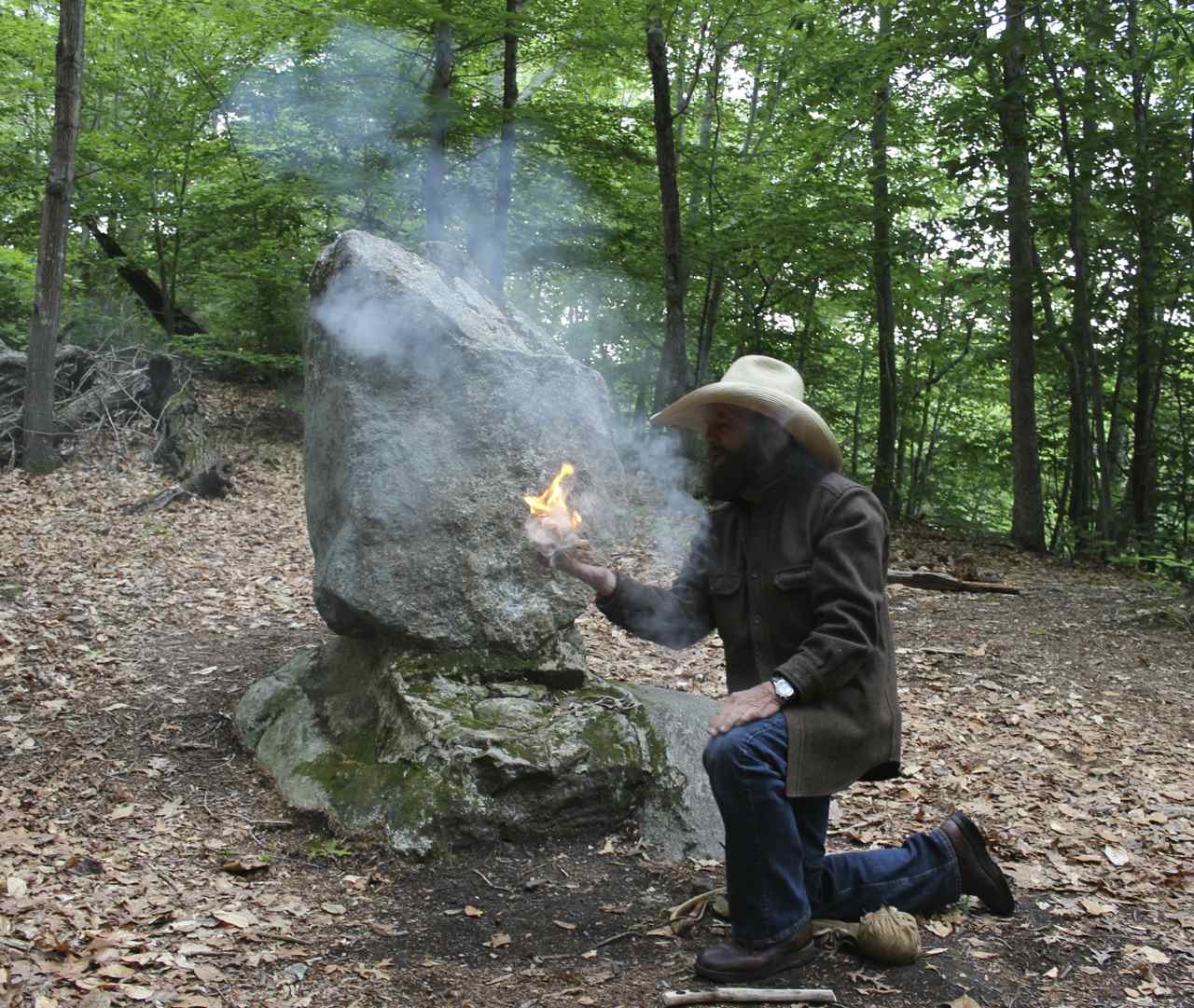 Steve Watts paying homage to Seton by blowing a bow drill coal to flame in front of Medicine Rock.

Bernard S. Mason was a disciple of Seton, who in the 1939 edition of his excellent book simply titled, Woodcraft, tells this story:

“Why? – in a world of matches? Ernest Thompson Seton answered well when a group of “practical” business-men questioned his zest for the rubbing-stick fire — he said, pointing to the ground, “You are thinking of the fire that is lighted down there,” and pointing to his breast, continued, “I am thinking of the flame that is kindled in here!”

Bernard Mason, like Horace Kephart, Townsend Whelen, Richard Graves, and many, many others picked up the torch of knowledge from Seton’s generation, of which they carried that fire from the (first) people and the generations before them and so on…

And as YOU are reading this, you are no doubt carrying that same fire too — and it is for this reason most of all as to ‘why’ the Global Bushcraft Symposium!

GBS is for those that teach and share bushcraft/survival knowledge. In attendance will be those who have passed the torch of knowledge to more bushcrafters than anyone else in our time. Come listen to how they have done it, share how you do it, and leave inspired to kindle more flames in others. Keep the fire lit.

Firebug – A Survival Music Video :-)
Why the GBS with Kochanski and Wescott