Your Campfire And The Weather

By Christian Noble on February 25, 2013 in Firecraft, Master Woodsman

Treat fire with the respect it deserves and it will keep you warm, cook your food, make your water safe, and a host of other things to make you a happy woodsman.

Be disrespectful and it could leave you cold and lonely OR you could have a wildfire on your hands!

Wouldn’t it be nice to know your Fire’s “mood” beforehand?

Three things primarily dictate fire behavior: weather, fuel and topography. In this article, we will cover weather. Having to articulate this in writing without making it a book may come across a little technical. The experienced woodsman should see the correlation between weather and fire behavior right away. For the Apprentice Camper, I tried to put some of this together at the end, so hang in there… nobody has graduated from the School of the Woods yet… 😉

WEATHER is dynamic, changing even by the minute in many cases. It is also the most important in making up a fire’s environment. There are several elements of weather that must be considered to understand (predict) fire’s behavior: Temperature, Wind, Atmospheric Stability, Relative Humidity, Precipitation/Drought, and Cloud Development.

Air temperature has a direct influence on fire behavior because of the heat requirements for ignition and the continuing combustion process. The sun emits short-wave radiation to the earth, fuels, and surrounding vegetation. Those surfaces absorb a portion of that heat and reflect the difference as long-wave radiation. That long-wave radiation is absorbed by the water-vapor in the air, thus raising its temperature as well. As a result, less heat is required for ignition.

While many will say that relative humidity is the most important aspect of weather as it relates to fire behavior, you will learn that temperature drives relative humidity and more. Although I mention temperature here briefly, I do so first so you will note how it is interwoven into the other aspects of fire weather.

The wind influences fire behavior by accelerating evaporation and carrying that water vapor away, carrying heat to unburned fuel (preheating), and supplying oxygen for the combustion process. It can also encourage and provide transport of firebrands (wildfire).

Be aware there are different types of winds. Air always moves as a result of temperature differences; it moves from high pressure to low pressure trying to balance that temperature creating gradient winds. “Highs” spiral outward in a clockwise direction. Low pressure will spiral counter clockwise toward the center. Frontal winds are at the boundary of two air masses of different temperatures that start from an area of low pressure and will always be the strongest.

Local wind types include land and sea breezes, eddies from large objects including tree lines, and slope winds. These will vary greatly as the temperature changes throughout the day…

Atmospheric stability is the resistance of the atmosphere to vertical motion. If an atmosphere is unstable, vertical movement of air is encouraged. Vertical motion is caused by heating a parcel of air which then rises because it is less dense than the surrounding cooler air. The hotter the ambient temperature near the earth’s surface (in relation to the air above it), the more unstable the parcel of air. Because of the unrestricted updraft of the atmosphere and convective movements, fire will burn more intensely in an unstable environment, it will also be more difficult to contain.

Indicators of an UNSTABLE atmosphere are:

Air masses with different temperatures are continually mixing trying to reach the same temperature. The greater the difference in temperatures in the atmosphere, the more unstable the conditions and movement; both vertically and horizontally – as the sun does not uniformly heat the earth’s surface. The observant Woodsman should take note of their fire’s location and adjacent areas because of this, as…

Differences at ground level can occur. In an open area, where air maybe heated from a warm ground, that air is made lighter, thus expanding and rising.  Where a forested area will not heat up the air thus being cooler. Cooler air from an area not heated as much (and heavier), will flow in replacing the warmer air – thus, wind.

In a very stable atmosphere, an inversion, will occur. That is where the temperature actually increases with altitude instead of decreasing. Expect calm winds, high humidity, low temperature and smoke/clouds/fog will only rise to the inversion, then flatten out and spread horizontally. 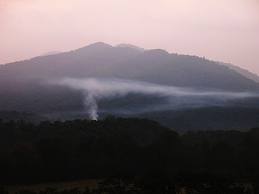 Relative Humidity (RH) is a measure of water vapor the air contains expressed as a percentage of the amount it contains at saturation. When the RH is 50 percent, it means that the atmosphere contains half of the moisture that it could contain at that same temperature.

Since RH is near 100% whenever frost or dew occurs at daybreak, this rule of thumb can be used to estimate the minimum RH for the day (usually afternoon, more coming on that). Simply use the current temperature and predicted high from the forecast and the above-mentioned relationship. Note that when either moist or dry air is being brought into an area by winds, this rule does not hold.

Precipitation, or lack thereof, has a direct effect on fuel moisture and relative humidity. Temperature usually drops and winds typically calm when precipitation occurs. Weather patterns (precipitation) in the winter are easier to predict as they are associated with frontal systems whereas in summer, there can be localized cloud development (precipitation) from convective activity. This is important to note as later we will discuss fire weather forecasts and how there can be differences in fire behavior within short geographical distances.

Clouds are formed when there is a lot of surface heating and moisture content. As the air near the surface heats, it rises and is replaced by cooler air. If the atmosphere is not very dry to begin with and the air reaches saturation point, the moisture combines into droplets forming visible clouds. If they continue to build, they become darker and rain may occur.

Clouds are also caused by fronts. These are important to note, as they are visible indicators of changing weather. As a reminder, Cumulus clouds indicate vertical movement = unstable atmosphere. On the other hand, clouds are also moisture and shade the surface of the earth marginalizing heat from the sun.

Thunderheads are Cumulonimbus clouds that build high and become quite turbulent with high convective activity causing updrafts and downdrafts. With a thunderhead some distance off, I have repeatedly watched storms ‘suck-in’ the surrounding atmosphere and then with its approach, have the wind shift in the opposite direction with a strong downdraft. This is important to note, as these cells may not cover a large area in summer; one passing by may push out firebrands and offer no precipitation in your location. Also, wildfires are regularly started by lightning from thunderheads.

PUTTING THIS ALL TOGETHER AND THE DIURNAL CYCLE

So what does all this mean? Knowing weather conditions from the recent past, present and future will give you an idea of how easy or hard it will be to ignite, manage, and contain (prevent wildfire) your campfire.

In sum, temperature drives much when it comes to weather. Some we can see and/or feel in the form of ambient temperature, radiant heat, wind, fronts, clouds, and moisture content in the air and fuels. We also shared some visible indicators of atmospheric stability in this article…

In a stable environment, with high RH and steady to low winds, fire is more difficult to start, get combustion going and intensity is less. It is also easier to contain. The evening through morning are normally the times when things are MOST stable. It is also a time when temperature is at its lowest. Remember, this is all relative; you could have high fire danger at anytime. Also, fronts, clouds, and precipitation are variables.

Early afternoon is generally the peak time for a fire’s activity. Radiation from the sun is at its maximum when the sun is directly overhead. As we discussed, the sun’s short-wave radiation is reflected as long-wave radiation from objects on the earth. There is a short-delay (depending on latitude) in the long-wave reflection of a couple hours after high-noon. At this time, temperature is the highest, RH is at its lowest, wind is at its maximum, wind direction is most variable, atmosphere is most unstable (remember indicators) and fuels will be the driest.

And fuels do play a huge part in all of this too, which we will discuss in another article. But very briefly, one way fuels are categorized is by the time it takes for them to respond to changes in moisture… which is driven by the weather. Those fuels less than ¼” in diameter including leaves, grasses, etc. are considered one-hour fuels. Weather impacts these smaller fuels very quickly. 10-hour fuels are ¼” to 1” in diameter, 100-hour 1” to 3”, and 1,000-hour fuels 3” to 8” in diameter.

We can’t control the elements; we must work with them. Fire is both an Art & Science. The information shared thus far is just a sprinkling of the science. It is also greatly summarized. The art comes from experiencing fire behavior under different weather conditions, time of day, season, fuel types, and geographic locations. There are factors that are going to be specific to YOUR location. And it is worth noting, weather/fire behavior in the field will be different from an urban backyard.  It is up to you to make these observations and take notes (at least mental).

To help accelerate one’s learning curve and for safety’s sake, I strongly encourage everyone to look at your local fire weather forecast each time you plan a fire. Search “your state Fire Weather Forecast” or “your state Fire Danger” online. It may take some clicking, but you will eventually find a map with a ranking system of Low Fire Danger to Extreme as well as a host of other weather info that will help “connect the dots.” This map can be invaluable for the traveler in particular. As an example, you may have high fuel moisture at your home; down the road it could be bone dry. Knowing ahead can be helpful, especially if you are debating whether to use a sleeping bag or fire for warmth.  I use these forecasts all the time for that very reason. 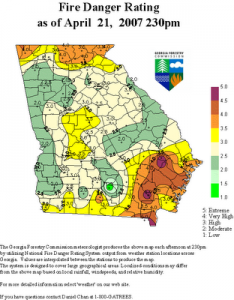 The information in this article came from my field experience as a Professional Forester and course material I received as Certified Burn Manager in Florida and Georgia, respectively. I checked it against other state’s information I could find online and it is very consistent. Should you want to do further research, one of the better-organized sources of information online is the Forest Encyclopedia Network.

Also of note, here are the recognized Fire Climate Regions.