By Christian Noble on August 2, 2013 in Firecraft, Master Woodsman

My friend Dusty Rumley and I went on a hike the other day along the Etowah River near Canton, Georgia.  The purpose… none, which was great.  Very relaxing.  Ahhhh….

These were Dusty’s woods and he knew them well.  One of several things he pointed out to me was this pestle (picture below) in a boulder by a small waterfall.  Who knows how old?  And the good man that he is, Dusty rescued a flipped-over turtle sinking on his back in a mucky sandbar, his flippers having made angel wings for who knows how long at the edge of the river.  Now that I think about it, that turtle had double his luck that day.  Not only was he rescued, we weren’t hungry at the time either…  😉 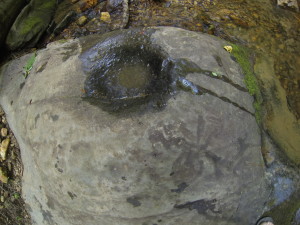 Pestle in boulder along a tributary of the Etowah River in North Georgia. Perhaps ancient?

As we walked, time was spent talking about surrounding plant life, knives, and primitive skills.  Talking friction fire, one of things he mentioned to me was an online report in the National Museum about Fire-making apparatus.  He sent me the link I am now sharing with you HERE.

Not going to give a review of the report in this article, suggesting you look through the report using the navigation tools in the bottom right corner as it is simply very interesting.  However, as I like to apply primitive technology today, I will share two excerpts of particular interest: 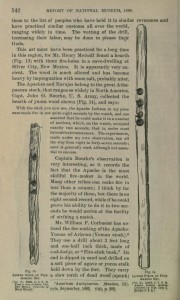 From the 1888 report on Fire-Making Apparatus.

“With the stick you now see, the Apache Indians in my presence made fire in not quite eight seconds by the watch, and one asserted that he could make it in a number of motions, which, on the watch, occupied exactly two seconds, that is, under most favorable circumstances.  The experiments, made under my own observation, ran all the way from eight to forty-seven seconds; sand is generally used, although not essential to success.”
Captain Bourke’s observation is very interesting, as it records the fact that the Apache is the most skillful fire-maker in the world.  Many other tribes can make fire in less than a minute; I think by far the majority of them, but there is no eight second record, while if he could prove his ability to do it in two seconds he would arrive at the facility of striking a match.

First-off, when they say fire, they mean a coal being created by friction through the hand drill, pump drill, or bow drill.  And keep in mind, the weather (in that geography) and materials have a lot to do with success.

Page 545’s description of an eastern tribe’s attention to moisture:

After the hut is built a fire is made, the squaws usually begging fire or matches from the settlers, but, in case their fire is out and they have no other means of kindling it, they resort to the primitive method of producing it by friction of wood.  They always carry their fire-sticks with them, keeping them carefully wrapped in several layers of skins tied up with thongs and made into a neat package; they are thus kept very dry, and as soon as the occasion for their use is over, they are immediately wrapped up again and laid away.

Again, I suggest you look through the report yourself.  It is very interesting with references to numerous tribes throughout North America and even Central and South America.  And most tribes used the hand drill, but mentions of the bow drill (Canada) and pump drill (Iroquois) and at the time the report was written, a transition away from friction fire by the Seminoles and others to flint & steel and matches…

For your entertainment, 11+/- second hand drill by yours truly…  Will try and get a quicker one on video soon.

3 Responses to Fire-making apparatus – Report from 1888