“In God we trust, everyone else bring data”

As humans in our current society, our lives are very much data driven, everything backed up by science. There was a time however, when man had to rely purely on observation and what today we call folklore. Well that folklore is based on something, and it can be downright accurate. In this article on Weather Wisdom, we will look at predicting the weather by observation and try to explain some of the folklore.

Unlike our recent ancestors, it is worth recognizing that the majority of us today live in climate controlled homes, drive in climate controlled vehicles and have occupations that simply aren’t influenced by the weather. For most, a 5-day (or less) local weather forecast is all that is needed for the occasional outing. Weather is usually a secondary variable in our planning.

It was so much more important just a few generations ago. Whether you were in the city on a trolley car, or out on the farm, you had to know how to dress and what to expect. Today, many of us simply do not know how to dress properly for the longterm AND cannot predict the weather.

So how do we fix that? The hard way would be through pure observation. Take notes of the weather every day, season after season, until you figure out the patterns.

A quicker way is to use the wisdom of our elders, sprinkle in some science to understand the wisdom, and then, observe. 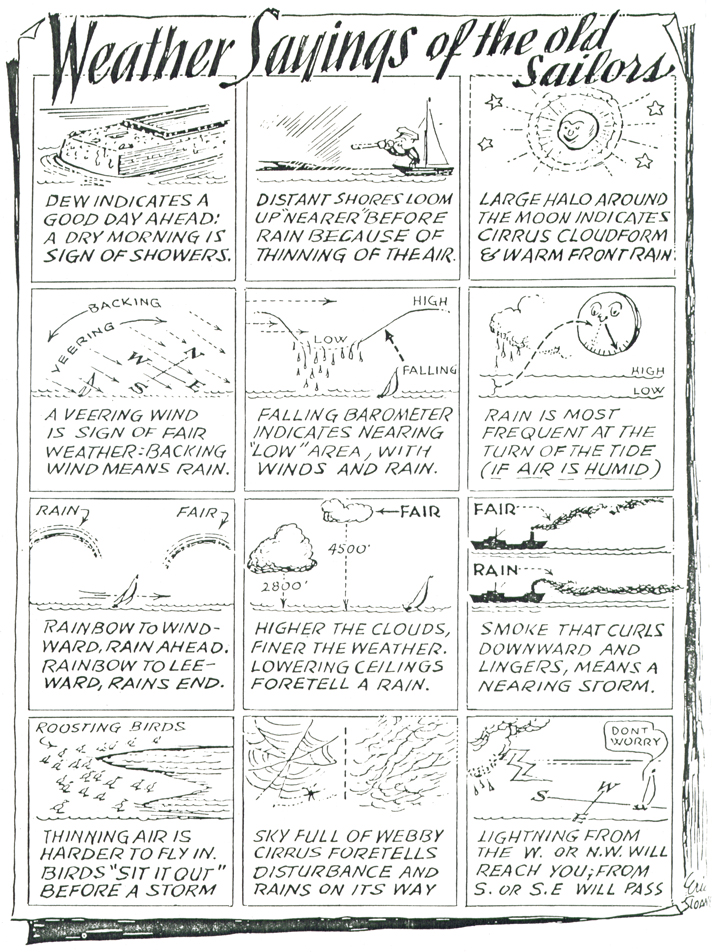 The above drawing is the first thing you see in Eric Sloane’s Weather Book of which we highly recommend. We will tackle some of these sayings and more in this article.

First, let’s look to the sky…

“Rainbow in the morning, need for a warning”

Major storm fronts typically travel from west to east. If you see a red sky during sunset, it is the result of a high pressure system with dry air stirring up dust particles in the west. Knowing the weather will be coming from the west, you can expect no rain. A red sky in the morning means the dry air has already passed you to the east and you should expect a low coming in from the west with moisture.

Rainbows indicate similarly for direction; if one is to your east, the wet weather has moved past you. One to your west means rain is likely on its way. “If there is a halo round the sun or moon,
then we can expect rain quite soon.”

Cirrus clouds can be the first to appear ahead of a front. The halo around the illuminated sun or moon is caused by light refracting through the ice crystals of high cirrus clouds.

High cirrus clouds (approaching front) look like mare’s tails that have been shaped by the upper winds. Shifting wind directions are typical of an approaching low pressure and make cirrocumulus clouds look like mackerel scales. This is usually a good indicator of changing weather.

“If in the sky you see cliffs and towers,
it won’t be long before there is a shower.”

The Weather Wisdom above is from The Book of Woodcraft by Ernest Thompson Seton. I like this one a lot, then again, I am a Seton fan. Winds from the east can mean an approaching storm, the west the opposite. North winds mean cold, so watch the old folks who are more suspectible. A southerly wind typically means low pressure and the fish will be biting (more on the animals coming). And we know what a low can bring.

“Dew on the grass,
no rain will come to pass”

With clear skies at the night, the atmosphere is more conducive for surfaces (including grass) to radiate off their heat. Those surfaces being cooler will have dew (condensation) form on them. IF the clear skies continue, then obviously no rain. If there is no dew, warmer temps likely prevailed due to cloud cover, etc., so the expectation is rain. While there are no guarantees in any of the folklore we have mentioned so far, just like the weatherman today uses the words “chance” and “probable,” the odds of the dew folklore staying true are less than the fore mentioned sayings.

drawing from Ernest Thompson Seton’s, Wild Animals I Have Known

“The rain-crow is supposed by all hunters to foretell rain,
when its “Kow, kow, kow” is long and hard.
So, also, the tree-frog cries before rain.
Swallows flying low is a sign of rain; high, of clearing weather.”
The Book of Woodcraft
– Ernest Thompson Seton

Watch the animals… There are several sayings as it relates to animals, some have a degree of validity, some don’t. I don’t pay attention to the cat ones as most are indoor now (food for thought). Nonetheless, it is believed that a lowering air pressure (pending storm), the more active the wildlife, although they get quiet immediately before a storm. As a lifelong fisherman and hunter, there is no doubt in my mind about the increased wildlife activity associated with a low. For birds, it is believed the falling pressure causes discomfort, so they fly low, where in fair weather, high, as outlined by Seton above. Whether the discomfort is true or not, I can’t say. Perhaps the birds fly lower for the insects which are more active during low pressure or a combination there of…

“If a fly lands on your nose, swat it till it goes.
If the fly then lands again, it will bring back heavy rain.”

And speaking of insects, they are very sensitive to changes in temperature. 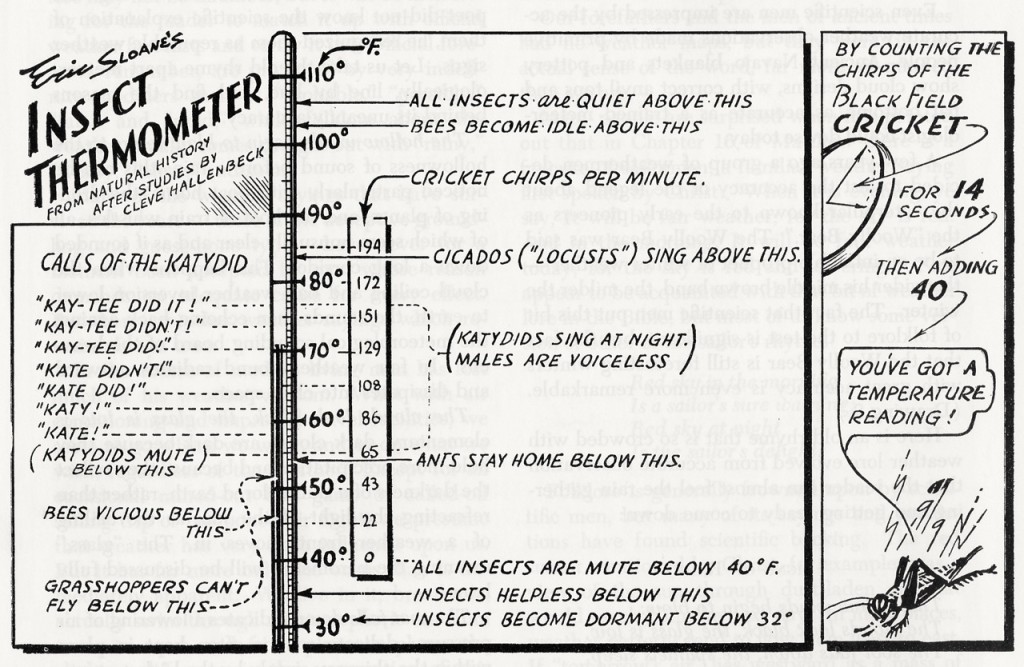 Temperature and Humidity are two things we haven’t talked about yet, and they are very much related. Although not as sensitive to them as wildlife, we humans can still feel and sense both quite well. An upcoming rain is usually indicated by frizzy hair, the air smells like compost, swamps are more pungent because of the lower pressure, certain tree leaves may curl, and scents in general are stronger. That’s the humidity. Well humidity is actually driven by Temperature as is weather in general. Mother Nature is always trying to balance. The second law of thermodynamics tells us heat is attracted to cold. Whether that is the heat leaving your body for the cold ground or a large weather mass moving through the earth’s atmosphere, temperature differences are always trying to balance. We discuss this in some detail in another weather related article, Your Campfire And The Weather. As you will read in that article, your fire’s behavior and smoke plume are a good indicator too. Smoke rising steadily is a sign of clear weather. Smoke that swirls or even descends means low pressure and potential moisture.

SOURCES FOR THIS ARTICLE:

Enjoy these images on Weather Wisdom out of  Seton’s 1912 The Book of Woodcraft... 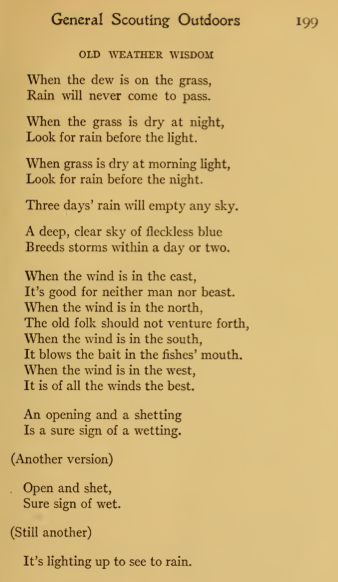 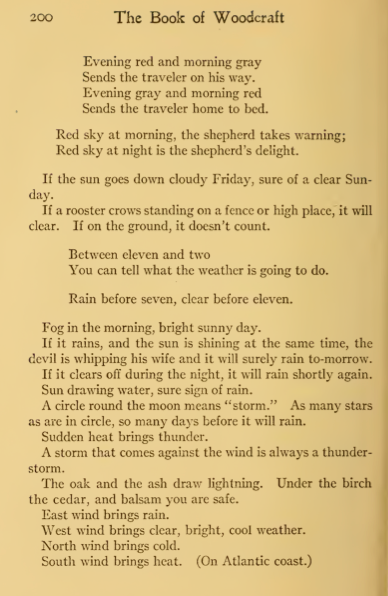