The Bear is Coming Back

By Christian Noble on February 19, 2013 in Master Woodsman

For those of us in the southern states, particularly where there are a lot of trees and topography, we lose sight of the Big Dipper in winter and Cassiopeia becomes more prevalent.  Vice versa in the summer.

I know it is still very much winter up north, nonetheless, it’s nice seeing the days getting longer and Ursa Major coming back.

It is also a good time of the year to teach the younger ones how to find the North Star (Polaris) with both Cassiopeia and the Big Dipper.

I like that there are so many cultures that have myths around this part of the sky too.  You can find many online if you do a search.

Here is my favorite from the Cherokee…

There were four hunters who were brothers.  No hunters were as good as they at following a trail.  They never gave up once they began tracking their quarry.  One day, in the moon when the cold nights return, an urgent message came to the village of the four hunters.  A great bear, one so large and powerful that many thought it must be some kind of monster, had appeared.  The people of the village whose hunting grounds the monster had invaded were afraid.  The children no longer went out to play in the woods.  The long houses of the village were guarded each night by men with weapons, who stood by the entrances.

Each morning, when the people went outside, they found the huge tracks of the bear in the midst of their village.  They knew that soon it would become even bolder.

Picking up their spears and calling to their small dog, the four hunters set forth for that village, which was not far away.  As they came closer they noticed how quiet the woods were.  There were no signs of rabbits or deer and even the birds were silent.  On a great pine tree they found the scars where the great bear had reared up on hind legs and made deep scratches to mark its territory.  The tallest of the brothers tried to touch the highest of the scratch marks with the tip of his spear.  “It is as the people feared,” the first brother said.  “This one we are to hunt is Nyah-gwaheh, a monster bear.”

“But what about the magic that the Nyah-gwaheh has?” said the second brother.

The first brother shook his head.  “That magic will do it no good if we find its track.”

“That’s so,” said the third brother.  “I have always heard that from the old people. Those creatures can only chase a hunter who has not yet found its trail.  When you find the track of the Nyah-gwaheh and begin to chase it, then it must run from you.”

“Brothers,” said the fourth hunter who was the fattest and laziest, “did we bring along enough food to eat?  It may take a long time to catch this big bear.  I’m feeling hungry.”

Before long, the four hunters and their small dog reached the village.  It was a sad sight to see.  There was no fire burning in the centre of the village and the doors of all the long houses were closed.  Grim men stood on guard with clubs and spears and there was no game hung from the racks or skins stretched for tanning.  The people looked hungry.

The elder sachem of the village came out and the tallest of the four hunters spoke to him.

“Uncle,” the hunter said, “we have come to help you get rid of the monster.”

Then the fattest and laziest of the four brothers spoke.  “Uncle,” he said, “is there some food we can eat?  Can we find a place to rest before we start chasing this big bear. I’m tired.”

The first hunter shook his head and smiled.  “My brother is only joking, Uncle.” he said.”  We are going now to pick up the monster bear’s trail.”

“I am not sure you can do that, Nephews,” the elder sachem said.  “Though we find tracks closer and closer to the doors of our lodges each morning, whenever we try to follow those tracks they disappear.”

The second hunter knelt down and patted the head of their small dog.  “Uncle,” he said, that is because they do not have a dog such as ours.”  He pointed to the two black circles above the eyes of the small dog.  “Four-Eyes can see any tracks, even those many days old.”

“May Creator’s protection be with you,” said the elder sachem.

“Do not worry. Uncle,” said the third hunter, “Once we are on a trail we never stop following until we’ve finished our hunt,” the fourth hunter said.  “That’s why I think we should have something to eat first.”  But his brothers did not listen.  They nodded to the elder sachem and began to leave.  Sighing, the fattest and laziest of the brothers lifted up his long spear and trudged after them.

They walked, following their little dog.  It kept lifting up its head, as if to look around with its four eyes. The trail was not easy to find.

“Brothers,” the fattest and laziest hunter complained, “don’t you think we should rest. We’ve been walking a long time.”  But his brothers paid no attention to him. Though they could see no tracks, they could feel the presence of the Nyah-gwaheh.  They knew that if they did not soon find its trail, it would make its way behind them.  Then they would be the hunted ones.

The fattest and laziest brother took out his pemmican pouch.  At least he could eat while they walked along.  He opened the pouch and shook out the food he had prepared so carefully by pounding together strips of meat and berries with maple sugar and then drying them in the sun.  But instead of pemmican, pale squirming things fell out into his hands.  The magic of the Nyah-gwaheh had changed the food into worms.

“Brothers,” the fattest and laziest of the hunters shouted, “Let’s hurry up and catch that big bear!  Look what it did to my pemmican.  Now I’m getting angry!”

Meanwhile, like a pale giant shadow, the Nyah-gwaheh was moving through the trees close to the hunters.  Its mouth was open as it watched them and its huge teeth shone, its eyes flashed red.  Soon it would be behind them and on their trail.

Just then, though, the little dog lifted its head and yelped.  “Eh-heh!” the first brother called.

“Four-Eyes has found the trail,” shouted the second brother.

“We have the track of the Nyah-gwaheh,” said the third brother.

“Big Bear,” the fattest and laziest one yelled, “we are after you, now!”

Fear filled the heart of the great bear for the first time and it began to run.  As it broke from the cover of the pines, the four hunters saw it, a gigantic white shape, so pale as to appear almost naked.  With loud hunting cries, they began to run after it.  The great bear’s strides were long and it ran more swiftly than a deer.  The four hunters and their little dog were swift also though and they did not fall behind.  The trail led through the swamps and the thickets.  It was easy to read, for the bear pushed everything aside as it ran, even knocking down big trees.  On and on they ran, over hills and through valleys.  They came to the slope of a mountain and followed the trail higher and higher, every now and then catching a glimpse of their quarry over the next rise.  Now though the lazy hunter was getting tired of running.  He pretended to fall and twist his ankle.

“Brothers,” he called, “I have sprained my ankle. You must carry me.”

So his three brothers did as he asked, two of them carrying him by turns while the third hunter carried his spear.  They ran more slowly now because of their heavy load, but they were not falling any further behind.  The day had turned now into night, yet they could still see the white shape of the great bear ahead of them.  They were at the top of the mountain now and the ground beneath them was very dark as they ran across it.  The bear was tiring, but so were they.  It was not easy to carry their fat and lazy brother.  The little dog, Four-Eyes, was close behind the great bear, nipping at its tail as it ran.

“Brothers,” said the fattest and laziest one.  “Put me down now.  I think my leg has gotten better.”

By the time the other brothers caught up, the fattest and laziest hunter had already built a fire and was cutting up the big bear.

“Come on, brothers,” he said.  “Let’s eat. All this running has made me hungry!”

So they cooked the meat of the great bear and its fat sizzled as it dripped from their fire.  They ate until even the fattest and laziest one was satisfied and leaned back in contentment.  Just then, though, the first hunter looked down at his feet.

“Brothers,” he exclaimed, “look below us!”

The four hunters looked down.  Below them were thousands of small sparkling lights in the darkness which they realized, was all around them.

“We aren’t on a mountain top at all,” said the third brother.  “We are up in the sky.”  And it was so.  The great bear had indeed been magical.  Its feet had taken it high above the earth as it tried to escape the four hunters.  However, their determination not to give up the chase had carried them up that strange trail.

The hunters looked.  There, where they had piled the bones of their feast the Great Bear was coming back to life and rising to its feet.  As they watched, it began to run again, the small dog close on its heels.

“Follow me,” shouted the first brother.  Grabbing up their spears, the four hunters again began to chase the great bear across the skies.

So it was, the old people say, and so it still is.  Each autumn the hunters chase the great bear across the skies and kill it.  Then, as they cut it up for their meal, the blood falls down from the heavens and colors the leaves of the maple trees scarlet. They cook the bear and the fat dripping from their fire turns the grass white.

If you look carefully into the skies as the seasons change, you can read that story. The great bear is the square shape some call the bowl of the Big Dipper.  The hunters and their small dog (which you can just barely see) are close behind, forming the dipper’s handle.  When autumn comes and that constellation turns upside down, the old people say. “Ah, the lazy hunter has killed the bear.”  But as the moons pass and the sky moves once more towards spring, the bear slowly rises back on its feet and the chase begins again. 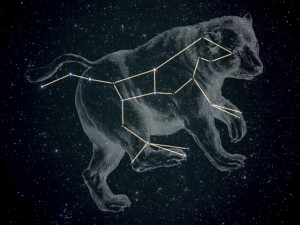 TWO WINTERS IN A TIPI
Rite of Passage