A Place to Rest My Cold, Cold Body

The earth giveth. And the earth taketh away – especially when it comes to body heat. The cold ground saps a mammal of its precious warmth. When you need to stay overnight in the wild unexpectedly, you need to know how to protect yourself from hypothermia. The materials necessary to accomplish this are abundant, waiting in the forest. So once again, the earth giveth.

Humans’ first teachers were the animals; after all, the wild creatures knew all the secrets of staying alive. All Paleo-man had to do was pay attention.

From Fox the early hunter learned the trick of placing his feet in a straight line, which eliminated the telltale swagger of lateral movement. From Heron the river stalker took the lesson of the long fishing spear. The barbed stinger of Wasp and the quill of porcupine inspired the flint-knapper to recurve the base of the stone point of his arrowhead. It’s no wonder so many animal tales comprise the mythology of ancient cultures.

One of the unsung heroes of woods lore – who seldom gets his due – is Gray Squirrel. Squirrel’s contribution was the lesson of shelter. No culture in history modeled its permanent home on Squirrel’s design, but for an emergency situation in cold weather this life-saving abode still holds an important place in the standard survival skills to know.

Many people look up at the clump of dead leaves that Squirrel crams into crotches of tree limbs and assume it is an enlarged version of a bowl-like bird’s nest. It’s not. It is an orb. Three materials are used in the making: leaves, sticks and frayed inner-bark. 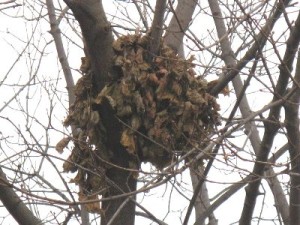 Leaves serve two purposes: their flat blades shed water if oriented properly and the spaces between the leaves act as insulation pockets to slow down the body’s heat loss. Sticks hold it all in place as an enveloping outer-structure. The frayed bark – usually from tulip tree or basswood in Southern Appalachia – adds more insulation and serves as a mattress.

Squirrel burrows an entrance from one side and pushes out a central sleeping chamber. If you duplicated this nest – modifying it only in size – you would become aware of a fundamental difference in sleeping postures between humans and most mammals. They like to curl up – a most efficient retainer of body heat and convenient if your blanket is a furry tail. If you tried sleeping like that, no doubt you would awake in the morning with your cold feet and head sticking out through the walls. (Brrr! About 75% of our body heat is lost through the head and neck.) As a species we don’t tolerate the fetal position for long periods. A linear modification is in order.

To begin construction on this emergency shelter – often called the “debris hut” – a sturdy dependable ridgepole is needed. Prop this log on a support and let one end angle to the ground. How high should that prop be? At what point should the prop meet the log? The angle of the ridgepole should roughly parallel an imaginary board laid down on your upper shoulder and hip as you are lying stretched out on one side. The pole should be 8” above the imaginary board. It does not matter how long the log is or where it is propped as long as you have several feet of space between your head and the prop.

A pre-existing prop is convenient – a stump, a rock, a fork in a tree – but not so important that you allow it to lure you to a less-than-ideal site. You want a sunny, dry, windless, material-rich site that is safe from accident. Let’s define these requirements.

Sunny – Choose open ground, if available, and the south-facing side of any mountainous terrain. Dry – Study the ground for potential water run-off or pooling. Don’t set up where water can invade from below. (The shelter will take care of precipitation.) Avoid low ground where humidity build-up is a nightly occurrence. Windless – Stay below ridge tops or gaps that draw regular winds. Material-rich – Whatever you plan to use as your primary insulation – dead leaves, green leaves, evergreen bows, grass, weeds – be sure your material-hauling distance is reasonable. Safe – Check for hanging limbs or potential deadfalls overhead. Avoid a site below a possible mudslide or avalanche of rock or snow. Survey the ground for animal burrows and major trails.The Prop Challenge – a family project.

Divide your family into two teams – one parent with each. Who can make a tripod prop strong enough to hold not only one end of a log three feet off the ground … but also the other team standing on it, jumping up and down? (The parent can play safety “spotter” during the product testing. He or she stands on the ground and holds the hands of the jumpers. Watch your toes, Mom and Dad.)

The log and tripod that survive this test serve as the ridgepole of the shelter. Now lean lots of straight sticks against the ridgepole on both sides. These A-frame sticks should be stacked tightly and angled enough to suggest a very steep roof, but the two sides should be wide enough at ground level to accommodate a body or two – depending on your plans. (A 2-person shelter is much warmer.)

Now use long thin sticks and sections of vines to create a latticework on the outsides. (This is why the 2” nubs were left on the A-frame sticks.) The latticework has no formula. Add them as horizontal or diagonal pieces and any angle in between.

To rainproof your shelter a covering will now be laid over the shelter’s infra-structure. For this write-up, we will use the material most readily found in the Blue Ridge – dead leaves.

Scrape up dead leaves where they are most abundant, but never take them from the land immediately uphill from your shelter. Haul these leaves to make a big pile within a few feet of your shelter. “Big” means big. You’ll want about 30 bathtubs-ful. How you place each armful on the shelter is crucial. Don’t cut corners on this part of the technique.

Dig one forearm (palm up) under the pile (elbow and forearm on the ground) and firmly pat down the leaves from above at least 10 times with your free forearm until you have a 6”-thick “patty” of dead leaves. Lift this patty carefully, take it to the outside of the A-frame and lay it down on the ground, half of it tilted against the base of the sticks. Lay it at an angle that would carry water away from the center of the shelter. All that patting you did orients a majority of the leaves into one common plane. This is a shingle.

After completing the first layer of shingles all the way around the base, start a second layer on top of the first – leaving only the large opening under the letter “A” wall-less. Because of the slant of the A-frame and the tilt of the shingles, this second layer will partially overlap the first, leaving several inches of the lower layer’s topside uncovered – like slanted steps. When the second layer is finished, begin a third. Continue until the walls are 2’ thick … everywhere (except the entrance, of course) … even the apex.

To keep the walls in place – Squirrel-style – add a second layer of A-frame sticks, the tighter the better. If you followed these instructions loyally, not one drop of rainwater will find its way into the interior of the shelter. But this shelter will not keep you warm … yet.

Note: There is a strong tendency for humans to consider a shelter roof complete at the point that it keeps out light. It isn’t. Be true to the two-foot-thick specification.

In very cold weather you’ll want to insulate yourself before you get into your shelter. Any material dry, fine, light, furry, feathery, downy, fibrous or rife with small air pockets might be a good candidate to cram into your clothing. Let comfort be your guide. A few good resources are: softened inner-bark; cattail, thistle or sycamore down; pummeled pine needles; dry, fruticose lichens or fungi; crumpled newspapers; rags, etc. Of that list, the premier clothes-stuffer is cattail down.

To install insulation in your shelter, stuff as many leaves as possible into the interior. Finally position one more pile near the entrance and on top of … your door.

Without a door, the leaves of that final pile (which you will pull in over your head) will simply disperse and expose your head (the most important part of your body to keep covered). The door will simply lean against this pile to hold it in place.

A perfect model for a door would be a triangular section of fencing – say, hog wire or chicken wire. Could you make something like that out of sticks, vines and inner-bark? Try it. You’ll want a section about 3’ by 3’.

First … walk away from your shelter and urinate. Then, hopefully, you won’t have to get out during the night. (Each time you leave and re-enter, the insulating leaves inside are more compressed and broken – no longer filling up the inside space. Such a diminished pile is less insulating. Ideally, you would want to refill the shelter with leaves each time you re-enter.

For that first entry, auger yourself into the leaves closer to the top than the bottom. You do want leaves above you but you want more between the cold ground and you. When you are almost completely inside, pull in that final pile of leaves after you by grabbing the door and leaning it toward you.

This shelter can keep you alive in weather that would otherwise kill you, but there are two warnings associated with all debris huts of this type:
1.)   This shelter is plausible only for consecutive night use. Never revisit an old shelter that has been abandoned for any length of time. They make homes for animals with whom you do not want to snuggle up.
2.)   Never build a fire near or inside this design. The debris hut is, in fact, very similar to a large well-made pyre.

This article is posted here with permission from our friend, Mark Warren.  It is the third of six in a series about Primitive Survival Skills.  Mark Warren is a naturalist, composer, novelist, and director of  Medicine Bow, a ”primitive school of earthlore” in the North Georgia Mountains. Classes range from Bow Making, Tracking, to Basic Survival and more.  However, where Medicine Bow shines is Mark’s intimate knowledge of Cherokee plant use backed up with science from his degree in chemistry / pre-med.  Many classes are plant focused.  Over 30 years experience as a full-time outdoor educator, former Slalom/Downriver combined U.S. National Canoe Champion and World Longbow Champion to boot.  He is also the author of Two Winters in a Tipi.  His book can be found at Books-A-Million, Barnes & Noble, Amazon, etc., however, if you would like to buy from a local bookstore, please visit Hall Book Exchange.

Mark’s publisher is going through edits on his second book to be released later this year!  This one will be on survival and plants.  Will post an update on a release date and do a review as soon as we can.