An interview from the Slippery Rock University Student Newspaper with Cody Lundin.  Heads-up on a couple bad words if the kiddies are listening.  More than anything, posting this for one of Lundin’s perspectives on ‘survival’ television;  AND, why we like and list proven survival schools at this site, including Cody’s.

Kudos to Slippery Rock University on getting Lundin as a speaker.  I know you got MORE than money’s worth.

Lundin has been instructing students on survival skills since 1991, when he found the Aboriginal Living Skills School.

He stated that one of the most common questions that he’s asked is, “why don’t you wear shoes?”

“Indigenous people are my heroes because they’re the real badasses,” Lundin said. “Shoes take resources to make. Another aspect is walking slower and being able to pay more attention to the resources around you. The other aspect of that is that I don’t want to be a pussy and be holding somebody’s shoes. There are a lot of people who have a lot of skills, but if they lose their boots, they’re fucked. Do you want your life to be dependent upon what you have on your feet? I don’t.”

Lundin explained that when he began to teach, survival skills were not subjects that were taken as seriously as they are now. Because of this, his friends and family questioned his way of life. He stated that he believes that most college students go through a similar process of being questioned, and that they have to press through that in order to be successful.

“If you don’t make a living, then I’ll take extra fire sauce with my seven-layer burrito because you’ll be [working] at Taco Bell and that’s unacceptable.”

He separates his teaching style from others by using humor, imagery, and cartoons.

“My style is different than an outdoor survival manual, and it’s that way on purpose. One: because it’s who I am. Two: Because I know how people fucking learn. They don’t learn in a pile of drool with their head down trying to remember this person who has lost all passion for what they’re teaching.”

Lundin not only separates his books from others, but he also distances himself from other survival-themed television shows.

With that being said, he admitted to never watching his show, Dual Survival, because he believes that it would most likely piss him off. He stressed that his main focus was to teach students skills that they could use in order to potentially save their own lives, and be able-bodied American citizens. 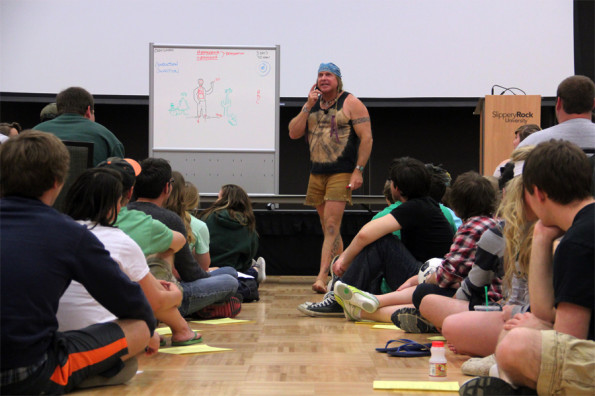 Cody Lundin explains the dangers of hyperthermia and hypothermia in his lecture about survival Tuesday night in the Smith Student Center Ballroom. He is the co-host of the Discovery Channel show Dual Survival and he has authored of two books.

(Editors Note from Master Woodsman:  I have seen that drawing in the picture having previously trained with Lundin several times.  See page 75 and 76 of 98.6 Degrees, The Art of Keeping Your Ass Alive!  Great Stuff!)