“Charlie is a rich, famous, arrogant, borderline genius…I like him anyway.  We first met in 1914.  His star was just then breaking on the far horizon.   I got introduced to him in a beachside diner by an old Montana horse wrangler pal of mine who was working in the moving picture business at the time. Somehow, we struck it off, and have been friends ever sense.

Folks in that dusty little town have always thought us a strange pair—one day walking the back streets with rucksacks loaded down on the way to who knows where—and the next day cruising Hollywood boulevard in Charlie’s new green Packard convertible (the back seat stuffed full of firewood, fly rods and canned goods).  Nowadays, I see him less and less.  I don’t get to that part of the country too often anymore…and well, let’s just say that Charlie (almost thirty years my junior) lives life at a bit faster pace than my own.

But, in those early days, we had us a time.  I think he looked to me for an escape.  We’d pack up and light out of town to camp on the beaches and in the hobo jungles up and down the coast from San Diego to Big Sur.  Chaplin was proud of his tin can cookery skills, and would delight in adding a fine bottle of wine or a fresh lobster to a tramp’s orange crate dinner table.  He admired the resourcefulness he found in the hobo camps, always contrasting it to the wanton wastefulness he witnessed among his well-to-do friends.  Say what you want to about him, he was truly concerned for those on the fringes of society.  As for the tramps themselves, they had problems separating Charlie the man from his screen persona…and that suited Chaplin just fine.

Last I heard from him, he’s busier than ever and hasn’t been camping in months.  He’s been working on a movie idea about the gold rush up in Alaska and wants me to help him put together some believable Klondike gear.  I guess it’s about time for a visit.  Besides, he promised to introduce me to Mary Pickford.” 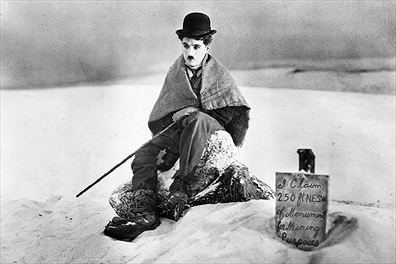