When I got out of college back in the 90’s, I thought I had the best job in the world as a ‘dirt’ forester.  Responsible for all land management activities on 100K acres, I spent over half my time in the field cruising timber, mapping, writing management prescriptions for reforestation, prescribed burning, and more…

Then I met a forester working for Hercules Inc.  Back then, Hercules made several by-products from ‘Fatwood,’ including gunpowder.  They had two foresters traveling the Southeast looking for and arranging the harvest of fatwood stumps.

What was especially interesting, and made me jealous, was how they went about their job.  They each use a trained dog to find the stumps… mostly after a clear-cut or in wooded areas that were (unfortunately) being developed.  The dog would sniff out the stumps and the forester would flag it for removal.  What a cool job; travel the woods of the Southeast with your best friend.

So why the Southeast when looking for fatwood?  Is it not everywhere?

The reason for the story is to remind those of us into Woodcraft that a great deal of the information around wood properties (and more) is commercially driven.  What we do is far more self-sufficient and not driven by business.  All that being said, it is generally associated that fatwood is just a Southeast thing because that is where commercial pitch production (the turpentine industry) was focused due to the high resin production from longleaf pine (Pinus palustris) in particular. 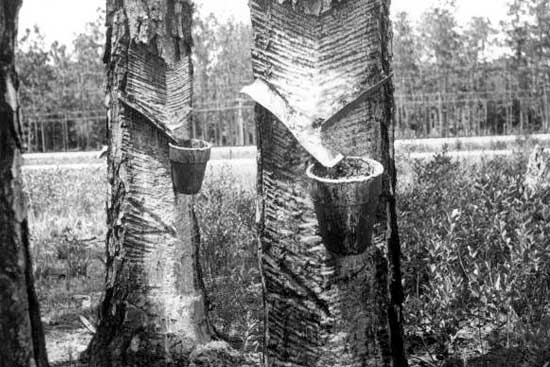 “Catface” from the turpentine industry. As a totem to the forestry gods, I used to have a remnant of a catface, complete with hanging turpentine pot, in my house.  Wife cured me of that when we moved.

However, there are well over 100 species considered to be a resinous pine around the world.  Where there is a pine tree, there is an opportunity for a resin concentrated (fatwood) stump near the ground.  While a little easier to find stumps after a clear-cut, here are few examples of what to look for in a mature forest… 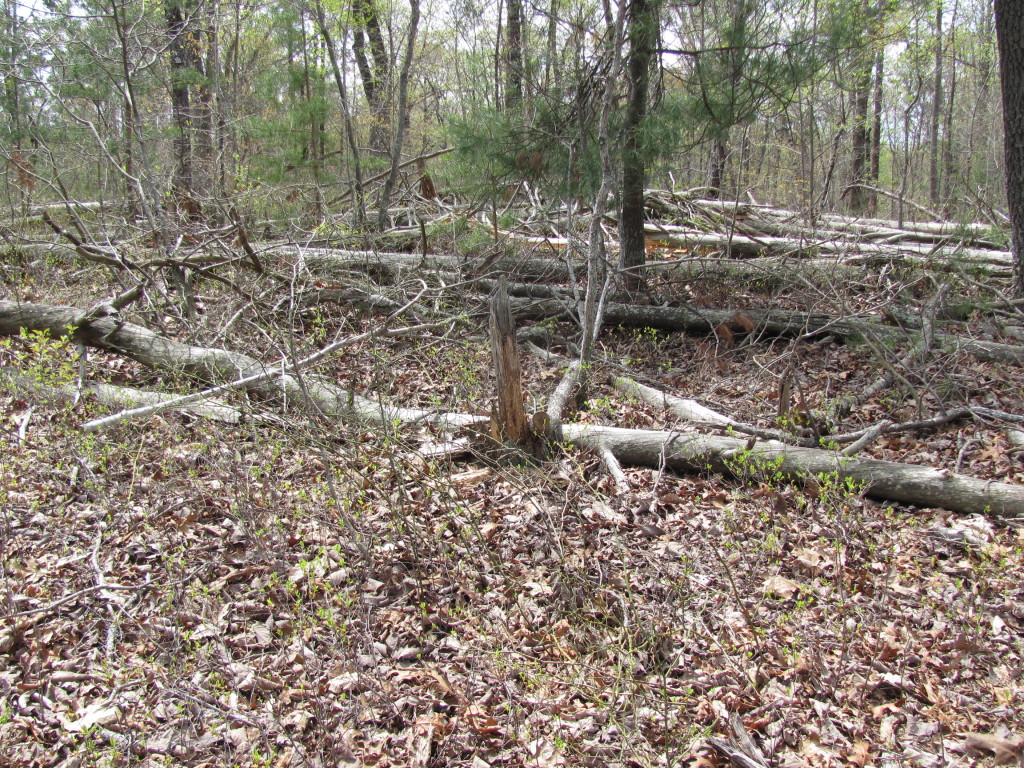 Fatwood stump in the center of picture. 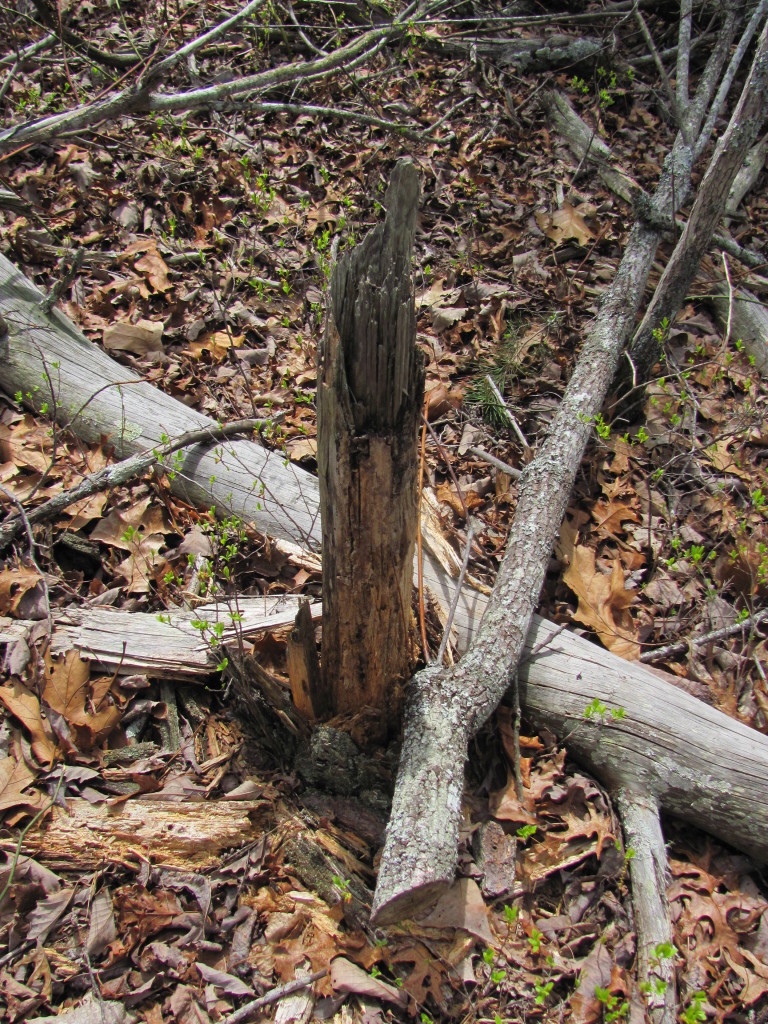 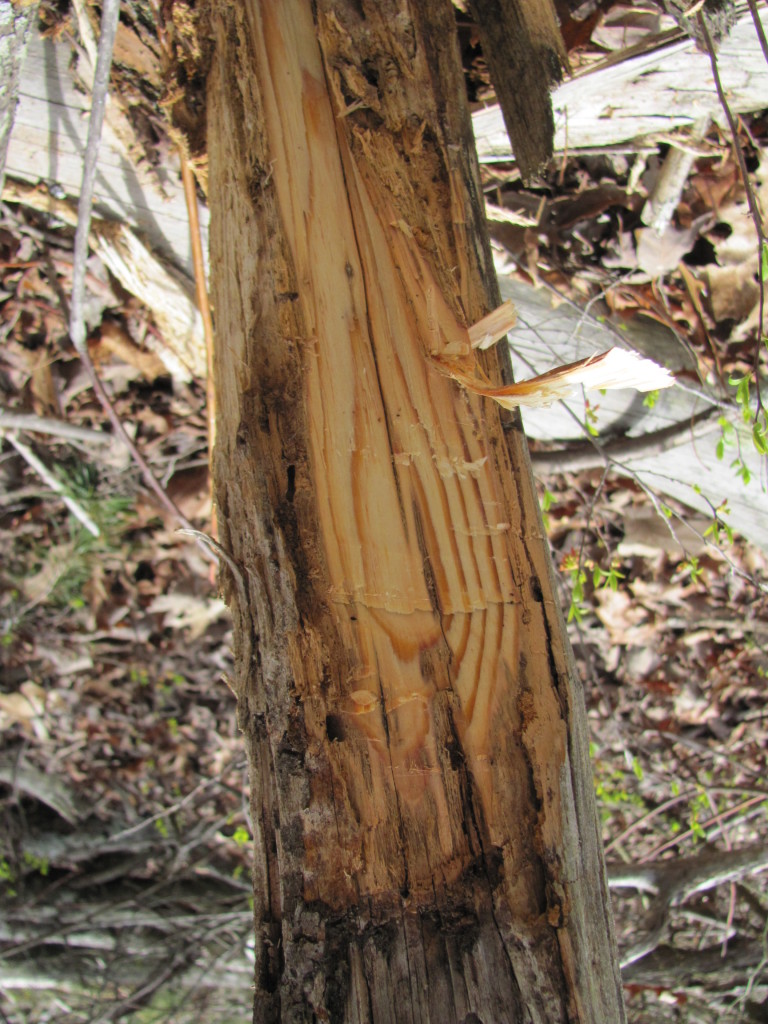 Until you cut into it! 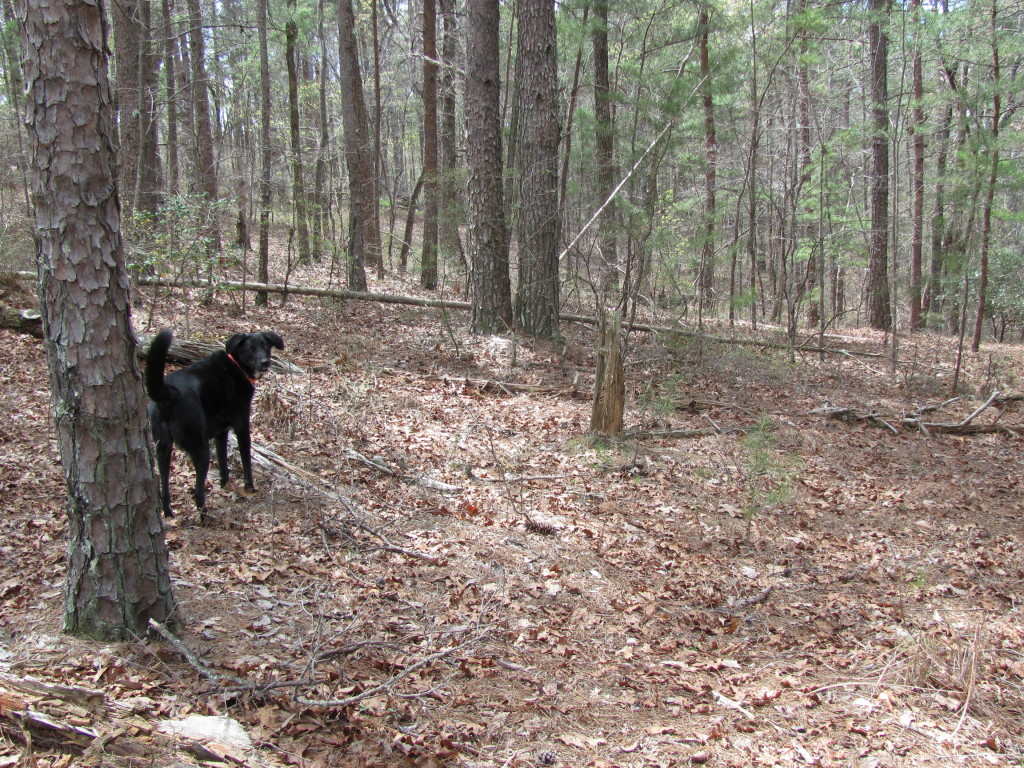 Another example of a fatwood stump. 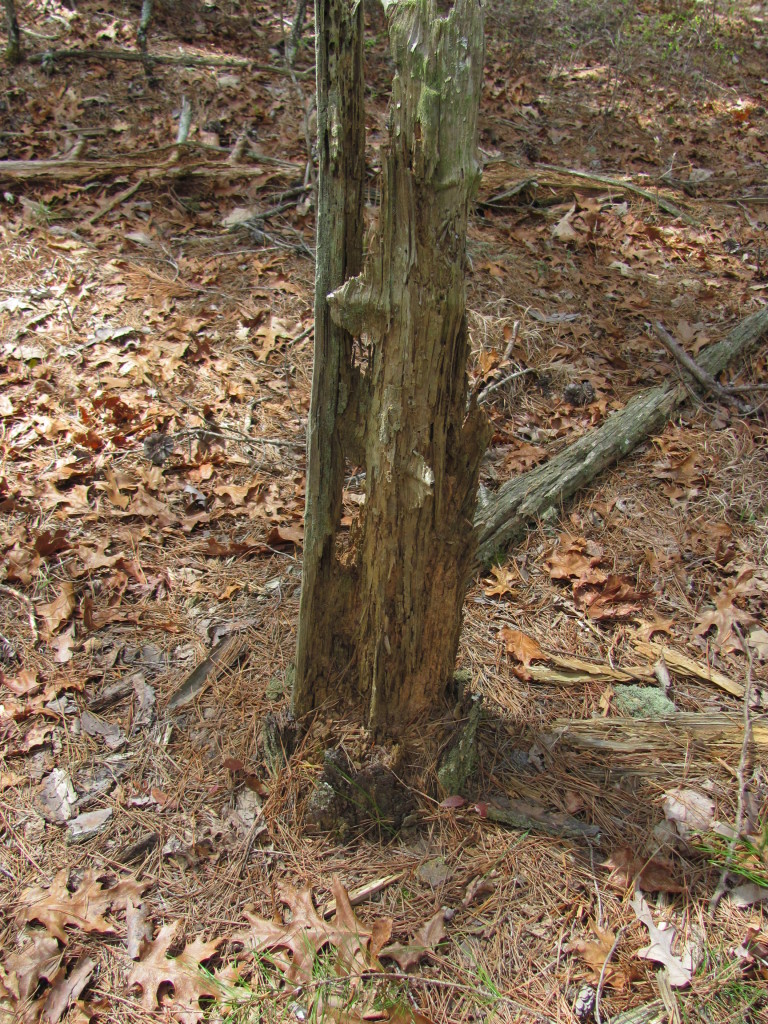 Note where some of the very decayed sapwood is hanging on the outside. 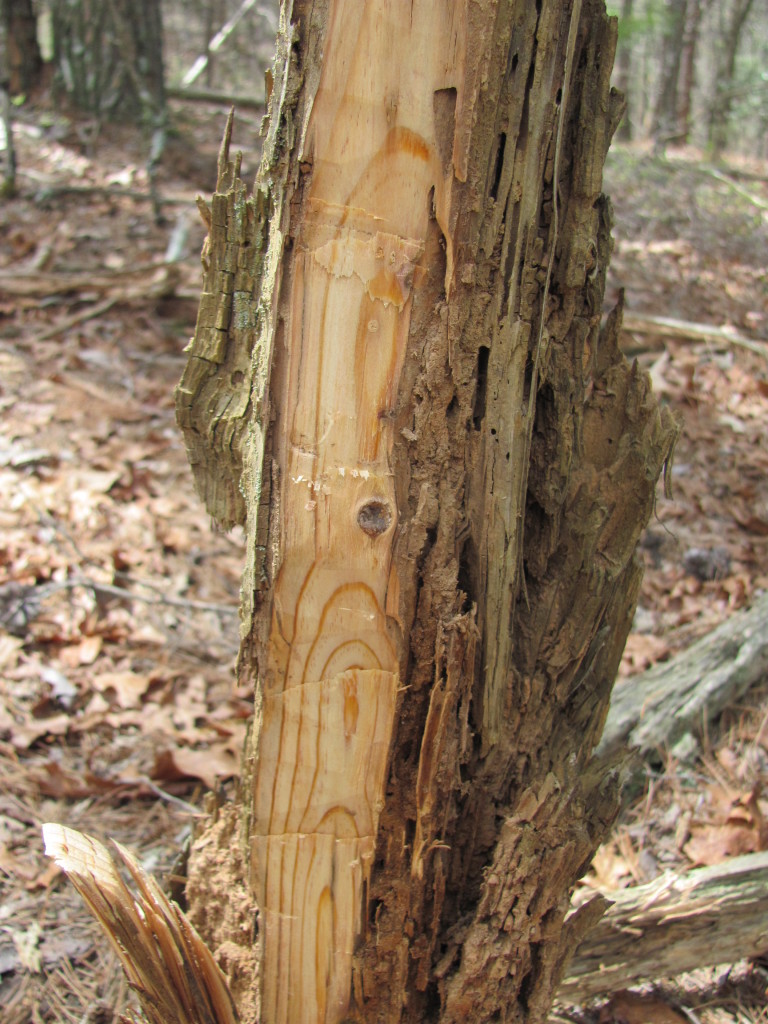 Again, fatwood at the heartwood.

Resin soaked wood may also be found in areas where a pine had been physically damaged and healed.  It can also be present where branches once grew from… pine knots.  To get the pine knots out, you can use the poll of your axe, or even a large stone, and hit the stem (trunk) of the tree above and below where the branch once was and then wiggle it out.

In some of the highly resinous species, such as Virginia Pine (Pinus virginiana), you may find fatwood along the whole stem at the heartwood, not just the stump like here… 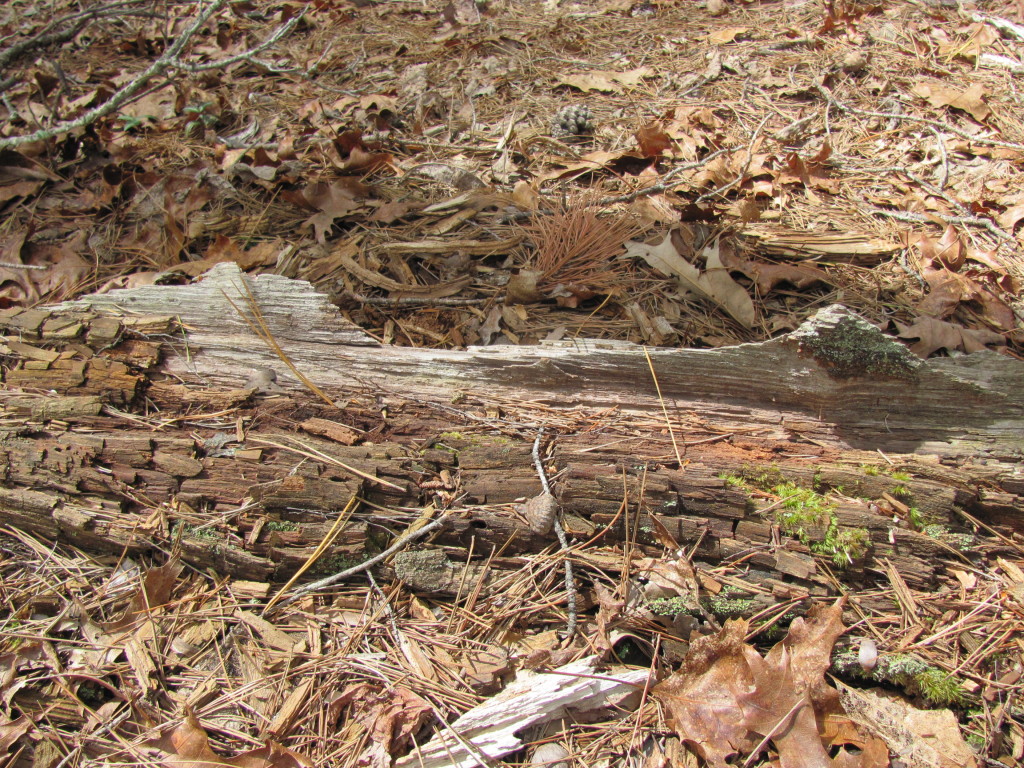 Just laying on the ground, you can see where the outside sapwood of this Virginia pine has decomposed greatly and the center heartwood looks solid. See what’s inside in the next picture. 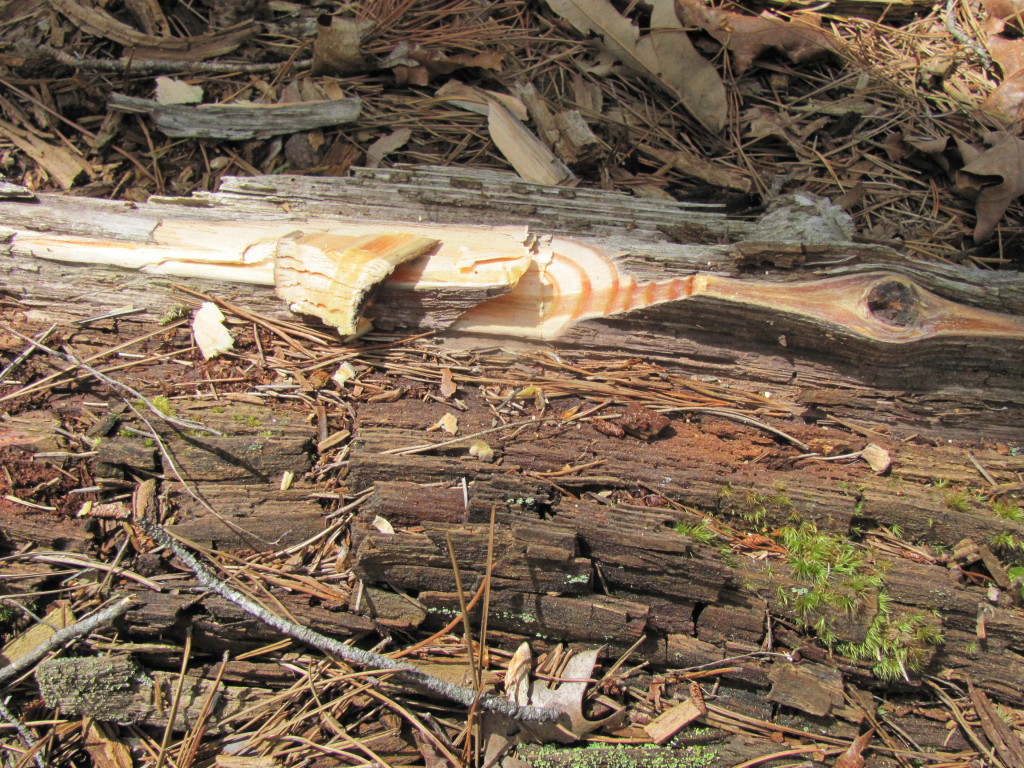 Fatwood from the stem, not just stump in some species. 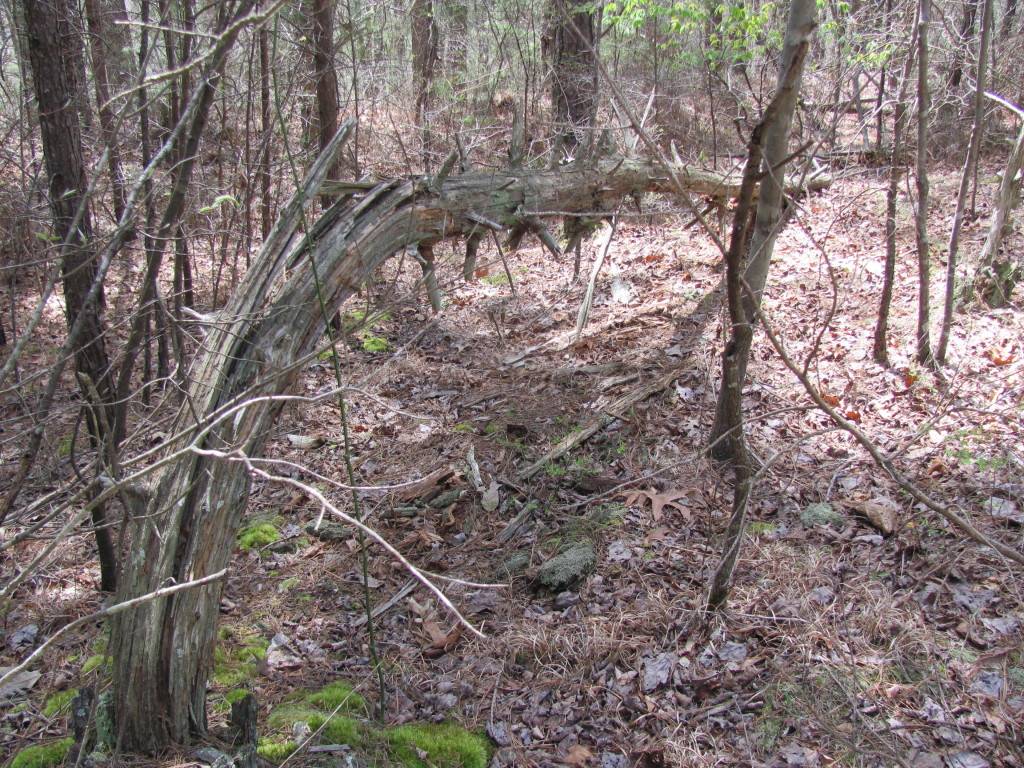 Another example of more than just the stump being fatwood. This entire stem is resin soaked. Being up off the ground, the weather has completely removed the now decomposed sapwood. Note the remaining short branches which are extremely difficult to break off — this lets me know for certain it is a Virginia pine (I live in Southern Appalachia). 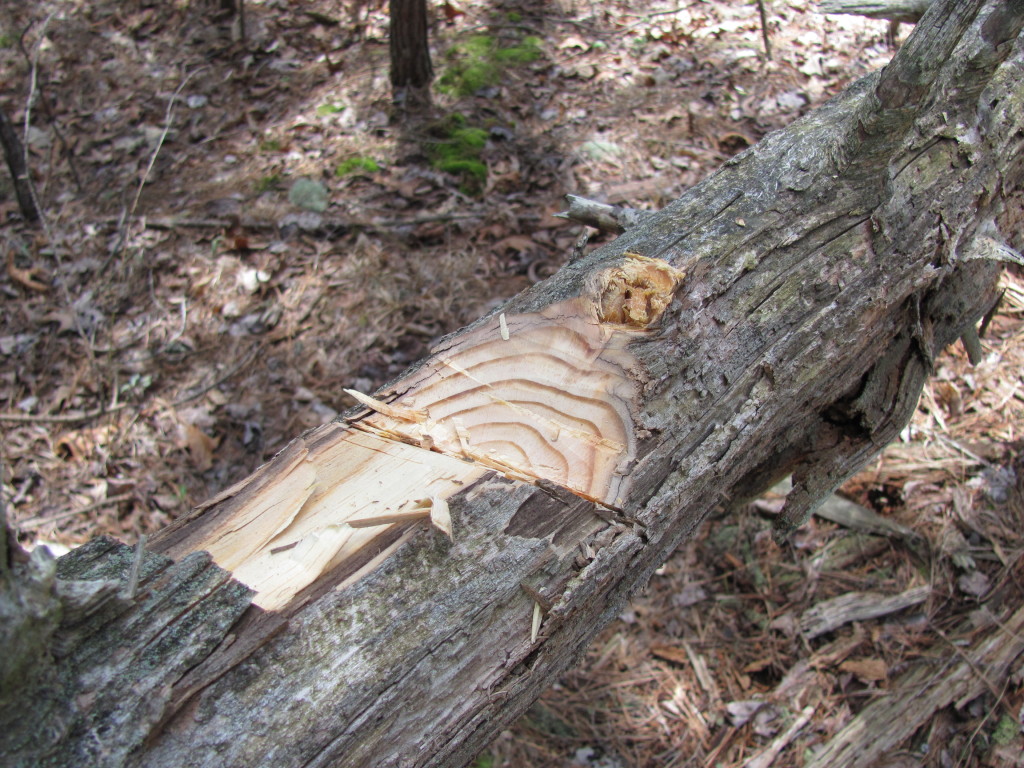 Again, many feet above the stump, resin soaked fatwood.

Many will associate fatwood with larger, older trees.  While an “older-tree” is the desirable trait in fatwood production, some trees may have been suppressed and may not necessarily be larger.  Species and decomposition of the sapwood may leave only a small stump (and stem).  I have found this to be especially true in Appalachia.

In addition to your sight… let your nose be your guide.  Once you cut into some fatwood, it has a fantastic pine sent.

As a Woodsman, we are not interested in the commercial aspects of fatwood.  We are specifically interested in that resin soaked wood for fire.   Rot resistant, highly flammable, essentially waterproof and fairly wind-resistant, it makes an excellent fire starter from shavings or scrapings from a hot spark, or split thin, it will readily burn from a lit match.

Due to the sooty smoke from its volatile oil, it is not recommended for cooking over.  However, I like keeping several fist-sized pieces or pine-knots by my campfire for additional light should I need it.   In addition to burning hot, fatwood burns brightly, more than enough to make a serviceable candle too.  Simply take a short piece around 6″, quarter an end down several inches and insert spacers.  I put a point on the bottom to stick in the ground making it a “hands-free” solution. 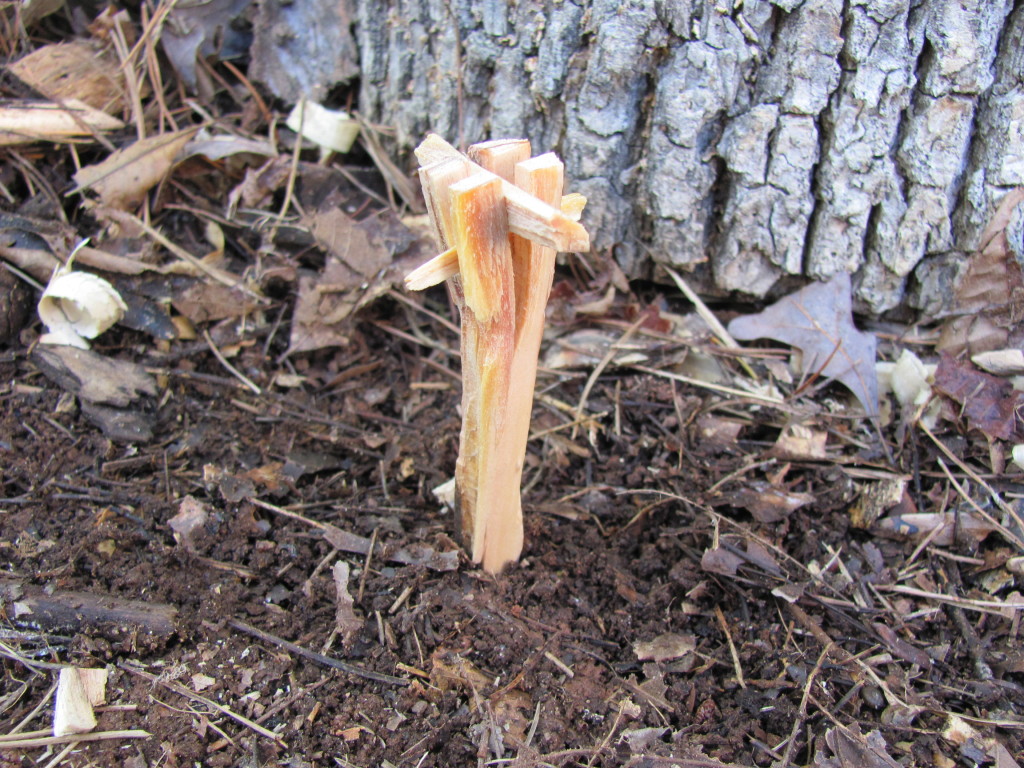 Fatwood candle prior to lighting. Note the spacers which are also fatwood. 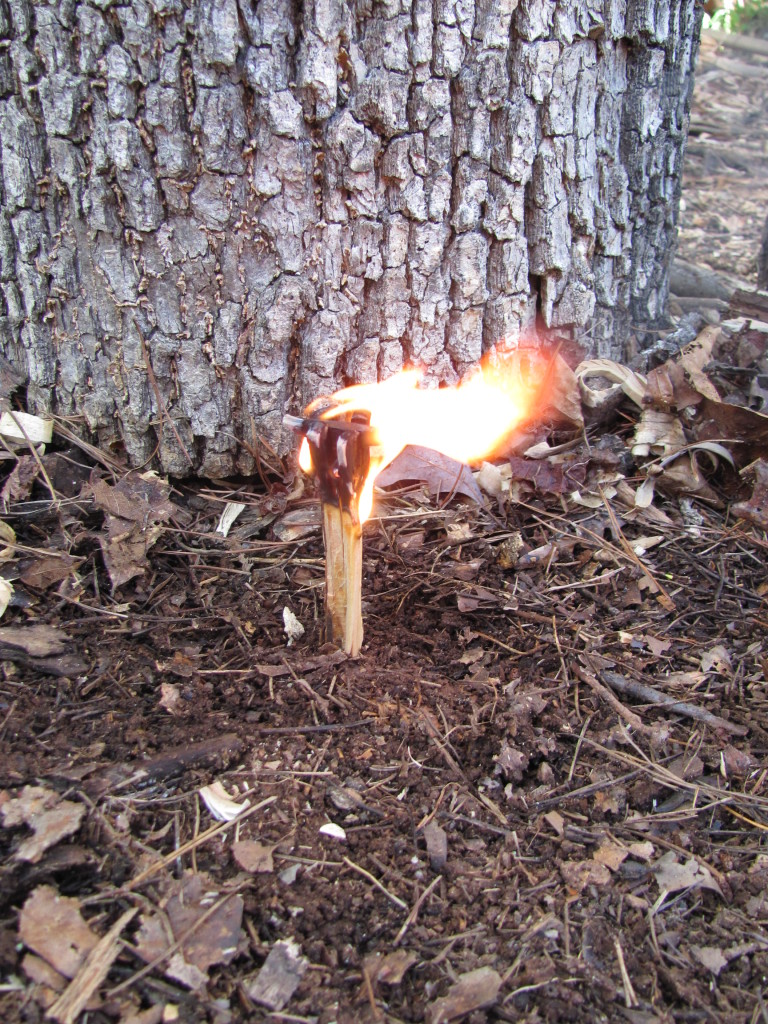 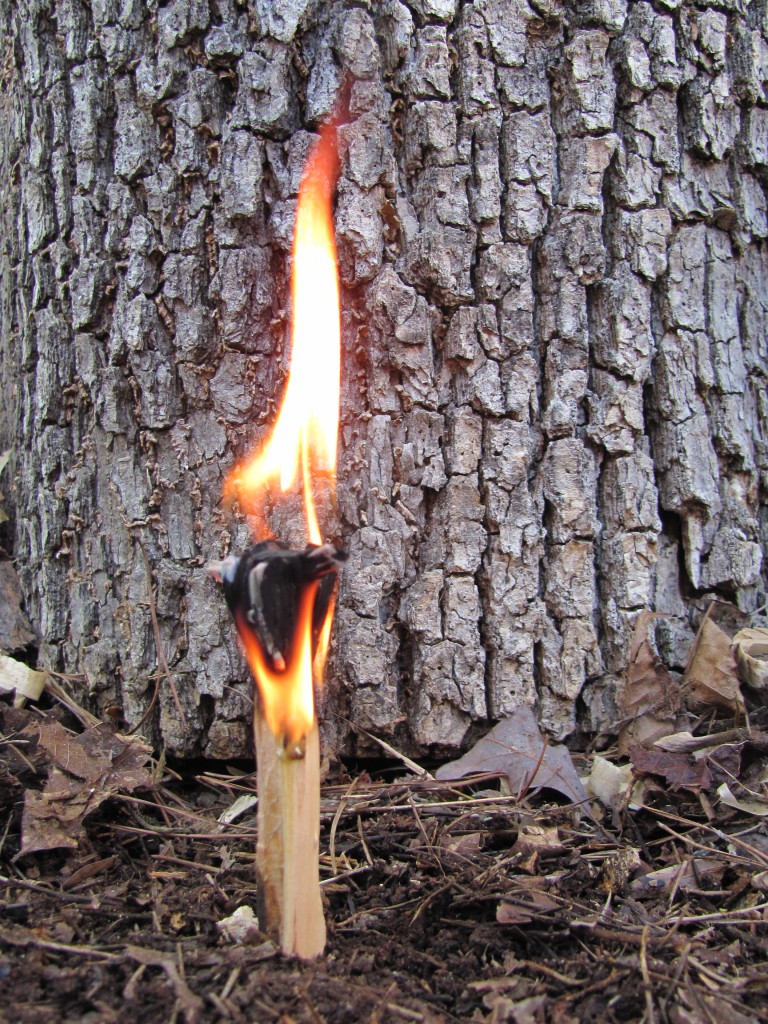 While I have learned a lot first-hand from Mark Warren of the Medicine Bow Primitive School (see our school listings), the fatwood candle was a verbal.  That being said, I have never been in the presence of anyone else’s before. In my limited number of samples, depending on conditions, I usually get 5 to 10 minutes burn time.

What’s in a name?

I have also known or heard Fatwood called, “Lighter Knot,” “Fat Lighter,” “Rich Lighter,” “Lighter’d” and “Pitchwood.”  How it got those names I can’t confirm.  One of the wives’ tales I heard was that when heated, the oils oozing from the wood resemble sizzling fat.  I am sure there are other explanations and would love to hear them, so let us know.

So how is it made?

There is very little documentation I could find on the natural process of how fatwood is created.  I recall being told by Hercules they were unsuccessful in their research of recreating the necessary conditions for the purpose of “farming” fatwood.  Please keep in mind that was back in 90’s.

Although less resin concentration than naturally made lighter’d, in Scandinavia they do “randbarkning”.  If you click on the link, depending on your browser, you may have to go to Google Translate.   Nonetheless, an interesting process.

The mentions of fatwood in literature are few, usually as a tangent when discussing Colonial history and Naval Stores, which has its own interesting history.  Pine pitch (sap) has many commercial uses even today.  For the woodsman, it works well as a fire accelerant and makes an excellent pitch glue when mixed with charcoal, but that is another article…

In my search for answers, I was pointed to a great resource, The Forestry Forum, where I befriended fellow forester Danny Hamsley.  Here is a great explanation from him…

“Pines have structures called resin canals.  These resin canals are essentially tubes that run from the core of the tree radially out to the bark.  These canals are filled with the sticky resin that we sawyers are all too familiar with.  The tree uses this system to defend itself against injury.  When the outer skin of the tree, the bark, is damaged exposing the cambium and the wood, the tree shunts resin along these canals to coat the injury and isolate it.

Also, this resin system is how pine trees protect themselves against bark beetles.  When they bore into the bark to the cambium, the tree responds with copious amounts of this resin, commonly called pitch.  You can see this accumulation of pitch on the bark of a tree attacked by bark beetles.  They are called pitch tubes, and are a telltale sign of bark beetle attack.  If only a few beetles attack a tree, as is usually normal, the tree is generally successful in repelling the attack via the resin canal system.  However, when beetle populations explode cyclically, the beetles overwhelm the tree’s resin defense, which leads to death of the tree. 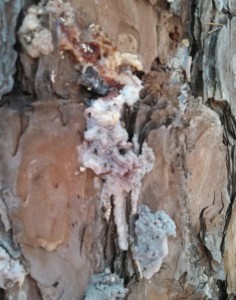 As a tree ages, it shunts excess resin to the heartwood.  In some cases, this resin “dumping” is such that heartwood becomes totally soaked with the excess resin.  Maybe these trees are “super resin producers.”  In any case, some trees are more prone to store this resin in the heartwood than others.  Also, age has an important effect.  There must be heartwood before it can become resin soaked, so the tree has to have reached a ripe old age where there has been a lot of heartwood formation.  As a tree gets older and larger, the tree uses the heartwood to store extractives and resin since the cells in the heartwood (longitudinal tracheids) no longer function in transporting water to the crown.  The functioning water transporting cells are in the sapwood.  So, since this heartwood is not functional any longer, it becomes the dumping ground for resin and other stuff. And, we get lighter wood.”