February 2002. I had been up late packing food and gear for our 10-day snowshoe trip in the mountains along the Maine and Quebec border, and after driving four hours to the trail head I was feeling tired and groggy despite 2 cups of coffee. The temperature had warmed throughout the morning, rising to near freezing and allowing the precipitation that fell to be neither snow nor rain, but ice. As we unloaded the gear onto the 9-foot high snowbank shoulder of the road, I grabbed my bag and tossed it up to waiting hands on the top. It felt smaller and lighter than I thought it should, so I scrambled to the top of the snowbank and looked inside of it. All of my personal gear was neatly packed, with the exception of my sleeping bag, which wasn’t there.

I had two problems to solve. First, I had to figure out how to stay warm at night with no sleeping bag. Thankfully we were traveling with a canvas tent and a wood stove, so the solution was obvious; find and cut large quantities of good firewood. The second problem was how to turn this into a learning opportunity for the group and not just a forgotten piece of gear.

After parking the van at the border, I walked back to the trail head, put on my snowshoes, and followed their tracks for a mile before seeing the toboggans. People were busy setting up camp, and I immediately started setting up our group tent. Working quickly, I had the tent and stove setup in record time. My motivation was strong, knowing that I needed to make a thick bough bed and gather good firewood before dark or risk freezing overnight. As the sleet fell I moved as quickly as I could without breaking a sweat.

When darkness fell I had gathered enough boughs for a decent bed and a substantial amount of wood. Had it been forty below it wouldn’t have been enough, but in the balmy temperatures we were enjoying it would be sufficient. After dinner I told the group about how trappers used to travel without sleeping bags or blankets because they didn’t have room on their toboggans. It was a common practice for them to sleep in their clothes on a bough bed next to the wood stove. I also related how it was a test of manhood to see who would have to stoke the stove first, and that they’d often be stubbornly pretending to be asleep while the temperature in the tent had neared the bitter temperature outside.

As the candles burned down and people dropped off to sleep, I began to get ready. I put on all the clothes I had and laid some firewood between me and the wood stove to stop me from rolling into it in my sleep. I also stacked wood along the outside of the tent to stop any cold drafts. Before I blew out the candle I looked at the other six people in the tent, all snuggled down into their sleeping bags. I loaded the stove, then blew out the candle.

I woke up cold several times though the night and stoked the stove. Once it had gone completely out and I had to light it again from scratch. When the first light from the pre-dawn sky was visible, I had slept for about five hours compared to everyone else’s 9. But I had slept enough, and the following nights I’d sleep better. When it came time to wake the group I loaded up the stove and got it roaring, cooking them from their sleeping bags.

Shedding beliefs and ideas about what can’t be done is worth doing, even if it isn’t always easy or comfortable. One result of my career as a guide has been the long trail of shed beliefs. My experience on this trip made me feel more at home in the forest, and better able to deal with unplanned situations by forcing me to put knowledge in action. The role of the guide is supposed to be that of an expert who doesn’t make mistakes. However well entrenched this belief is, it’s false. Every guide I know has made mistakes, but those worth their salt have dealt with the circumstances and still had a great trip. Maybe this, instead of not making mistakes, should be the mark of experience. 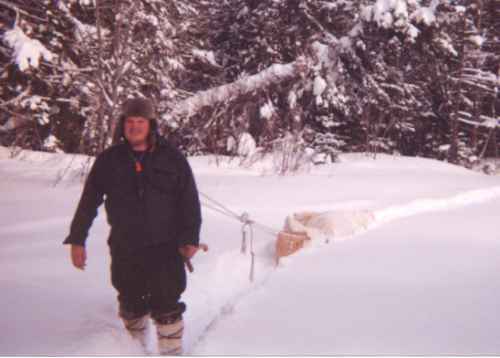