is a model of neatness and order.”  –Daniel Carter Beard 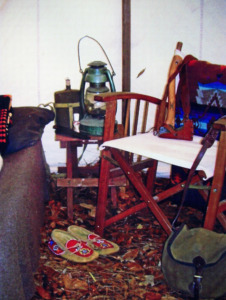 Your camp is a very small world—whether it be a simple lean-to with the most Spartan of amenities, or a fully furnished Home in the Woods.  That small world can quickly spin off into chaos if an effort is not made to keep things in order.

Neatness in the traditional camp goes way beyond a fussy affectation.  An orderly camp is an efficient camp—and it is safer.  It allows you to know where things are—the old “a place for everything and everything in its place” idea.  The unorganized camper may have the experience of searching through a jumble of gear for their matches in the middle of the night only to jab their finger into the edge of an unsheathed knife. They must then continue to fumble and dig through a pile of stuff in search of their first aid supplies to deal with the cut—and they’re still in the dark.  Get smart, get organized—Uncle Dan is watching!

Modern Hunter-Gatherer
Special Report: The Dangerous Side of Survival TV