Seek Outside Back Country Shelter

I’ll be reviewing the Seek Outside Backcountry Shelter or BCS as it is commonly referred to.  This is the 1+ year review and what a couple years it’s been.  I think in order to give the most complete review of something, it has to be very heavily used and really put through the wringer as anyone who’s ever camped with me will readily tell you.  A friend Dale once said I just shouldn’t be allowed to test gear.  He can certainly attest.  This tipi/tent hybrid didn’t get away entirely unscathed, but I’m confident that after just many long winter months and a record wet spring it can stand up to my critique. 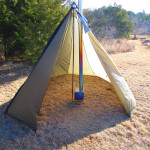 Evan Hill, owner of HPG, had great things to say about this shelter that starts at  $600+.  As did my friend TurkeyTracks from a forum.  His Seek Outside BCS at the 2012 Woodsmoke was the first I had seen when I was then contemplating the purchase of a small Kifaru Tipi.  He loved his BCS.  Thank you and thank your family for the Moose Drool too.  After some  comparison between Kifaru and Seek Outside, I knew that this BCS/George Tent spinoff was my next purchase. 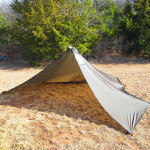 Personally I found myself buying the addon panel with bugscreen.  It was too small for 2 people plus winter gear otherwise.  Anyway I wanted bug coverage without buying a nest and no worse than our bug season is after a 12 yr. drought, it was a no-brainer. 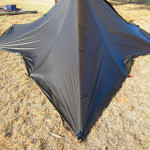 Other add-ons I purchased were the medium titanium stove, a second round of stakes, and the water cap for the stove pipe. Of these I still have yet to use the water cap.  With a stove full of Bois d’arc, most of the storms I rode out could not kill the fire.

It is a nice shelter for 2 people and has been through some pretty good storms. 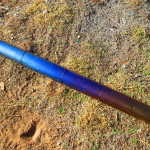 In December of ’12 I had the entire tent pitched in an alternate configuration.  It was really more of  an A-Frame tarp extending off the BCS as a porch with a standard 10 x 10 tarp.  We got upwards of 60 mph gusts of hail and rain that night and although my tent mate fuzzy almost took a red hot stove pipe to the face, I slept soundly knowing the shelter would hold strong. 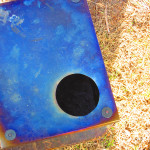 The next morning there were no blown tabs or rips and although I haven’t configured it in that same way since, I’m confident this shelter is strong enough.  All of the tabs are mega stitched and they aren’t going anywhere without a fight.

It survived a chaotic storm on the St. Paddy’s Day Gathering…  It was lightning and snowing at the same time.  Of course it was windy as well. 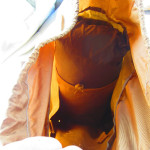 Tent, stakes, stove, and center pole all fit in a hydration bladder pocket.

It survived so many inches of windswept rainfall in the Spring of ’13. There were 2 times I had to take it down and go home because of twisters in the area including an F2 less than a mile from us.  Hey, what’s a guy gonna do?

So what’s wrong with it?  Well I’ll start with the tiniest of issues and work my way to the elephant in the room. 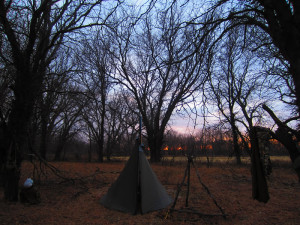 I don’t think the carbon fiber pole needs it’s own sleeve replete with drawstring etc.   Just stuff it in there with the bag and stakes!  I’ve yet to find an actual use for this item. 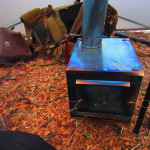 The red Y stakes are ideal for somewhere else and I had them ALL fail in my territory.  I recommend going over on weight to supply the customer with a better all around stake that can’t be affected as easily by hardened/compacted earth – gypsum, limestone, or otherwise.  I bought the black Easton stakes from Seek Outside and they seem much better, though, natural stakes I’ve often thought were the best anyways. 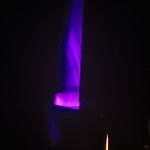 The first assembly of the stovepipe was a nightmare!  I didn’t know I was gonna need 2 people and possibly some band aids or steri strips.  The titanium needs to be ‘cooked’ into form and then it’s an easier process. I eventually got it on my own without any cuts but that’s because I’ve always got a pair of fencing gloves nearby.   I learned when I got home from that first Thanksgiving trip in ’12 that SO has a video making the stovepipe assembly.  Why not add a quick note about that with the receipt or something?

Stove size wasn’t what I expected.  I could have sworn this was the small when I got it.   A fully loaded medium stove will last at most approx. 1.5 – 2 hrs  with well seasoned hardwoods that are cut just to the right size (only about 6 ” long pieces ideally fit in here).

You have to make a choice; feed this thing all damn night or let it go out and wake up freezing.   I don’t like those options in the heart of Winter but for a true 1 man shelter, you won’t get a much bigger stove in there.   After 2 rough winters this stove has just about had it and I don’t see it lasting through a third season of abuse unless I hammer it out in the shop and sort of re-form it. Gonna need new material for legs.  It has rusted up, I’ve lost all the feet, and most of the pipe rings.

After about 3 trips with this setup, I quit breaking down the stove after each use because it just wasn’t practical anymore.  It had been kicked, turned orange all the way up and down, dog trampled, windswept with the door open, turned into a wind forge, and a whole lot more.  I don’t know anything about this metal but there is obviously the trade off between weight and the longevity of the design.

The spark limiter piece that goes in the bottom of the pipe was no match for Bois d’arc popping up embers and burning close to a dozen holes in the fabric over the course of 2 winters.  It eventually disappeared anyway.

The zipper flap is melted at the top where it’s in close proximity to the stove pipe.  the material for the stove jack is nice but threading the pipe has left it cut up and no longer a tight fit.

The Back Country Shelter can be pitched in a variety of configurations.  You can even use it with a hammock.  I’ve pitched it without a pole as well.  Just toss a line over a tree branch.  Without stakes and the pole or the stove, you’ve got one heck of a lightweight shelter option.

IS IT WORTH IT?

All in all this is a great investment.  Honestly most folks won’t beat theirs up as bad as I have.  I purposely abused this shelter to see what it could really do.  Verdict?  It passed the Plainsman test.  This is one of the best shelters on the market.

If you’re interested in Seek Outside or the Back Country Shelter, go check out their website.  From my own research, I’ve determined that SO products are built beefier than Kifaru for less money.  Should be a no brainer!