Wild Woman Claire Dunn: a Me vs. Myself Survival Story

A lot of people talk about “getting away from it all.” This woman did it Australia. For that, and the increasing interest in rewilding here in North American, I felt it pertinent to share her story from The Morning Bulletin…

IT WAS another morning of missing lunchbox lids and avoided voicemails when a familiar voice cut through my muted fear and loathing.

It was my former uni housemate Claire Dunn. The Hunter Valley girl is all grown up and she’s promoting her new book A Year Without Matches on breakfast television.

Her book chronicles her year spent in Gumbaynggirr Nation near Grafton with six others.

In search of herself, Claire spent 12 months in “supported solitude”, triggering an unexpected detoxification process, an “emotional cleansing” that flushed her system with old memories and “monkey-mind” voices. It wasn’t on her agenda, but it was good; re-introducing her to the wild woman – an archetypal energy resisting domestication.

“I was burnt out. Exhausted and getting really disillusioned. I felt like I was skimming the surface,” she explained to her TV hosts when asked why she decided to give up her stressful job and relationship to find herself in the forest.

Claire and I hadn’t connected properly for 15 years. Her path as a forest campaigner with the Wilderness Society running parallel to mine as a working mum from Lismore with Tupperware issues. But clearly we’d ended up in the same place. Deskbound, Domesticated. Desperately disillusioned.

So when she later toured town as a “rewilding” advocate and author, our paths crossed. Unlike the TV hosts, I wasn’t interested in a Bear Grylls-style Man versus Wild narrative. Hers was clearly a Me versus Myself survival story.

I had to know. How did her wild woman come out on top? 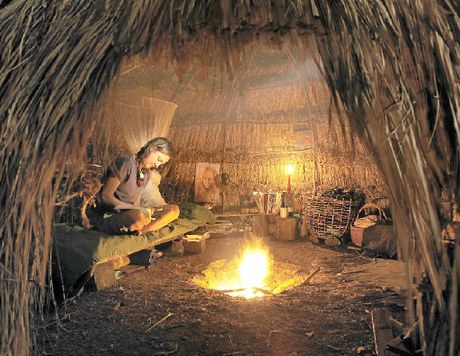 Read the rest of the story HERE.

A Bedroll Sling/Tumpline for…
“Survival is tough, but it’s tougher when you’re stupid!”