Why Carry A Knife (and Fire-starter and Cordage)

There are very few things in this world outside of breathing, eating, etc. that I feel I need to do. Of those few, one of them is carrying a knife.

I know I am not the only one, many of you reading this feel just like me. Perhaps it’s in our DNA. Personally, this desire of having a knife on my person at all times started even before Cub Scouts at age six or seven. A time in the 70’s when Scouting encouraged you to carry a knife I might add.

I can hear what some of you are saying… in our DNA, are you kidding?

Homo habilis was using stone flakes and discoidal knives 2.3 million years ago. Let me write out the zeros for you… 2,300,000 YEARS! Just a rough guess, that’s 70,000 or so generations.

1.5 million years ago Homo erectus took it too another level with the hand-axe of stone and fire use. The badass of the ice age, Neanderthal, started using more specialized cutting tools for scraping, boring and spear points some 100,000 years ago.

In the Upper Paleolithic Period (30,000 years) man as we know today was making long leaf points of stone and spalling off multiple knives from one rock-core. And just 9,000 years ago, we get man in the Mesolithic period carrying flint daggers in leather sheaths, carving advanced tools from wood and bone, and using micro arrow points with the bow for hunting. 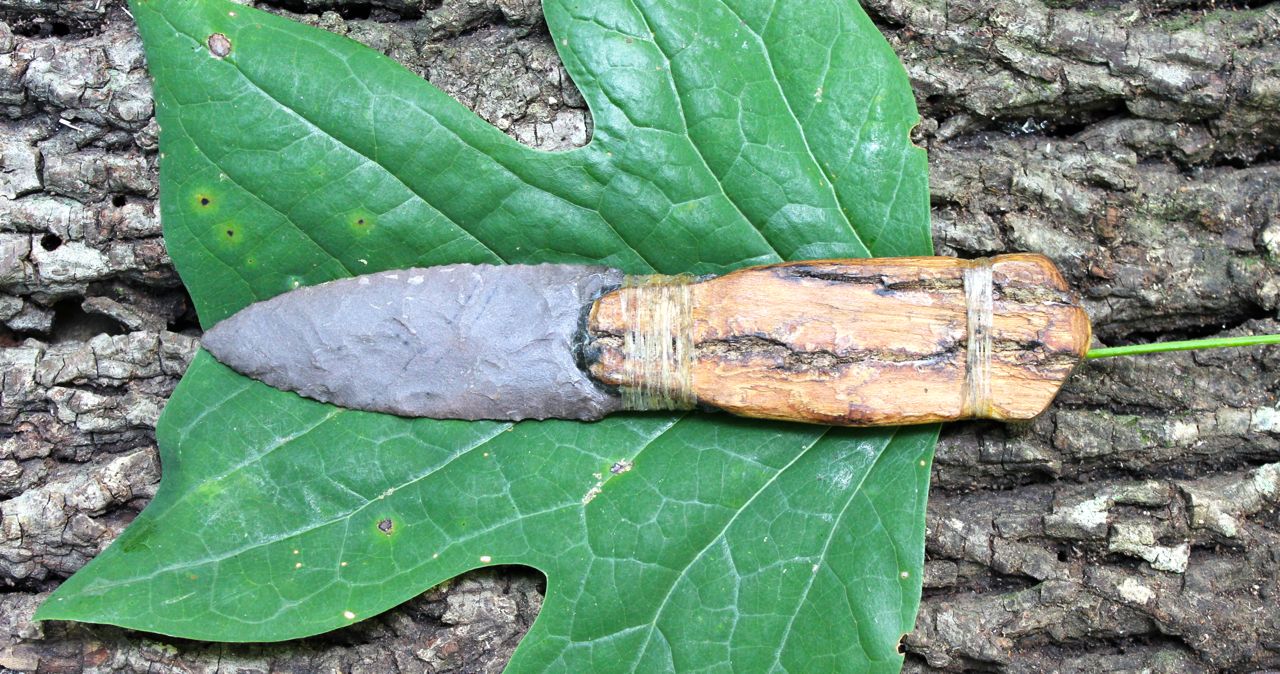 Man’s lack of fang and claw put him at a disadvantage in separating matter. That is until he discovered the sharp rock. With fire and cordage added to the power of cutting tools, he had the foundation to make everything else he needed. Those three tools were the building blocks of civilization!

It wasn’t until the last 10 to 20 generations (depending on your heritage) that we got away from these three basic tools. And that is out of roughly 70,000 generations and a genetic stock that you and I both share. I know, its scary, we’re related.

Why did this happen?

The nail, glue and duct tape have replaced cordage in holding our lives together. Fire now comes to us through a copper wire straight to our homes keeping us warm, cooking our food and lighting the way. And the convenience of modern society and OUR government have neutered us when it comes to the knife and self-reliance. All very recent history.

Defining Wilderness (stay with me now)

Most equate wilderness to one or both of the quotes below, and I will certainly not disagree:

For the purposes of this article, I rather think of it as a concept based on an individual’s perspective. As an example, an eskimo traveling by dog sled would say that his home is anywhere he travels across the frozen tundra. Our eskimo friend in the Sonoran Desert, now that’s wilderness.

However, for the context of our continuing discussion, broadly speaking, wilderness is also:

“Ultimately there is only one wilderness, and we are a part of it.”
– Thomas J. Elpel, from Participating in Nature

Put in perspective, Elpel is right, ultimately there is only one wilderness. And while you and I may understand this concept, most of humanity won’t see it unless their modern (read fragile) ecosystem becomes disrupted. Combine that with what modern man has lost in basic outdoor knowledge… Yikes! Remember, those basic tools, which had daily use, have all been replaced for the most part in that last 0.01% of our existence using tools.

When bad things happen unexpectedly, especially without the modern conveniences of which we are accustomed, that can be a bad deal for the unprepared.

However, with some basic knowledge and practiced skill, there is no reason why you or I can’t recreate relative comfort as our ancestors did. Having said that, call it common sense or primal instinct, I have a knife, paracord, and metal-match in my pocket or around my neck, always. And even more near by in a kit, my Jeep, the home, etc… 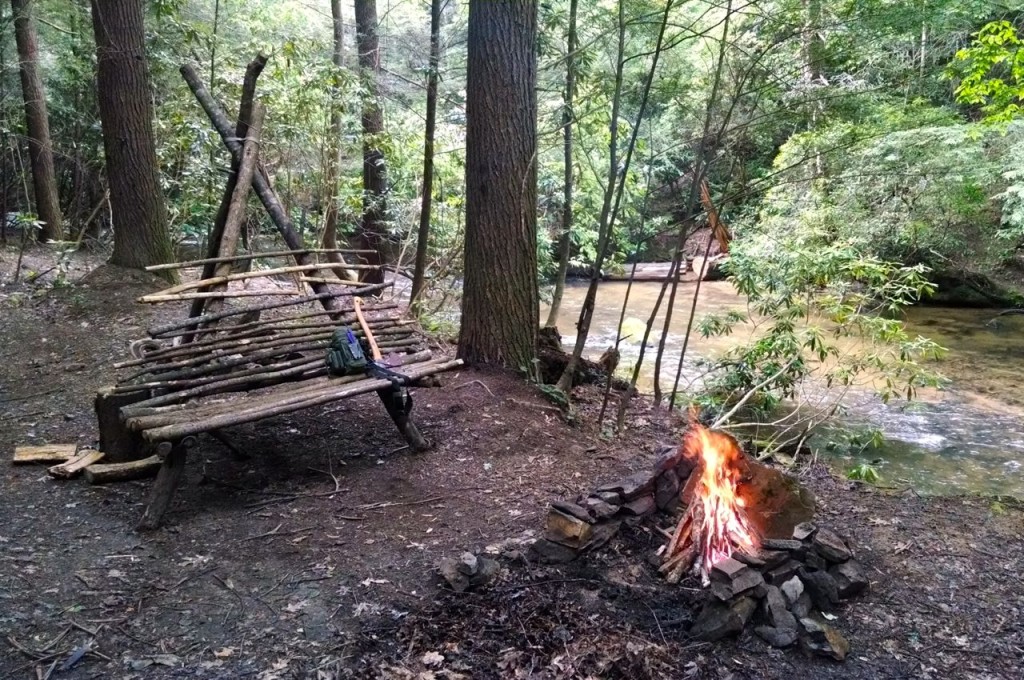 I’ll be the first to admit, my knife gets used more for opening boxes and packaging than anything else. And as tough as those damn plastic packages are these days, I would argue the knife is a modern survival tool more than ever! 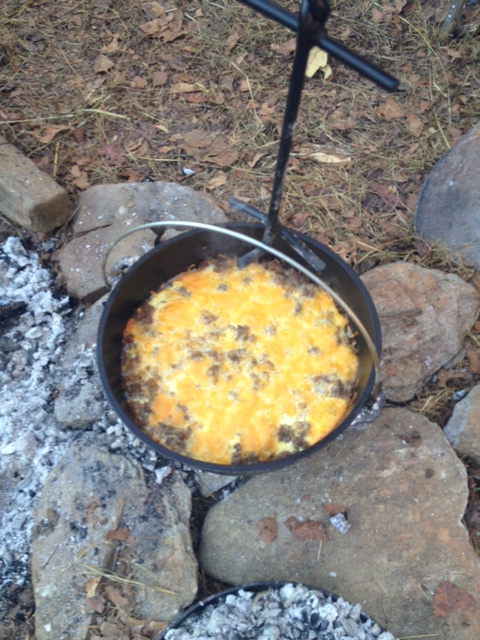 How about some Mountain Man breakfast?

There are also those times when I am camping; preparing food for that camp meal over an open a fire, a pot hanger made from wood, carving a spoon, marshmallow sticks for the kids, and other woodcraft. I need a knife for all that too. Getting a campfire going in wet weather in particular would be especially helpful with a knife. 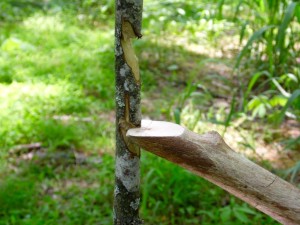 Pot-hook notch carved by a knife.

Oh yeah, and when I go fishing, for cutting line and cleaning fish. As well, during hunting season, a knife is needed for cleaning game. Sometimes I need a knife to harvest the edible part of a plant, or look at a twig’s pith to see the specific characteristics of a tree for identification.

Hobo fishing with a can.  Photo: Duncan Noble

“A knifeless man is a lifeless man.”
– Nordic Proverb

And while those are good reasons to grab a knife and use it for a specific purpose, you never know when you may get thrust back into the wilderness, or at least that is what most think and why they carry a knife. I ALWAYS carry one with me because there is only one wilderness.

Author’s Note: the history lesson, and more, in this article came from the direct tutelage of Steve Watts and his great book, Practicing Primitive: A Handbook of Aboriginal Skills. The stone knife pictured is a treasured gift made by Steve. As Watts says, “it’s all about… an edge, a flame, and a brain.“