By Christian Noble on September 12, 2013 in Master Woodsman, Wilderness Survival

Survivorman’s Secrets of Survival T.V. show by Les Stroud caught my attention yesterday when I saw several bloggers posting about the first episode, Fire.  Why it caught my attention is several fold.  One, I have the deepest and utmost respect for this sacred element and know what it means for a woodsman.  And two, with Les Stroud being Canadian, I was very curious if the name was a play on a book of a similar title, Survival Secrets by Brian Emdin.

Emdin is considered one of Canada’s experts in survival skills and a former senior instructor for the Canadian Forces Survival Training School with over thirty-five years of experience.  In Emdin’s book, he argues the psychological and physical rationale for memorizing the plan below taught as a drill.  There is strong emphasis on fire which for all intents and purposes he puts at the top of the priority list:

…The survival plan described in this book is the most effective plan in any environmental emergency. It establishes priorities and can save your life in a survival situation. This simple survival plan does not rely upon detailed techniques or specialised equipment. In an actual survival situation, rapid progress builds confidence. Confidence helps you to concentrate, to focus, and to think clearly. These attributes significantly increase your ability to innovate and effectively solve problems.

You must memorise the plan: this will program you to function effectively even if you are traumatised. You must commit yourself to initiate the plan immediately in a survival situation and to complete it without deviation. Keep the entire survival plan in perspective. Avoid spending too much time and energy on any one endeavour. You will read this advice several times throughout this book. Repetition will help program you for survival. You must execute the plan in sequence. You may not be injured and therefore may be tempted to by-pass first aid; however, survival first aid includes checking for danger to yourself and others before continuing with the survival plan…

With Emdin’s strong focus on fire in Survival Secrets and Survivorman’s Secrets of Survival first episode on fire, and shelter next, there does seem to be a correlation.  I guess we will see in the weeks ahead just how strong a correlation. 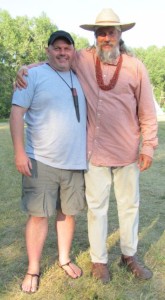 As far as the T.V. show…  I like Les Stroud; anybody that works with and appreciates David Holladay (a true Master Woodsman), as Les does, is automatically O.K. in my book!  The fire episode and Les’ ranking of tools for fire I take as his own (based on his skill level as he mentioned), and based on the premise and resources or lack there of in the show — not one you or I should equate to ourselves.   I will leave it at that.

Survival Secrets the book does a good job of covering the individual components of it’s plan as well as clothing and survival kits.  I especially liked the part on fire and shelter.  I don’t make my livelihood as a survival instructor, but I have discussed wilderness survival priorities with several, and in one case, specifically as it relates to Survival Secrets and Emdin’s “drill.”  While the arguments in the book sound good, they are too rigid for every situation and environment.  One must be able to adapt.

The essence of survival is to be able to sleep comfortably when you need to and to drink enough water to maintain the bodily functions at an optimum level. Outside of life threatening injury, an immediate concern is maintaining a comfortable body temperature. In cold conditions this is accomplished by dressing adequately, knowing how to preserve or maintain the insulative integrity of your clothing and supplementing any inadequacy with fire and shelter.  — Mors Kochanski, Basic Safe Travel and Boreal Survival Handbook from Karamat Wilderness Ways.

For me personally, and as you can see in My Survival Kit, reducing heat loss comes first in cold-weather.  Many would say Shelter, as in the ‘Rules of 3.’  But reducing heat loss is better way to think of the same intent.  That may mean changing your location, such as getting out of the wind or an elevation change, getting off the ground, seeking cover, changing out of wet clothes, and/or adding an environmental layer just to list a few examples.  This is mentioned in similar fashion by Mors when he says “…dressing adequately, knowing how to preserve or maintain the insulative integrity of your clothing…“

At that point, supplement with fire as needed….

NEXT TO KNOWING HOW TO DRESS WELL, FIRE IS ONE OF THE MOST IMPORTANT BUSH SKILLS THERE ARE, BECAUSE IT IS ONE OF THE FEW MEANS AVAILABLE TO MAKE UP MOST GREAT DEFICIENCIES.  — Mors Kochanski

Land of OZ 2013 Fall Gathering
Trees You Should Know…