Since the late 1700’s Hudson’s Bay Company (HBC) has sold fine English-made woolen products in North America.  HBC’s point blankets being the standard by which all wool blankets are measured. 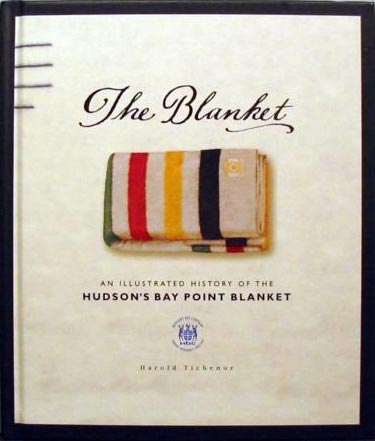 Published in 2002, Harold Tichenor’s book, The Blanket; An Illustrated History of the Hudson’s Bay Point Blanket, chronicled much of its history.  Unfortunately, the book is out of print and used copies on Amazon, etc. are very expensive…

HOWEVER, it looks like Tichenor has his own website of which, if your are interested in the history of “The Blanket,” you can purchase the book directly.  And if you are not interested in the book, the website is still a great resource.

As for the title of this article I was referencing the excerpt below from Tichenor’s book, surely worth a read…

A TESTIMONY TO “OLD FAITHFUL”

Around 1930, The Company placed classified advertisements in a number of newspapers in the Pacific Northwest. They asked readers who had Hudson’s Bay blankets that were over twenty years old to contact them. They received a large number of letters, but perhaps the best was one from a correspondent in British Columbia:

“I have in my possession, one of a pair of blankets which I purchased in your store 30 years ago this month. Used as a saddle blanket during several seasons of riding the range. Was packed thorough to Revelstoke – thence south through the Kootenays on prospecting and hunting trips. Packed north all through the mountains and received some of the roughest usage that any fabric could possibly survive.”

“I could not truthfully estimate how many tons of river gravel was dumped onto it and washed in our attempts to find gold. Was packed back to Alberta and used on freighting trips to Athabasca Landing and Peace River – also the famous Barr Colony (Lloydminster).”

“Used as a saddle blanket for almost two years riding around on hard and tough trips for the C.N.R. engineers. Then used for camping during construction of C.N.R. from Battleford to Edmonton, thence to the mountains.”

“Six or seven Indian babies have been born on it – was used during a trip after wild horses in Northern Alberta when one end got burned in a bad prairie fire, leaving about three-quarters of the blanket intact. Used for three years during my homesteading stint.”

“When I got married, I took my young wife on to the homestead, used the blanket as her covering during the eleven-mile drive. Used it on our bed for years. When the youngster arrived, was used as a mattress in bottom of buggy. When the next one came, was used as a cover on its crib. That winter, was used as part protection over a valuable small stock of potatoes. Next winter used as a drop curtain hung in front of a few pure bred poultry. Then thoroughly washed and placed on the bed.”

“We were out hunting in a car, got stuck in mud and placed the blanket under the back wheel; the wheel spun, then gripped and out we came, leaving a hole in one corner of Old Faithful. Part of it I cut off and sewed up into a pair of heavy socks and used them all winter during a mail trip.”

“We still have the old blanket after thirty years of service, somewhat faded certainly, but like Johnny Walker, still going strong. During all those years the only hole is where the auto wheel ground it. It never frayed, and only during the last few years of very rough usage did it fade.”

One Billet Boil Up!
In Praise Of The Whelen Lean-To by Steven M. Watts