I suppose it is the real demand for bushcraft and survival information that leads to its counterfeit, otherwise the counterfeit would stand a poor show. The growing demand for survival/bushcraft within the past few years has called forth a very large crop of TV Shows, YouTubers, Bloggers, & Books; good, bad, and indifferent — shows putting people in strange situations with other people; shows with naked people; shows with people being alone; videos & posts on gear, skills, lists, and essential lists of skills & gear; and then there are the books… on survival, the apocalypse, bugging-in, bugging-out, bushcraft, and even more bushcraft. There is a long list of them. Some of these books (& videos), a very small number, are valuable contributions to our outdoor literature. Some are written to meet a fancied popular demand. The current is setting that way; these ‘producers’ seem to say to themselves, Let us take advantage of it, and float into public favor and into pecuniary profit with YouTube videos, blog posts, and books. The popular love for drama is also catered to, and the two loves, the love of bushcraft and love of fiction, are sought to be blended into survival entertainment with TV shows such as Man vs Wild, Dual Survival, and virtually any reality show on Discovery Channel and alike. It is Discovery’s shows, more than any of others, that justifies the phrase “Sham Survival,” and it is something to which they have acknowledged themselves.

But before I proceed with this discussion, let me briefly speak of the books that have lately appeared in this field that are real contributions to the literature of subjects of which they treat. ALL of Mr. Mors Kochanski’s study merit the highest praise. Where some books just speak “of” skills, his instruct why and how do so in a safe manner. Tested and matter of fact, they have a rare delicacy of empirical information researched and field tested over decades by a true scholar. Readers are impressed with the copious yet succinct details of information on the most practical of skills an outdoorsman should know.

Mr. David Wescott and Mr. Steve Watts books and articles on primitive skills and the history of Camping in the Golden Age are fresh, original, and stimulating productions of a much needed insight into what it is truly ‘all about’. Practical information is but one benefit to their readers, as they also have the power to vividly paint a picture of context as to how people related in our past, how they relate in the present, and most importantly, how to simply enjoy.

Of all the books on modern survival in recent years, I look upon Mr. Cody Lundin’s as the best; in reading it, one becomes keenly aware of the psychological and physiological danger that is always lurking. Using words and images you can see as literary effects, we can get the information Mr. Lundin is conveying in such a manner we now know how to apply to ourselves.

If you were here with me right now, you would be seeing a sly grin on my face and hearing a little chuckle as I write these words, and this is in fact me — what is above is something I ‘twisted’ from a 1903 article that appeared in The Atlantic Monthly (vol. 91, The Riverside Press; Cambridge).

The original was entitled, “Real and Sham Natural History,” written by naturalist John Burroughs. It started what became known as the Nature Fakers Controversy, a four+ year controversy fought in public through the media including The Atlantic Monthly and New York Times. It even involved President Theodore Roosevelt who weighed in privately and eventually publicly.

Without getting into too much detail about the controversy, which I encourage you to research on your own, it was a literary debate on nature writing; those such as Burroughs whose view on Natural History was ‘more’ scientific versus authors such as Ernest Thompson Seton, William J. Long, and Charles Roberts whose writings, Burroughs claimed, humanized animals through individualistic characteristics they are said to “have observed”… thus leading to robust sales of their writings.

To say the least, this was a very big deal at the time. A Nature Boom was occurring in the country with Outdoor Recreation and Wilderness Protection in full swing. Nature study and Camping were indeed in the forefront as demonstrated by the copious amounts of books and magazine articles on camping and woodcraft from Horace Kephart, E.T. Seton, Daniel Beard, Warren Miller, Edward White and many more.

Perhaps the circa 1920 photograph below will demonstrate its popularity in this era. Pictured (left to right) are Henry Ford, Thomas Edison, John Burroughs, and Harvey Firestone. As Steve Watts pointed out to me, if the public were asked to identify the men at the time, the vast majority would NOT know Edison, Ford or Firestone. They would ALL know John Burroughs, such was the sentiment towards naturalists at the time. 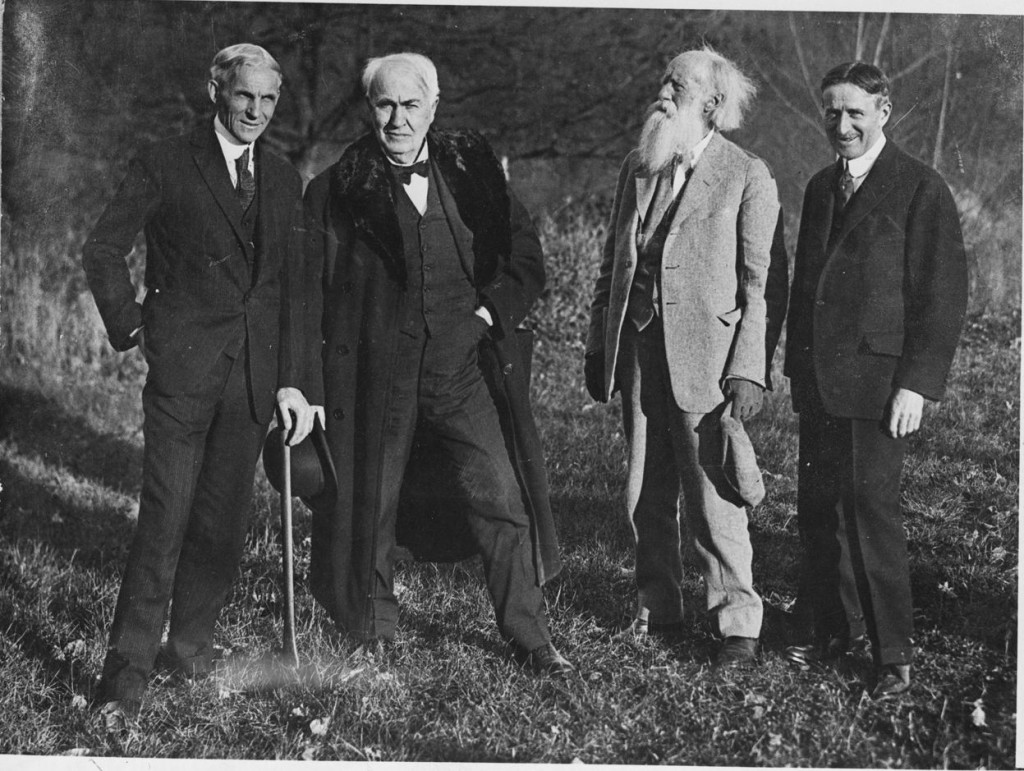 Today, most people don’t know any naturalists, but can easily identify Bill Gates, Mark Zuckerberg, and numerous other business/technology leaders. Is that bad? I believe it is when a generation can easily identify a thousand corporate logos but no more than 5 trees in their own front yard. Such is the status of our society and why I used “Real and Sham Bushcraft/Survival” as a device to point out what we all know…

History tends to repeat itself and there are many trying to screw you out of your hard earned money with the renewed popularity of the Outdoors and Bushcraft/Survival. What’s even worse, these Sham Survivalists are doing it with misinformation, and in one case just recently, our sitting President.

For the love of Christmas cookies, step away from the TV and computer. The TV shows are just some drama produced by city slickers that know far less about the outdoors than you. And all those YouTubers, I have seen very few presenting original information — I would argue (and can prove) many stole the information they are presenting as they seldom offer credit to the original source. What’s particularly sad is not only are they taking someone else’s work and ideas, they are intentionally trying to pass it off as their own, and more times than not, they get some or all of it wrong.

Case in point, just three days ago someone else “took” yet another idea and used it without credit. The idea was a format I came up with to teach Tree Identification on video. I have three YT videos on it, two from four years ago and one from two years ago. The guy used my format without reference, and being an amateur, provided some misinformation. This happens all the time and I am very tempted to start calling some folks out…

Those who have been around awhile can spot the fakers right away. And like I alluded, I can’t tell you how many times my stuff and that of my fellow bloggers have been ripped off by other blogs and especially YouTubers. If you saw it on my site and I referenced someone else (which I do all the time) — at least cite the original reference. And for that matter, why wouldn’t you go to the original reference to begin with, seems only smart to me.

I am unabashedly a Ernest Thompson Seton fan of which I share this for that reason and a lesson. Burroughs and Seton met and made amends; interestingly, the account of their meeting is somewhat a debate, nonetheless, Burroughs recanted much of his criticism of Seton, but the wheels of bad publicity were already in motion and damaged Seton for sometime after. Seton never publicly criticized his teenage idol Burroughs; nor did he criticize Roosevelt, of which TR never recognized Seton as the great naturalist that he was, yet they remained friends.

It was during that time, Seton mostly stayed out of the limelight and instead spent over twenty years compiling pioneering works on north american animals. Like Seton laid the foundation for scouting and woodcraft, he helped lay the foundation for what soon became the sciences of ecology and animal behavior. Ironically, Seton was awarded the Burroughs Medal in 1927.

Seton had his issues, but in the end, his work spoke for itself. If you are publicly sharing information, does YOUR work speak for itself? If it doesn’t, man up, grow a pair and make it right. Don’t be a faker.

12 Responses to Real and Sham Survival/Bushcraft