In the North Georgia school system where my 5th grade son attends, giving oratorical speeches are a regular part of the curriculum within his class. However, when the assigned topic was, “How my optimism will help me press on to greater achievements of the future,” this speech was to be judged for more than the standard grade, it was a competition. First at the class / grade level, then school, county, state and nationally as I understand it.

When Duncan let my wife and I know about the assignment, I had the ideal suggestion in less than a millisecond. As a longtime student of Cody Lundin, I immediately went to one of my bookshelves looking for his second book. While we had to appease the PC gods of the school system by putting a piece of tape over the word ‘Hell’ of When All Hell Breaks Loose; Stuff You Need To Survive When Disaster Strikes, I knew my 10 year-old had a great topic as he toted the book off to school.

What I appreciate so much about Lundin and his teachings, is that they cover more than just the practical application of knowledge. When you get a lesson from him, it covers the psychological, physiological, and applicable physics of the environment. Then, and most importantly, he wraps them all together in a contextual way so you think for yourself.

As are most things in life, including survival, they are 90% mental. So I pointed my son to Chapter 6 of When All Hell Breaks Loose, You ARE what you EAT, and THINK, FEEL, SPEAK, ACT, and FOCUS your ATTENTION UPON, and said read, and look close at the section on “I AM,” even though he and his sister have heard me preach about these words for years.

Duncan’s speech is below. No parental help other than the pointed question to steer him in the right direction, Lundin’s great book, and one other which touched on the mental aspect of survival, Gene Fear’s, Surviving the unexpected Wilderness Emergency. Duncan is a quoting machine for a 10 year old by the way. He became a huge fan of Abraham Lincoln after studying the Civil War this school year, and my side of the family is a shirt-tail relative of Ralph Waldo Emerson, the kid has already read his essay on Self-Reliance. 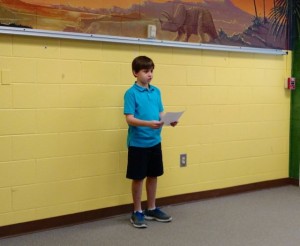 Duncan delivering his speech to the principal and other judges. Perhaps the shorts threw them as it was in the 20’s that day. 😉

How my optimism will help me press on to greater achievements of the future
by Duncan Noble
February 13th, 2015

What if I told you there are two words that can change your life for the better.

The two words I am talking about are “I AM.” The words “I AM” and the words that follow them should be the most important to you. If you say “I am smart” or “I am cool,” you feel good about yourself. No, it might not work the first few dozen times you say I AM in a positive way because there is a good chance that you have said many negative words after saying “I AM.” So if you’ve said a negative thing more than 500 times such as “I AM not capable,” you probably won’t be and it just proves what you say works!

Have you ever heard a sports coach say, “get your head in the game.” That’s because most people believe whatever game you are playing, it is 90% mental. As Ralph Waldo Emerson once said, “A man is what he thinks about all day long.”

I am great. I am grand. I am phenomenal. I am healthy. I am smart. Hey, I feel great. Like I said, it just proves that this stuff works. Having a positive attitude will help me lead to greater achievements of the future! This positive attitude will affect me in many aspects of my life, such as school, when I get a job, when I am with my friends, and even spiritually.

It’s all about what you say after the words, “I AM.” So like I said before, try to put something positive behind them, not negative. Abe Lincoln once said, “folks are usually about as happy as they make their minds up to be.” I like this quote because it says you have the choice to be happy which is like “I AM,” you have the choice to say something positive. “As a man thinks in his heart, so is he” the Bible says in Proverbs 23:7.

I hope you really think about saying positive things, not negative. It’s common sense, why put yourself down. Life is short, why waste it.

You might say, I don’t get it, so let me explain it again. The moment you say “I AM” you have the choice to say something negative or say something positive. When you say things like ‘awesome’ or ‘pretty’ you feel great.

Using “I AM” with positive words about myself will help me reach greater achievements. I hope you do the same with those words too, as no one else can say them for you. Only YOU can say the words “I AM” for yourself.

Duncan was one of a hand full of students to make it to the school level competition. While I can’t imagine a better topic for him or a much better message for people to hear, content is only worth 35% of the judging. Unfortunately, he didn’t make it to the county level, I can only guess is that he did not talk enough about himself specifically, as his delivery was very good (obviously I am biased).  Nonetheless I AM very proud of him.

From Cody Lundin’s, When All Hell Breaks Loose

The Creative Power of the Words “I AM”

“I AM is the creative word; the initial word that provided creation and from which all creation springs.” — A.D.K. Luk

The two most power words in the English language are the words “I AM.” The use of the words “I AM” denote individualized being. Upon using these two words, you decree into your world anything that comes after them, whether positive or negative. When used, they draw forth and release more energy into your world to perform the act or thing you desire. Their power of creation happens regardless of your conscious use of the words. They don’t even need to be physically spoken; thinking or feeling the words “I AM” will also have an effect in your life.

Think about these two words for a moment. Within them is the proof that no one outside of yourself has any power over your life. Absolutely no one else can say the words “I AM” for you. Only you can say those words to define what you want to enter into your life. When you use “I” or a form of it such as “me,” “myself,” “my,” or “mine,” never use a negative word or statement after it. When you become aware of the creative power of these words, you will notice throughout the day how many times you and your loved ones think or say negative things after them. After the words “I AM” come the habitual, unconsious phrases such as “not good enough,” “not rich enough,” “not pretty enough,” “not healthy enough,” or whatever. Notice how people will affirm their misery, lack, and sickness with use of the two creative words. And, because the power of manifestation within them acts regardless, they get what they ask for: more misery, more lack, more sickness, and more painful experiences in life. Why? It doesn’t take any more effort to say positive things after the words “I AM” than it does to say negative things. Even if you don’t believe what you say at first, because you have temporarily accepted your feelings that physical appearance world rules your life, fake it until you make it. I AM perfect health. I AM rich, filled with abundance and supply. I AM the success I wish to be. I AM perfect harmony and fearlessness.

Once you change the subtle habits of decreeing negative things into your experience by your thoughts, feelings, and conversations, you will begin to see a positive change in your life. You might whine at first nothing is happening, that no change is taking place, that this was all a bunch of BS. After having said “I AM stressed” thousands of times, how can you expect things to shift after saying “I AM perfect relaxation and harmony” a few dozen times? If your life seems to be crap and you specialize in affirming how crappy it is, you’ve already proven that this stuff works! Like everything else in the world, you get out of it what you put into it. Even if you’re enjoying the low self-esteem for whatever reason, and couldn’t possibly affirm anything positive about your pathetic life, at the very least STOP thinking and saying negative I AM statements! Soon, when some of the negativity has been neutralized from your not giving it so much power, you will gather the strength and courage to actively make positive “I AM” statements. Eventually the habit will grow, and affirming positive things in your life will become a part of your everyday conversations, both externally with others and inside your head.

Knowing that by using words “I AM” you force into your physical life what-ever statements you put behind it, why would you say anything negative after these words? People’s habits are powerful, and most of the world has strong, oftentimes subconscious habits about thinking they’re wormlike losers. Many of us have that soft spot that loves to be self-pitied and affirm how shitty things seem to be in our lives. Habit is accumulated energy that has been charged with a certain desire. Get over it and stop being a victim of circumstances that you have created in your life. Gently but with great firmness and determination, demand that positive habits replace unproductive ones. Don’t fight the negative habit and give it any power than it already has. Simply focus your attention on what you would rather have, hold it there with unwavering conviction, and support its certain manifestation with positive “I AM” statements. Negative habits will dissolve when they are no longer being fed by your powers of attention, thought, feeling, spoken word, and action. Thus, change your habits and you will change your life.