When the realization set in to all the things punkwood offers with fire, and how available it is in the woods, I did the quintessential face-palm. This also happens frequently when I read the classics from Kephart, Jaegar, Beard, Seton, et. al. and see those simple and cool solutions that I didn’t take advantage of in my earlier woods-loafing days. It just seems those guys were ate-up with tremendous knowledge…

As a reader of MW, you already know the majority of wilderness living skills and woodcraft tricks have been done before. It’s the rediscovering and putting them into context that makes it so much fun. Not to mention being flat out useful in some situations!

And speaking of useful, that is what punkwood is in a couple different ways. But before we get into those uses, both past and present, let’s discuss what exactly is punkwood. Anyone can describe wood that is rotten as being punky wood. But not all rotten wood will be of use to us in woodcraft.

Punkwood is the wood from any tree that is in a stage of decay where it feels almost styrofoam-like in consistency… very light and slightly squishy. It is not so decayed that if you squeeze it between your fingers it crumbles to dust. But it is also somewhat softened from decomposing in that it is too soft and light to be used as normal wood. As such, when dry, it readily smolders when significant heat is applied. To find, simply start picking up decayed wood and experimenting based on the provided description.

Dating back to the 1700 and 1800’s, punkwood was considered tinder. When you see references in those older text to punk, spunkwood, touchwood, or spunge, they were talking about punkwood (or other tinder such as chaga). That’s why they carried airtight tinder boxes (see video at end). What we call tinder today (grass, shredded tree bark, etc.), they called kindling.

Fire making is a simple process with the mountaineers. Their bullet pouches always contain flint and steel, and sundry pieces of punk (a pithy substance found in dead pine trees) or tinder; and pulling a handful of dry grass, which they screw into a nest, they place the lighted punk in this and closing the grass over it, wave it in the air, when it soon ignites, and readily kindles the dry sticks forming the foundation of a fire.

Interestingly, cloth of natural fibers was also charred directly in flames, then extinguished in an airtight tinderbox in those earlier times. What folks do today when making charred-cloth is likely a modern idea, invented by some clever Mountain Man reenactors at a Rendezvous in the 1960s. If you have any references from the 1830’s or earlier of them putting cloth in a tin and putting that tin directly on heat, I and others would like to see it please. 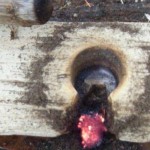 Coal Extender – This was really my first introduction to using punkwood. I was learning primitive living skills back in the 90’s and this was all the rage (ok, not really). Anyway, in cases where you want to increase your odds of making fire, punkwood could be used to “extend” the life of the coal you generated in a friction fire. Simply take a dry piece touching it to your coal to create an ember. At this point you could drop your coal into your tinder bundle and if for some reason it did not light, you still had the punkwood ember available to try again.

Flint & Steel Firelighting – With modern firesteels (ferrocerium rod, metal-match, misch-metal, etc.) composed of materials that throw white-hot sparks thousands of degrees in temperature, it is rather easy to light most natural materials if prepared properly, including punkwood. There are very few natural occurring materials that will take the weak orange spark from the flint & steel method. Most materials need to be charred. One of the more readily available materials in the world that can be charred to do this is punkwood. As you will see in the video, I use an airtight tinder box to extinguish the punkwood after charring. You can also bury the smoldering punkwood in the ashes from your fire or loose dirt to extinguish. The beautiful thing about this solution is you will never run out of a way to make fire as long as you have a piece of high carbon steel (stainless and some of the tool steels like A2 and D2 won’t work). By the way, you can use the back of your high-carbon steel knife too (next article at MW). 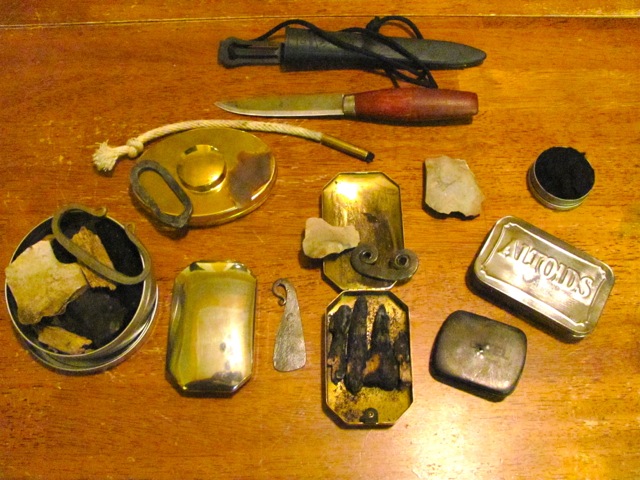 Some of the author’s Flint and Steel Kits.

Insect Repellent – a smoky fire is a good way to keep the bugs at bay. But sometimes, we don’t need or want to go to the trouble of making a fire. Lighting a piece or pieces of punkwood upwind from your location is a great natural alternative. Here are some other Natural Insect Repellents too.

If you liked this article, you will also like our article on FATWOOD.