“The first camp I ever made was built exactly after the ‘Nessmuk’ pattern, shanty-tent, camp-fire with butternut back-logs, and all.  My only implement besides knives, was a double-bitted hatchet just like his, of surgical instrument steel, only eighteen ounces.  I was alone.  I stayed in that camp five weeks in October and November; and I was snug and happy all the time.”

“Among my most valued possessions is a tiny Colclesser tomahawk, of 8-ounce head and 2 1/2 inch bit, which, with hickory handle and home-made sheath, weighs only three-quarters of a pound.  I seldom go anywhere in the woods (unless in marching order with a heavier axe) without this little trick.  It is all that is needed to put up a satisfactory shelter wherever there is hemlock or balsam, or bark that will peel, while for other service I use it oftener than I do my jackknife.” 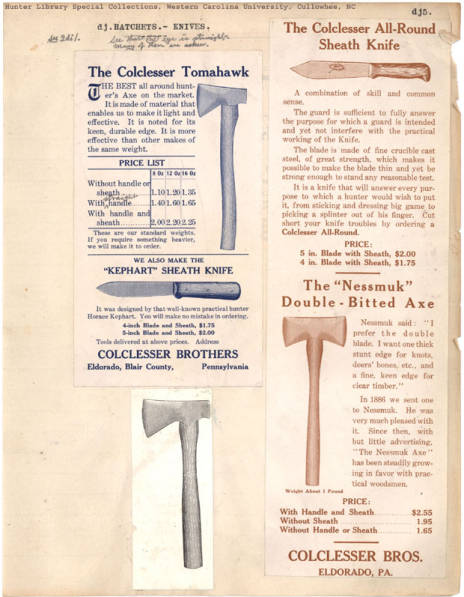 Kephart was very fond of the tools created by Colclesser Brothers of Eldorado, PA.  The now-famous “Kephart knife” was manufactured and sold by them, and he was a great fan of their “Tomahawk” axe (see above).  I can imagine that his fascination with the American frontier drew him to both the form and the “tomahawk” name.  The axe is featured in the Colclesser ad found in Kephart’s papers after his death.  Note that it came with either a slightly curved or a straight handle.  It was offered “without handle or sheath,” “with handle” or “with handle and sheath.”  It seems that when contemplating his order, Kephart chose the second option.  In his own hand he has written “straight” as his handle shape of choice.  We know that he made his own sheath.  It’s possible that the “Nessmuk” hatchet he used in that “first camp” was a Colclesser as well (illustrated here in the same ad).  SMW, ’14

Kephart’s affinity for straight handles can be seen in reference to his other hatchets… and to axes in general (underline added for emphasis):

“A woodsman should carry a hatchet, and he should be as critical in selecting it as in buying a gun.  The notion that a heavy hunting knife can do the work of a hatchet is a delusion.  When it comes to cleaving carcasses, chopping kindling, blazing thick-barked trees, driving tent pegs or trap stakes, and keeping up a bivouac fire, the knife never was made that will compare with a good tomahawk.  The common hatchets of the hardware stores are unfit for a woodsman’s use.  They have broad blades with beveled edge, and they are generally made of poor, brittle stuff.  A camper’s hatchet should have the edge and temper of a good axe.  It must be light enough to carry in or one’s knapsack, yet it should bite deep in timber.

The best hatchet I have used (and it has been with me in the mountains for seven or eight years) is one shown in Fig. 103, except that the handle is a straight one, 17-inch, that I made myself.  Its weight with leather sheath is 1lb. 10 oz.  With this keen little tool, I have cut many a cord of the hardest woods – hickory, oak, dogwood, beech, etc. — up to young trees eight or more inches thick, often laying in a winter night’s wood with it.”

“In making a new axe-helve, do not bother to make a crooked one like the store pattern.  Thousands of expert axe men use, from preference, straight handles in their axes.”