By Brandon Jacobs on October 20, 2013 in Nature & Conservation, Wilderness Survival

Trapping has a long history in this nation. It was not only a way of life for most; it was also a necessity in terms of procuring meat to make it through long journeys. It is safe to say that for most people nowadays trapping is only something heard about and most don’t really understand what it is about. For me, trapping is a yearly hobby, but for George Michaud it is his way of life. 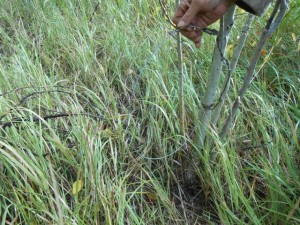 The snare is set on a well-established trail that the targeted animal uses regularly. Care is taken not to set foot on the trail itself. Walking on trails that one intends to set up a trap can warn the animal of your presence through scent or just simply disrupting the path.

Trapping in the Teton Mountains is much different than trapping the great plains of Kansas but there are things that remain the same no matter where one traps. George describes some of the key points in trapping; looking for signs, scent control, determining the right trap and set up for the target animal, and keeping things simple. “An animal would need a master’s degree to figure out how to get caught on some of the traps that are shown in various websites and books,” said George. Keep your traps simple but keep them effective as well. Although he sets many types of traps, he relies on snares to do much of the work. They are light, simple and very effective. George shows one of his snare sets (inset picture).

Most trappers currently utilize modern traps but some will also use primitive traps, where legal. Both have their advantages and disadvantages.  Modern traps have the advantages of being stronger and more durable than their older counterparts but primitive traps can be made anywhere and made out of almost anything on site. Primitive traps also blend in well because they are made from the same materials that the animals see every day.

Know the habits and ways of your target animal. It’s important to know what type of foods that animals eats during each season. Knowing its gait will help you position the trap accordingly from the bait or attractant. Know where the animal hunts for food and what its daily routes and routines are.

Look at transitional areas where two types of habitats meet for signs of activity. Tree lines, field edges, and water ways are all good places to start. 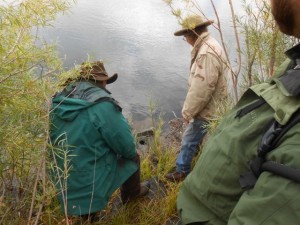 George scanning the water’s edge for signs of activity. No matter how good your set is, you’ll never catch anything if there are no animals in the area you are trapping.

Knowing the animals you are trapping will increase your success rate. Some animals are fairly easy to catch, such as opossums and rabbits. Others can be very difficult without having a very intimate knowledge of the animal itself, like coyote. George explains that each animal can be placed on a simple five point chart in terms of how hard they are to catch. Imagining that your five fingers represent the five key animals, they are as follows: Coyote, Fox, Otter, Mink, and Beaver. These are represented from the hardest to the easiest respectively. All other animals fall in the spectrum between these somewhere.

Trapping, like most things takes time to master but all it takes is a little ambition to get out and start doing it. Get out and learn the animals you are trapping, learn the environment in which you will be trapping, and learn what sets works best for you. Experience is the best teacher, although George is pretty good too!

A special thanks to George again for taking the time to pass along the knowledge.

One Response to Trapping with George Michaud