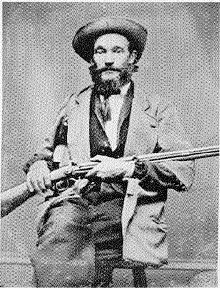 “The pilgrim’s passion drives him to extremes—spending time and treasure in pursuit of sacred sites, holy shrines and points of power. The zealot’s dream may lead him through the snow, along steep yak trails to a hermit’s cave (high in the Himalayas)…or far upstream by dugout canoe on a remote black water river to a shaman’s hut (hidden deep in the rain forest gloom)…or to the ruins of an ancient temple scattered along the sun-baked rocky hills of the Mediterranean coast (the last refuge of a long-forgotten god).

My pilgrimage (less grand, but no less potent) had brought me to a camp in the backyard of an old man in Wellsboro, Pennsylvania. G.W. Sears was ailing once again, and the word had been passed along the backtrail that this might be his last spring among the living. So, I was here in Nessmuk’s yard, a few feet from his back door, where the family had helped him set up the old shanty tent one last time. Everyone knew that these would be his final campfires.

I liked him right off. He looked like an ancient spirit of the woods, with a twisted up beard and a scent of hemlock about him. He played camping with the grandchildren, told stories of the Michigan backcountry, and recited his own poetry (taking odd pauses here and there to catch his failing breath). At night, he fondled his old camp gear with the tender caresses of a lover. He wrote something in the front leaf of my stained and tattered copy of Woodcraft. It was unintelligible, like a tangle of vines along a river bank. We took dream trips across Adirondack lakes, paddling the conjured-up memories of his fairy-sized canoes. We shot birds on the wing by the score, as they flew across our imaginations. He was sometimes cranky and sometimes sublime. At times he made me feel like an old camp chum, at other times like a bumbling intruder. I like to think that my visit gave the family a bit of a break, but after three days I knew it was time for me to drift on.

I left him by the fire, oiling his old gun. I looked back one last time. His face seemed to be disappearing into the smoke. And, I swear…I think he winked at me.”   Gypsy Jack, April 1890

“Got word yesterday that Nessmuk died at home last month. They buried him in a grove of trees in front of his house. Good camping, old pard…wherever you are.”   Gypsy Jack, Walden Pond, June 1890