Battle of the Stoves

By Charles Winchester on April 8, 2016 in Firecraft, Food, Master Woodsman

In my opinion, there is nothing better than cooking outside in the backcountry. Nothing goes better with a good cup of coffee, sitting next to a flowing creek, listening to the sound of nature, and soaking in the majesty that is God’s country than a meal cooked afield. Cooking afield always tastes better no matter what is on the menu.

I have spent decades dialing in my cooking kits for different outings. What I bring canoeing is different from woods bumming, to hiking, and jeep camping- well don’t get me started. Through the years I have tried every kind of stove imaginable. A few years ago I found one stove, the folding Fire Box G2 Nano, that seems to always make my kit and travels with me daily. Due to the size and versatility of this stove it crosses over in all my adventures.

I have recently reviewed the Solo Stove and had many questions about the Solo. I found myself comparing the Solo to my Nano, I decided that I would let you guys in on my testing and thoughts on these two stoves. So without further adieu… 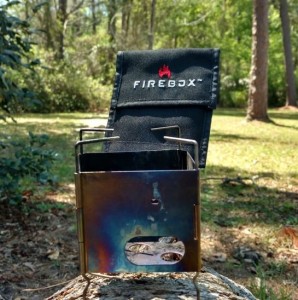 In the right corner weighing in at 6 oz, height 4.75 inches, width 3.0 inches, and folded a whopping .25 inches. The cost is $39.99 made from stainless steel made in the USA. Is the Fire Box G2 Folding Nano. I have the Titanium Folding Nano that cost $69.99 and weighs 4 ounces. Solo Stoves doesn’t offer a Titanium version. 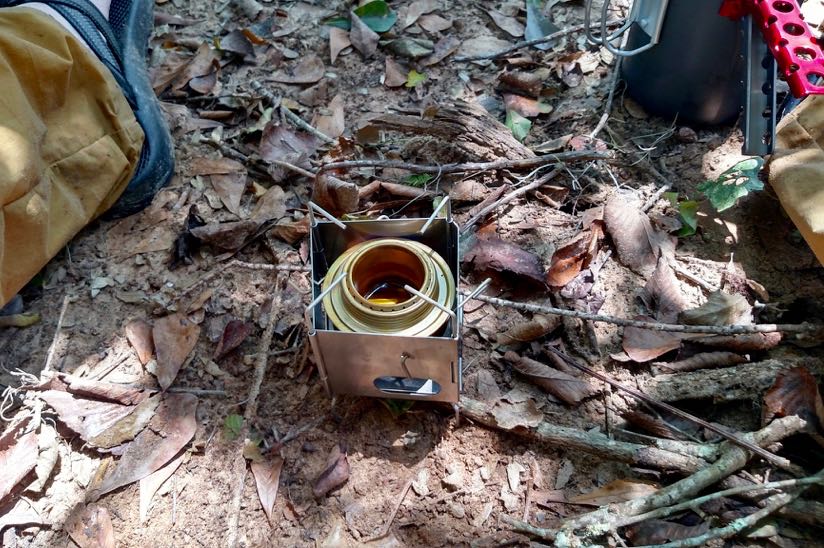 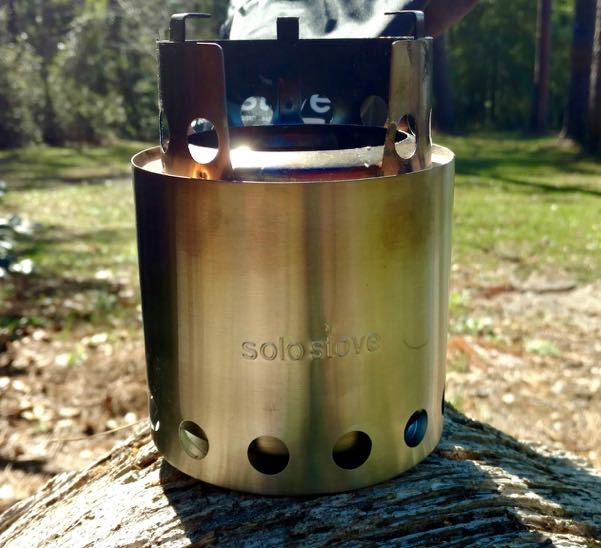 Are you ready to rummmmble?????

I wanted a good clean fight so we covered the rules:

It was a beautiful sunny day. The temperature was 72 with humidity at 53%. The wind speed was 0 mph, Barometer was 30.10 in/ Dew Point 54% with visibility was 10.0 miles. Just a great day to see a fight with awesome ring side seats!

I would use the same wood: 1.5 pounds of downed Pecan limb broken into twigs.

The prep for each stove was the same; 3 minutes of processing the wood into usable wood fuel. Both these stoves make it very easy to for wood collection and prep in not having to build the fire on the ground thus going no trace. Using downed material is a great time benefactor as you hike you can quickly gather needed materials… 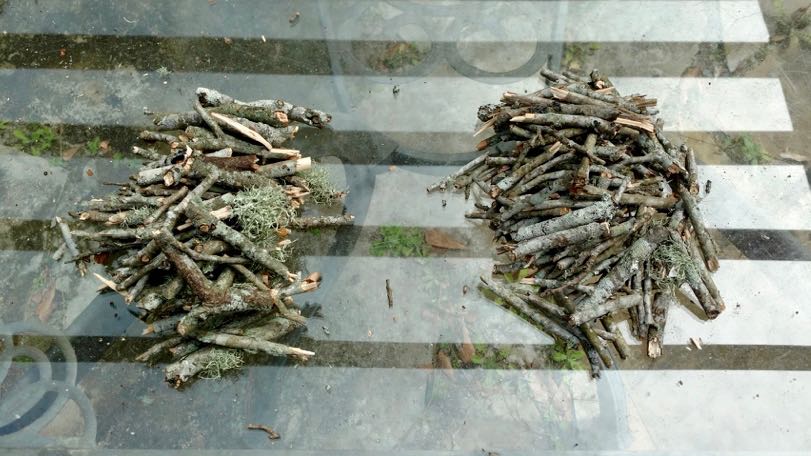 Next I selected two 5 cup hard anodized aluminum Mors Pots. Below are the two stoves, fuel, and pots ready to begin the test. 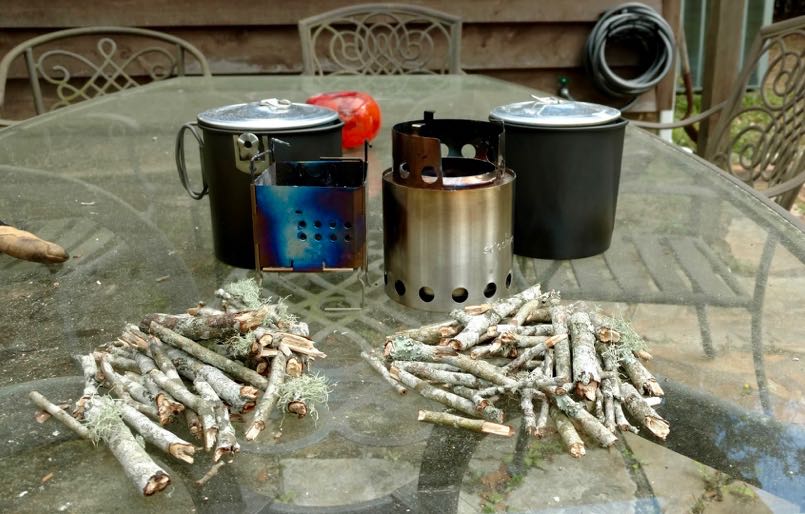 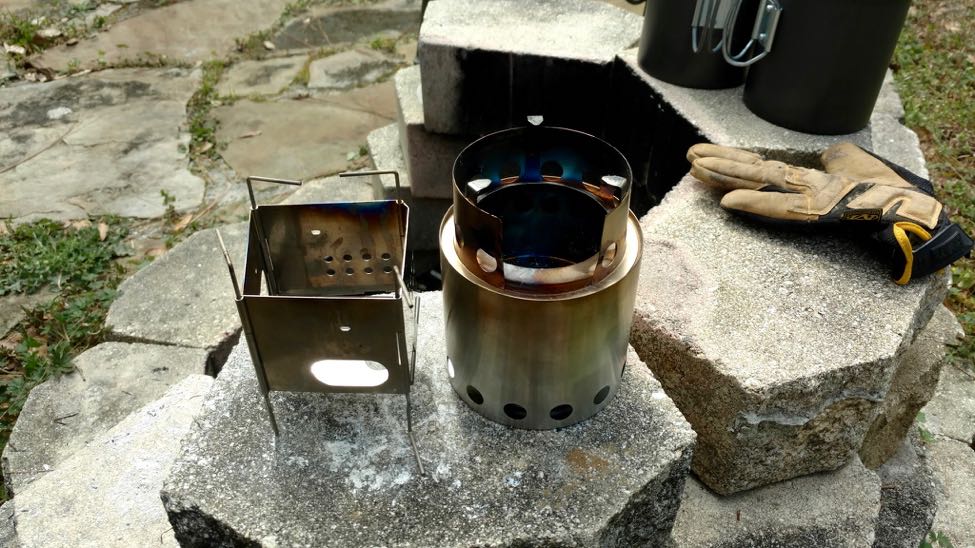 So let the rumble begin. First I needed to load the stove. The Nano I loaded with the kindling on the bottom, added the pencil lead size, and followed by thumb size on the top. The Solo was done in the exact opposite with an upside down firelay. Once both were loaded I lit them, the Nano I just picked up and lit from the bottom and it fired right up. The Solo I lit from the top and I had to feed some more kindling to the stove before the fuel lit. 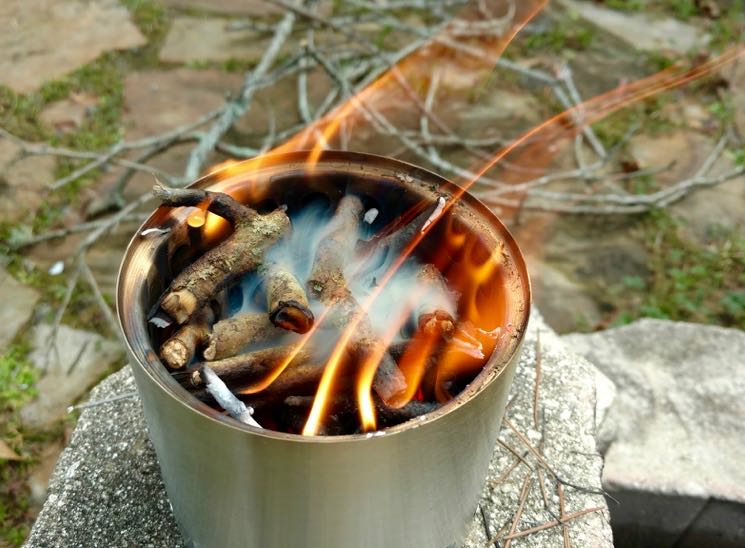 The Solo (above) took 4 minutes 16 seconds to begin the gasification process. Once that had begun I could add the pot. 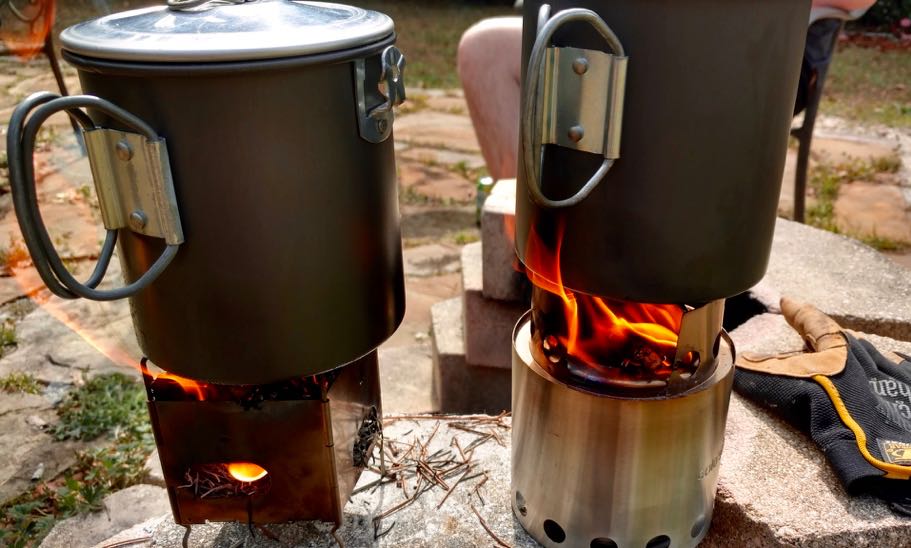 The Nano (above left) immediately began burning and I was able to place the pot on the stand to begin heating the water.

As the two were burning I could feed the Nano from the bottom two offset holes or from the top all four sides. I could use any size twigs without concern in hindering the heat. The Solo can only be fed through the top into the one opening on the stand. I had to use very small twigs and I learned that you have to be careful of the amount of fuel placed into the Solo because more fuel reduces the gasification process and reduces the heat. 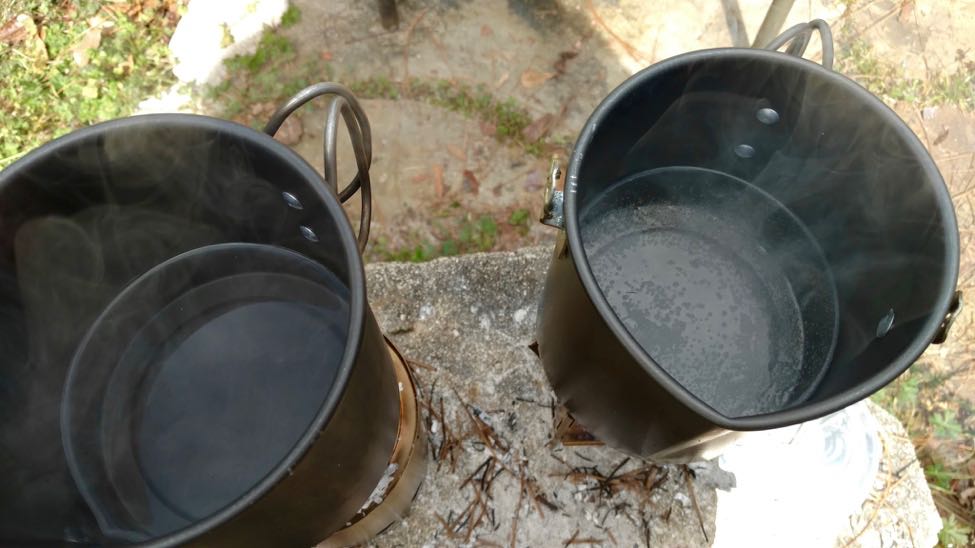 So next was the cool down time of the two stoves, after all was done with cooking, time to get back on the trail. The Nano’s cool down time was quick enough to pack in 2 minutes and 58 seconds. I also noticed the leftover fuel in both the stoves was different. The Solo took 8 minutes and 4 seconds.

Looking at the burn efficiency of the two stoves is also important (see below). On the left are the remnants from the Nano, on the right from the Solo Stove. 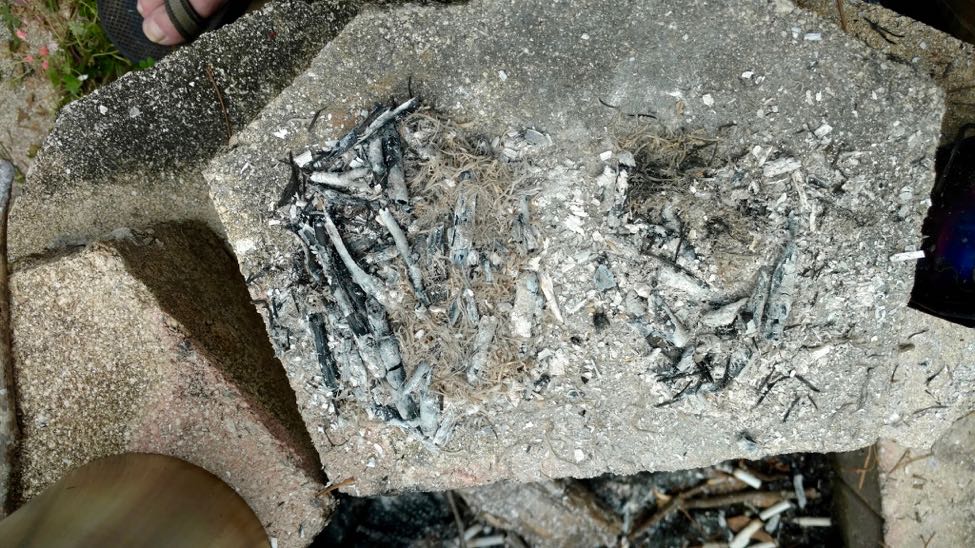 The last thing I noticed was the amount of wood left over from the initial 24 ounces. The Nano burned half of the wood at 12 ounces, the Solo burned 14 ounces leaving 10 ounces on the table.

The last thing I tested was the packability. Side by side inside a 5 cup Mors Pot. Last one the two stoves stacked on top of one another. 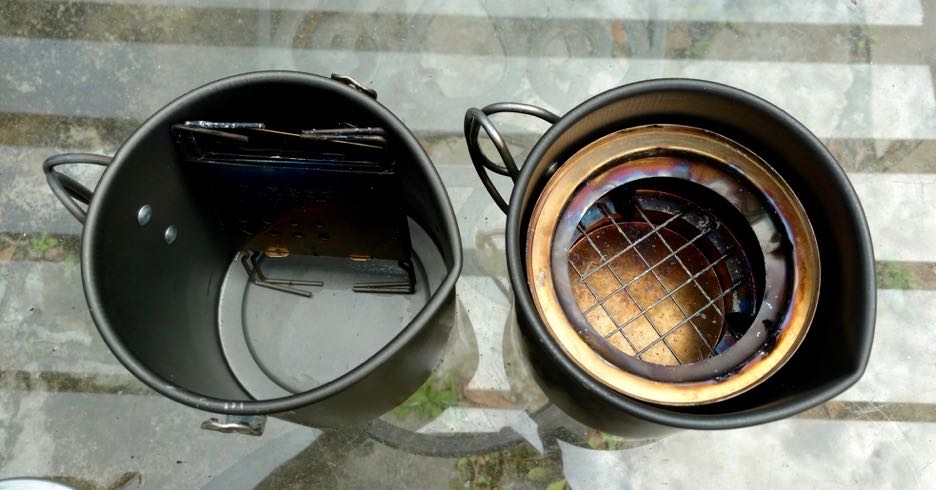 So was it a knock out??? I will let you be the judge. All I will say is that the Nano G2 Fire Box is what is still in my kit. I will say the Solo Stove 900ml pot is what the Nano sits in. But that is another story, which will be told. Look for it soon.
Whether you pick one of these or another type of stove, all that really matters is that you GET OUT THERE!!! 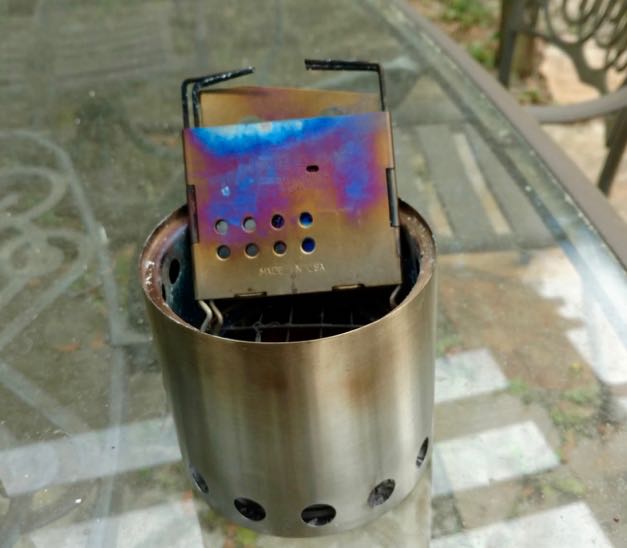 Chuck Winchester holds a Bachelor of Science in Criminal Justice and Masters in Emergency Management. A Certified Emergency Management Coordinator, he is also a Wilderness EMT and Certified American Heart Association instructor in First Aid, CPR, and AED. As a retired Law Enforcement Officer he has been POST certified in Use of Force and Firearms Instruction. Since the early 90’s, he has been involved in the Boys Scouts of America as a Cubmaster, Scoutmaster, Troop Master, Area Council Event Coordinator, Area Council Trainer and an instructor for BSA in outdoor living skills. A master of outdoor cuisine, Chuck has successfully been catering for over 15 years and is certified in safe food handling by the State of Georgia. Blessed to be married to his soul mate, he has enjoyed raising his five kids and sharing his knowledge with them and others.
View all posts by Charles Winchester →

Between The Rivers Gathering; May 30th – June 4th
Battle of Stoves Follow-up on Firebox Nano

10 Responses to Battle of the Stoves