By Master Woodsman on April 20, 2015 in Books, Fieldcraft, Woodcraft

Parachute him in the wilderness and he’ll be cooking by the end of the day, without a pot, pan, or matches. While most all modern cooking contraptions are made of metal, remember: primitive man had nothing but stone, bone, and wood. And like primitive man, Watts uses the forest as his kitchen hardware store.

For the movie Cast Away with Tom Hanks, Watts was the guy who came up with the idea for the coconut canteen, the ice-skate axe, the videotape rope, and even Wilson, the volleyball with a face.

“I guess it was my twenty seconds of fame,” says Watts, who was a technical consultant for the movie. “It was a matter of survival, and what it comes down to is a reliance on primitive technologies.”

Watts has a master’s degree divinity from Duke University; he is the author of Practicing Primitive: A Handbook of Aboriginal Skills and has been director of Aboriginal Studies at the Schiele Museum of Natural History in Gastonia, North Carolina, since 1984. Clearly, he has delved deeply into how primitive man lived, survived, and even ate. He credits his early interest in the primitive days with Boy Scout Troop 5 in Cherryville, North Carolina, which was led by his dad, Olin S. Watts.

“He made it interesting. In the woods, he thought like a kid,” Watts said with a laugh one winter morning, while he watched him tending a hobo fire. “In the woods, you can get a kid’s attention with food. Tarzan steaks cooked on hot rocks — what kid would not love that?”

He also has an interest in what is known as woodcraft and the golden age of camping in America, 1890 – 1920. The founding fathers of this movement were men like Daniel Carter Beard and Ernest Thompson Seton, who helped organize the Boy Scouts of America. The art was also practiced and perfected on a daily basis by the hobos of the Depression era, who camped practically every night in the woods. They cooked and ate using what they could find — tin cans and pocketknife forks.

Watts has written about these primitive contraption cookers: “(Hobos) knew the smell of wood smoke and the taste of honest grub cooked over the flames and embers of mankind’s oldest friend — the campfire. They possessed the skill to fashion cooking tools and gizmos from the woods and the tin-can castoffs of the early-twentieth century America. Their focus was on skill and the cooking and eating of traditional camp life – not some freeze-dried concoction boiled up on a $200 five-ounce stove.”

Watts acknowledges that this style of camping “left lots of footprints” in the woods, but he argues that these woodsmen experienced a direct relationship with the natural resources that were available to them. And they did so, he writes, without the “highly efficient technological wonders of the twenty-first century” (much of which are made from nonrenewable resources).

Next to the crackling oak fire, Watts sat on his haunches and turned a split-bamboo spit of salmon to the color of a fire-broiled orange. When it was done, he broke off a moist, charred chunk and handed it to us piping hot.

Fillet of Salmon on a Split Stick
Serves 1

THIS RECIPE REPRESENTS the essence of what Watts has learned about how primitive humans cooked. He developed it by studying the tools that were available at the time, then improvised until he landed on a workable primitive cooking rig. “They were ingenious because they had to be, in order to survive,” he told us as he fashioned a miniature grill of bent limbs to support a fillet of fish. This recipe’s secret is that there is nothing to get in the way of flavor of the grilled fish. Besides a slab of salmon, everything he needed, from tools to heat, he found in the woods.

Watts laughed when asked about the meat’s smoky flavor. “Primitive man wasn’t concerned about inserting gourmet wood smoke onto his meat; the smoke was just a by-product of cooking over an open fire.”

The smoke on this fish may have been unintentional, but it still resonated through every morsel.

Build a hardwood fire and let the flames die down to a good bed of coals.

Find a straight 5-foot-long limb of nonresinous wood such as bamboo or oak, about 1 1/2 inches in diameter. Using a sharp knife, skin the bark off of about 1 foot of one end. Using the knife and a mallet or fist-sized stone, carefully split the limb into quarters for about 15 inches, starting at the skinned end.

From thin branches nonresinous wood, cut 3 or 4 skewers about 6 inches long. Run the skewers in and out the width of the fish. Slide the fillet length-wise into the split in the limb. Tie the loose ends of the split stick together gently with string to hold the fish secure, soaking the string first so it won’t catch on fire. (Watts is a stickler for authenticity; he used thin, green vines gathered from the woods, but he says it’s acceptable to substitute kitchen string).

Find a sturdy forked stick and drive it into the ground next to the fire so that the crook of the fork is 8 to 10 inches about the coals. Place the tied-off end of the cooking stick in the V of the fork. Hold the spit so the fish is horizontal over the hot coals. Cook, rotating a few turns, until the fish is crisp, nicely charred, and nearly opaque throughout, about 4 to 5 minutes per side.

Season with salt and pepper and squeeze lime juice over it. Untie the fish and eat it right off the stick.

Dan “The Pig Man” Huntley, author of Extreme Barbecue, also owns and operates Outdoor Feasts, a very successful catering business in York, South Carolina. This article was reprinted with his permission. Thanks Dan!

Not the above recipes, nonetheless, a few pictures of Watts cooking an Imu (Polynesian Earth Oven) and using a primitive grill below. Interested in learning more about primitive cooking? Track down the out of print book Jack-Knife Cookery by James Austin Wilder. 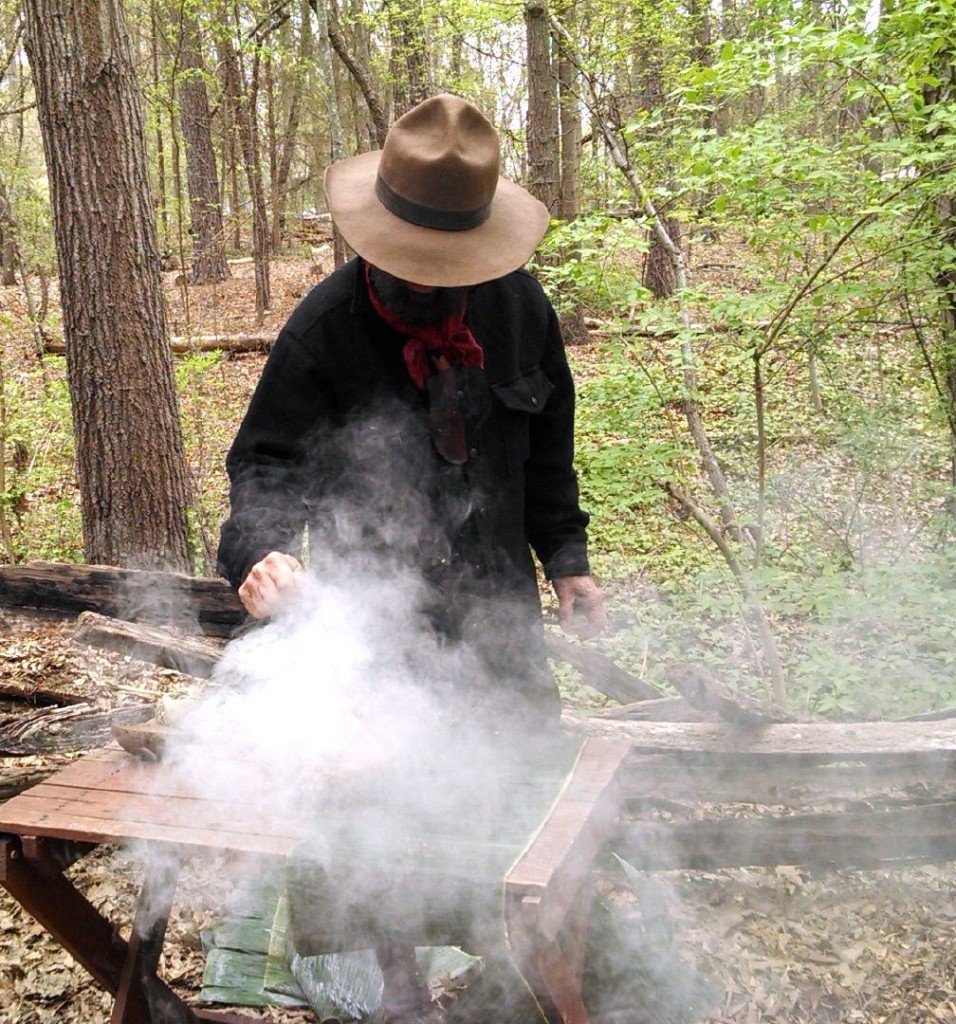 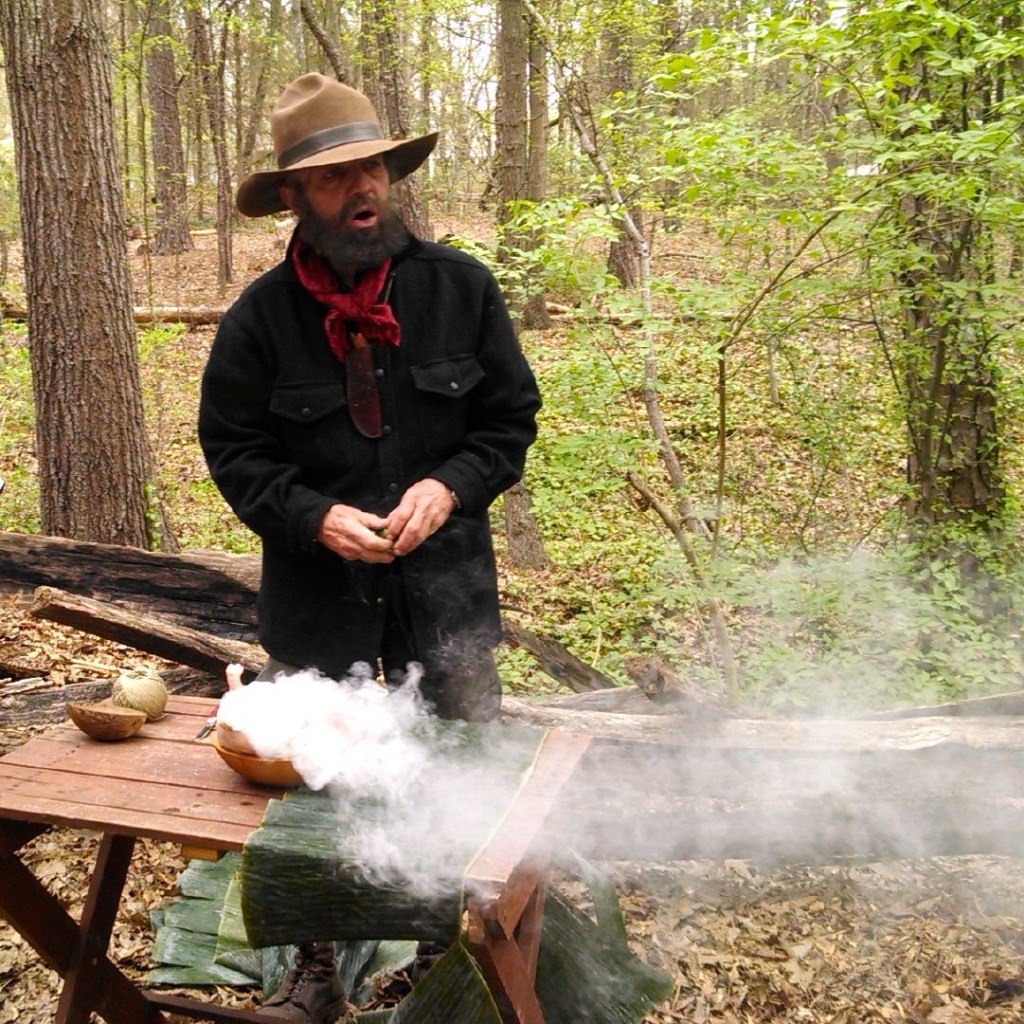 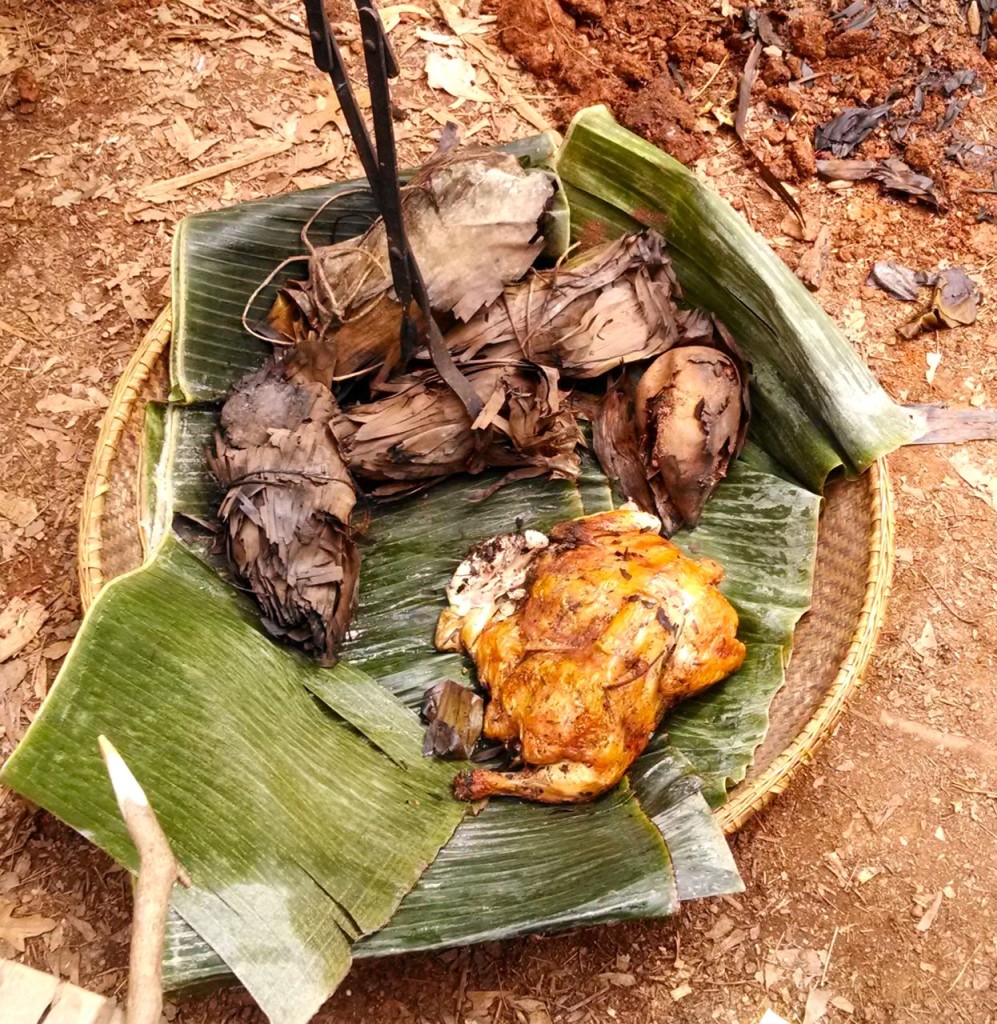 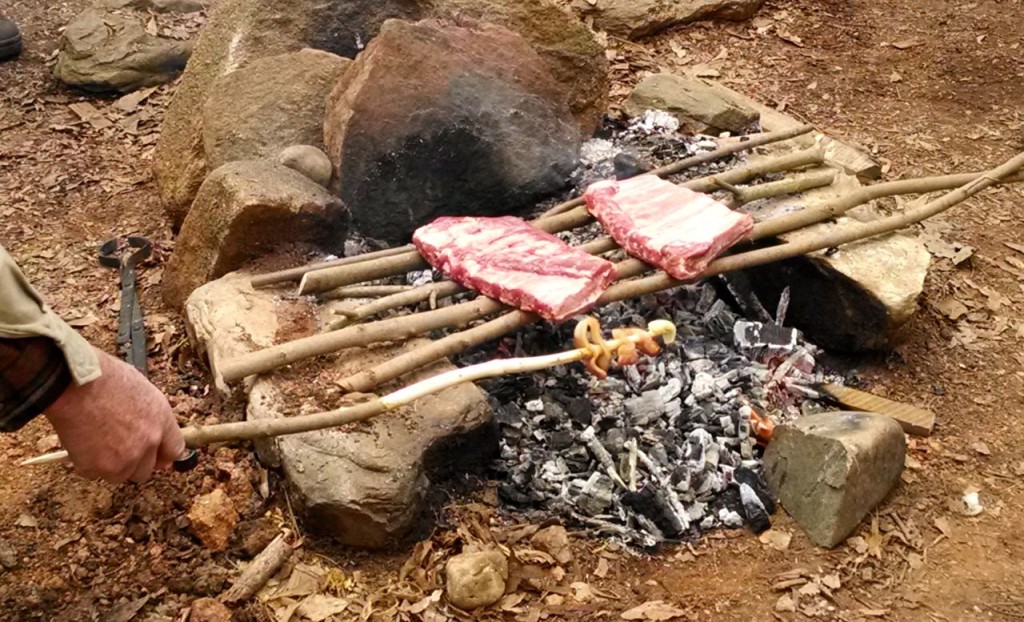 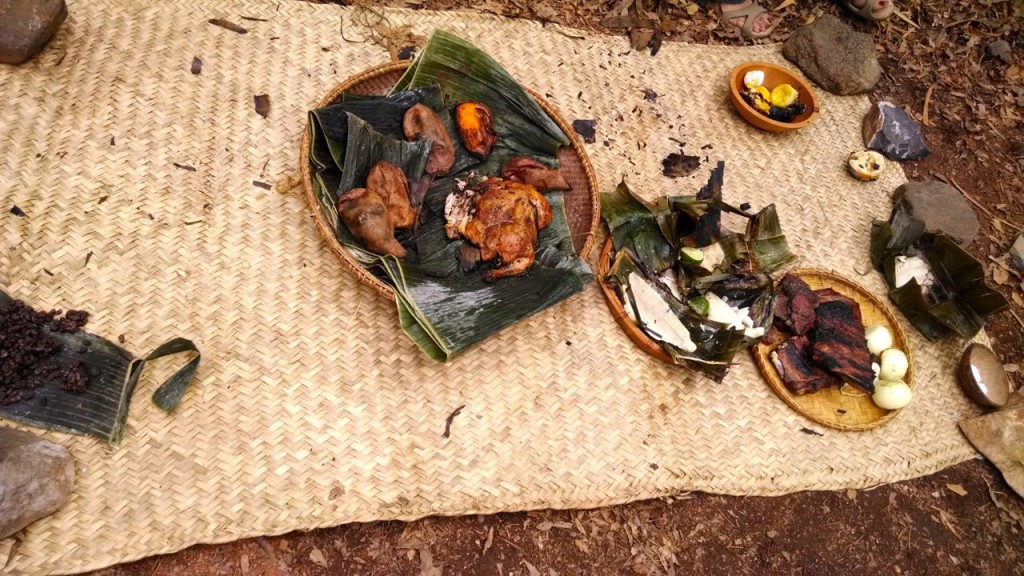 Horace Kephart Days – May 15th and 16th (and a special book update!)
Woodsmoke, Camping in the Old Style, and other important updates…