Balloons & Bindles… on the road with…

“They were road kids, and with every word they uttered the lure of The Road laid hold of me more imperiously…And it all spelled Adventure.” – Jack London

“The Civil War had turned thousands of boys into disciplined foragers, resilient, hardened, able to find food and shelter in all conditions, proficient in the use of the railroad. After the war, many of these men, uprooted and inured to years of wandering and fighting for survival, found peace an unsettled time. Few jobs awaited. Now, with the days of troop movements and army camp life and dodging hostile forces behind, many continued their wandering—picking up odd jobs, sleeping outdoors under any available cover, begging meals, a new kind of adventure for which they were well trained. They followed wagon roads and trails. But mostly they hit the tracks.”
– Roger A. Bruns, Knights of the Road, 1980

These men, and a few women, wandered the country working in mines, logging camps, and shipyards. They worked for the farms, the railroads and the road crews. Some of them wandered to Texas joined the great cattle drives and became the mythic American cowboy—“hobos-on-horseback.” Hobos literally built the new America of the late-19th/early 20th century.

The Depression of the early 1870’s sent more men on the road in search of work—many of them highly educated professionals—now suddenly down on their luck. This group injected a strong literary/political element into the hobo community (think Robert Service and Jack London)… that inclination would eventually marry them to the labor movement of the 1920’s. 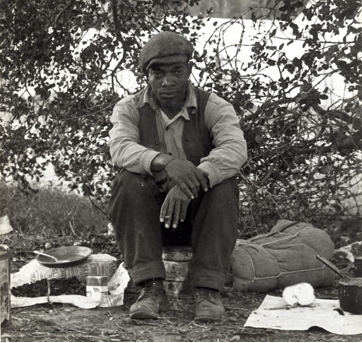 The technological developments of the 20’s reduced the need for large forces of manual laborers and the stock market crash and the Great Depression meant way too many unemployed and way too few jobs. The Golden Age of the Hobo was over. The number of hobos declined—and the numbers of tramps and bums increased. Today, the true hobo is a rare thing.

Throughout the Golden Age, hobos travelled with their worldly goods in bags, suitcases and packs—but mostly they carried their bedrolls (“balloons” & “bindles”) slung on their backs—backroadsmen on the freight train frontier.

Things to do in 2015!
A Bedroll Sling/Tumpline for…

4 Responses to Balloons & Bindles… on the road with…