The Father of Survival Shows ~ Survival in the Bush 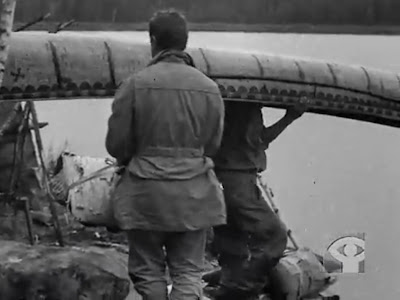 Filmed in 1954, Robert Anderson, an National Film Board of Canada producer, and Angus Baptiste, a Native guide, allow themselves to be marooned in the bush with only an axe and their wits as means of survival. They eat off the land, build their own birchbark canoe and make their way out.  Other great documentaries from the National Film Board of Canada: Nahanni – This short film focuses on the legend of a lost gold mine and a river in the Northwest Territories that lured men to their doom. Albert Faille, an aging prospector, set out time and again to find hidden gold. His route took him through the wild and awesome land particularly suited to the mood of this Canadian odyssey. Song of the Paddle – This short documentary features outdoorsman Bill Mason and his family as they camp and canoe in the wilderness. The film fosters an appreciation for the art of canoeing while celebrating the sheer joy and beauty of nature. Along their trip, the Masons experience countless adventures and some breathtaking scenery, including indigenous rock carvings by Lake Superior. The Ballad of Crowfoot – This short film examines the situation of Aboriginal people in North America through the figure of Crowfoot, the legendary 19th-century Blackfoot leader of the Plains. A rapid montage of archival photos, etchings and contemporary newspaper clippings is married to the words and music of an impassioned ballad written by Micmac singer and songwriter Willie Dunn.