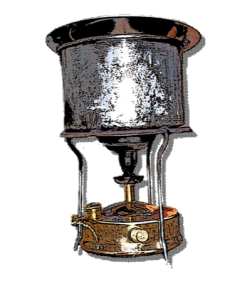 n the early days of the twentieth century, portable camp stoves–fueled by kerosene (liquid paraffin), gasoline or alcohol—began to appear in the inventories of campers, explorers and military campaigners. These ingenious devices were perfect for above-tree-line-mountaineering, long sea voyages and arctic expeditions. They provided a ready means for cooking in these places and conditions where the supply of firewood was scant to non-existent. Eventually camp stoves began to replace the traditional campfire, as recreational campers outfitted themselves with gear better suited to a full scale Himalayan summit assault than to a weekend of camp life in a national forest. Traditional campfire skills, and the old style cookcraft that accompanied them, began to fade. The one pot meal, boiled over the one burner stove, became the model for camping efficiency—as the multi-course meal—boiled, baked, fried and roasted on and by the campfire by an experienced woodsman—was reduced to a quaint, nostalgic novelty demonstration of frontier-style technology. If the fire was not totally absent from the camp, it might appear later as a kind of afterthought to the meal—a pre-bedtime venue for story telling, group singing and that sadistic, nocturnal rite of marshmallow skewering and incineration dear to the hearts of all young campers.

In retrospect, we can better examine the environmental impact that these new stove technologies have had. There is a disturbingly short-sighted idea floating around (fueled by the equipment manufacturers inspired “leave-no-trace” movement) which touts the use of stoves over fires as the more environmentally responsible practice. It must be said, that stove use has indeed prevented the scaring of sensitive environments by insensitive and unskilled campers. But, to assume that their use leaves no trace is to ignore the mining and refining of the metals used as the raw materials, the manufacturing plants and processes necessary for their production, and the international transportation systems needed to deliver them to your front door. The fuels necessary for the stoves’ function also require similar environmental costs. You may walk away from camp with no fire scar, but you’ve contributed to many other scars in many other places with your use of the camp stove. Ah, life is not so simple.

A Place Of Balance

So, does the above rant argue against the use of portable cooking stoves in the camps of traditional-style campers? Not at all…these devices were there, they are part of the historical record, and campers in the 1920’s appreciated new developments and conveniences as much as we do today. The difference between then and now has more to do with knowledge and skill than it has to do with technology. The experienced woodsman of old quickly mastered these new devices and added them to his gear list whenever needed or wanted. But, he still possessed the skills to build, maintain, and use his campfire for cooking, warmth, fellowship and sundry spiritual pursuits. He appreciated the ability to quickly boil up a billy of tea in less than ideal fire-making conditions, but he also possessed the skills necessary to build a fire (using several methods) in almost all conditions. He probably admired the ingenuity of design and fine workmanship that these devices represented, but above all he admired the woodcraft skills possessed by the masters of his sport.

For those venturing beyond the firewood boundary, these stoves opened up new avenues of experience, but the reality is that most camping was done in less demanding environments and in more sylvan settings. For the old-time outer–more interested in “living the open air life” than exploring beyond the known boundaries– the fire remained the center of camp life.

In Praise Of The Camp Stove

“The utility of the stove for Camping is a product of civilization, an article of utility and expedition used against the protest of sentiment, but never against ones’ sense of convenience. The delight of cooking a la gipsy is one thing, but the delight of having coffee, porridge, bacon and eggs, and all ready in twenty minutes, with clean pans, is another…Why I was so slow to take up the ‘Primus’ for Camping purposes, was because of hatred of paraffin. Experiments, begun fifteen years ago, both at home and Sunbury Camp, showed me what a powerful and efficient things it was.”

In Praise Of The Campfire

“What is a camp without a campfire?—no camp at all, but a chilly place in the landscape, where some people happen to have some things. Only the ancient sacred fire of wood has power to touch and thrill the chords of primitive remembrance. When men sit together at the campfire they seem to shed all modern form and poise, and hark back to the primitive—to meet as man and man—to show the naked soul…The campfire, then is the focal center of all primitive brotherhood. We shall not fail to use its magic power.