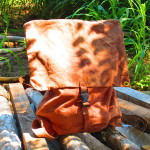 If you haven’t already, go check out Joe Flowers with the owner of Mule Team Canvas Company as they go over the P.A.C.K. One.  Not sure what a P.A.C.K. One is?  The acronym stands for Personally Accessorized Canvas Knapsack.

This is probably the best Canvas pack you’re gonna see at the sub fifty dollar price tag.  It comes to your door as a clean slate waiting to be personalized by you in a myriad of ways.  I’ll show you what I’ve done to mine so far.

Dyed – I wanted to use up some old leather dye that had been lingering around the shop.  It was a foo foo water based dye that I think was called Bordreaux.  I dumped the whole bottle in the bucket but I must have added too much water to the mix.  It turned out very, very PINK.

Dyed Again! –  I was actually going to leave it pink but decided I’d give it one more go.   Trying to use up more of the cheap water-based dyes from the leather shop, I chose a Java Brown this time.  I refrained from mixing in too much water this time and so I was pleased to have a very nice color and tone after I ran it through the wash a couple times to leach any remaining dye out.

Waxed – Back to the shop where I have a crock pot of liquid beeswax.  I just used a wool dauber as that’s what I have around.  Lots of circular motions and two coats later, we’re ready to go back over the wax with a heat gun or in this case, my wife’s’ hair dryer.  A heat gun would probably do better but hey! 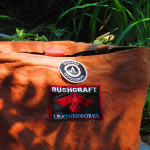 Sewing Patches – If you’d like to get your hands on some custom handmade patches, go bother Dale at Dale’s Patches dales patches at gee mail!  He’s made hundreds of patches for forums, knife makers, my leather stuff, and personal groups alike.   They are better prices than you can even get from China!  Not too often we can say that about American small business! 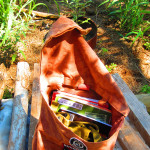 Books closest to my back

I’ve been using this as a day bag mostly.  I did get by just fine when I took it out for an extended trip but I was limited to packing my smallest, and lightest gear.   I’ve logged under 20 miles with it so I can assure you that if it is packed sensibly and is not over 20-25 pounds, you’ll get by just fine. 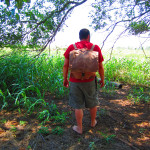 P.A.C.K. One is good for wide shoulders.

Some folks have spoken out on the wide angle shoulder straps but I have grown to love this because of how wide my shoulders are.  Besides, it’s a knapsack which pretty much are all designed in that manner.

Another beef folks seem to have is the plastic buckle.  I do not share their displeasure as I find it to be a damn tough buckle that won’t be failing you anytime soon.  This summer I was playing down by the river and when I left I smashed the buckle in my truck door.  Still kicking and clicking!

If you’d like to get a canvas pack to personalize, but don’t want to pay silly Minnesota prices, the Mule Team Canvas Company P.A.C.K. One is a perfect starting place.

5 Responses to P.A.C.K. One Update