By Christian Noble on December 2, 2013 in Master Woodsman

Don’t consider this article anything more than an FYI…   As it looks like a cross between the traditional Yurt and Bell Tent, the Lotus Belle caught my eye in a New Zealand article on camping.

I do like that it is made from 12 oz. treated canvas, add a stove it can be a ‘hot-tented,’ 13’+ diameter, 9′ height, and unlike a Yurt, it looks likes it’s internal structure is far easier to store and transport.  The design also looks like it would do well in harsh weather with the shape and numerous tie downs.  Nonetheless, this is NOT near the top of my Christmas list.  😉

As a side note, HERE is the article I found the Lotus Belle.  It gives the current perspective of camping in New Zealand as well as a term I am starting to see more of… glamping (glamorous camping).  For the record, no Master Woodsmen were glamped in this article and you are now informed.  Carry on! 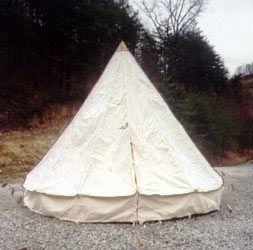 On Your Own in the Wilderness (and Challenge)
Kamp Kephart 2014