By Master Woodsman on May 22, 2013 in Knifecraft, Toolcraft, Woodcraft

Knife sharpening is sometimes thought of as an elusive skill. Actually, once the basic principles are understood, almost anyone can accomplish it.  First of all, it is important to understand that in order to get a long-lasting edge that is shaving sharp, a burr or wire edge must first be raised by sharpening and then stropped off. Many folks never get rid of this burr properly, and just give up on the idea that they can get a knife as sharp as they want it. They may be doing everything right up to a point, but the knife never gets as sharp as it could be. Others may declare, “this knife won’t hold an edge”, when actually they are using the knife before it is completely sharp and breaking off the burr, which dulls the blade considerably. By using the method I am about to describe, I can almost guarantee your sharpening skills will improve.

For whetting, honing and stropping, I use sharpening boards made by cutting handles into a couple of boards 3/8″  X 15” X 3” and gluing 12” X 3″ pieces of wet/dry sandpaper to them. This is a very cheap and effective alternative to stones. In fact, I now prefer to use this method, because it is so simple! I learned about sharpening boards from Mors Kochanski (see his book, Bushcraft). One board has 220 grit on one side and 400 grit on the other side. The other one has 1000 grit on one side and side leather charged with red jeweler’s rouge on the other side. I use Dremel Jeweler’s Rouge, available at any large home improvement store. If I buy a knife in rough shape, I may use a soft Arkansas stone or even a file to begin the sharpening process and get it ready to sharpen on the boards. When sharpening, I first hold my knives at about a 20 degree angle (or flat on the bevel if it’s a single bevel Scandinavian type) on the 220 side of the board and with the edge facing me, I push the blade away from me. Then I turn the blade with the edge away from me and pull toward me, all the while maintaining the 20 degree angle to the board. I start with 10-15 strokes on each side of the edge.

Once the knife is properly whetted on the 220 side of the board, there will be a burr along the entire length of the edge on one side (the side of the edge facing up when you finished whetting). With the edge of the thumbnail, one should be able to catch and feel this burr. You should periodically check for its presence while sharpening. Once the burr is established along the entire edge, it is time to hone the knife. Otherwise, with further whetting, the burr is just being bent back and forth. The blade may or may not be sharp enough to easily cut paper at this point, depending on the size or orientation of the burr. After whetting, if you think the knife should slice paper but it won’t, try a few light strokes on the opposite side of the edge.

Once a burr is raised, blade steel is being wasted with further whetting on the 220 side of the board. Next, maintaining the same 20 degree angle, I hone the blade on the 400 and 1000 sides of the board to further reduce the burr, about 10-15 strokes on each side of the edge, first on the 400, then another 10-15 on each side of the edge on the 1000. Once it is honed in this manner, the knife should easily slice paper. Nevertheless, a burr may still exist, but may be so small it cannot be felt. To totally remove the burr, I use the side leather with jeweler’s rouge. Again, with the edge facing toward me, I first push the knife away from me and then with edge facing away from me, I pull it toward me at the same 20 degree angle. I work each side of the edge 10-15 strokes on the strop, alternating sides until the burr is completely gone.  Stropping takes time, at least twice as many strokes as used in whetting and honing combined. Toward the end of the stropping process, I kick the blade up a tiny bit beyond 20 degrees at the end of each stroke. I do this on maybe the last five strokes on each side of the edge. This gives 100 % of the edge a mirror polish. The knife should now be literally as sharp as a razor. For a final finish, here’s a trick I learned from master sharpener Murray Carter. Take a single thickness of newspaper and wrap it tightly around one of the sanding boards, then strop the knife on this. Next, pull the edge of the knife edge across a piece of soft wood two or three times, so that it cuts into it, then re-strop. Repeat this process two to three times.

Stropping will save the blade of a knife because once the edge is sharpened and polished, most of the time all that is necessary after use is a stropping on the side leather to bring back the razor edge. This holds true even after extended periods of use if the knife steel is good and eliminates unnecessary removal of steel on coarser grits. Stropping also strengthens the edge, giving it a micro-convex shape, and helps prevent nicks due to the wire edge breaking off, an event that would require minor reshaping and /or re-whetting. I have many knives that I have used for years that have only been on a stone one or two times, but that have been honed or stropped many times. I strop all my axes and knives with similar results. Touch-up stropping can be done on a folded up piece of newspaper. The ink is just abrasive enough to do the trick, though it is not as abrasive as jeweler’s rouge. In the field, the edge of a car window can also be used like a steel to remove the burr. Stropping is an all-important aspect of sharpening that is too often ignored. True edge-holding ability cannot be judged until a knife is stropped. If the edge cannot be brought back with the strop, try the hone before re-whetting.

Books have been written about tool sharpening, and I am assuming that the reader has some basic sharpening experience. There are many other good methods of sharpening. Some people swear by Japanese waterstones, but I have never used them. They are pretty expensive, plus the process looks messy. Japanese stones also require some work to keep in shape.  Sharpening has much more to do with proper technique than with the sharpening media used. You may use whatever sharpening method you like; it is however, important to adopt a method of sharpening that is practical and adaptable to field conditions. Relying on a buffing wheel for sharpening doesn’t help when one is sixty miles from the nearest electrical outlet.

I keep all of my knives well-oiled with a thin coat of lubricant. I like to use Ballistol. Its biodegradable, smells good (to me at least) and has been used for almost 100 years by the German military. When I am storing knives for long periods, I get excellent results using Break-Free Collector. Whatever you do, do not coat anything metal that you care about with petroleum jelly. It is hygroscopic (traps moisture) and causes rust to develop. Thick coats of any oil inside pocket knives that are carried attract dirt and gunk them up, so go thin if you are putting them in your pocket.

You don’t have to live with rust, or even patina, on a carbon steel knife if you don’t want to. Wipe the blades dry after use and oil them regularly and they’ll stay in good shape. I have a large cotton gun patch saturated with Ballistol that I keep in a 1.5” X 2” tin box. Each evening, I wipe the blades of the knives I used that day. I carry this little box with me if I am carrying knives and axes on an extended camping trip. Every once in a while, I use toothpicks, cotton and a thin oil to clean and lightly lubricate the inside of my pocket knives. I start this as soon as I buy a knife and stay with it. If you keep your knife dry and wipe the blades after use, you don’t have to worry too much about rust; just wipe them with oil when you can. It doesn’t necessarily have to be done every day.

A thin film of rust may develop if you use the knife over several days without oiling, but that can be polished off later if desirable. If you don’t like the patina that develops from using your knife to cut food products, it can be polished away with a metal polish like Flitz or jeweler’s rouge. Patina can be a good thing, as it can actually protect the blades against deep pitting if reasonable care is taken. Some people like the patina and don’t worry so much about it. If the knife is going to be immersed in liquids on a regular basis, it might be best to go with a stainless model.

Tom Ray, 53, grew up on a farm near Lockhart, South Carolina. His youth was spent hunting, fishing and trapping in and around the Broad River Basin and Sumter National Forest. As a result, he developed a lifelong interest in history, aboriginal studies, survival, primitive arts and frontier life. Early teachers were his older brother James and his Uncle, Grover Pinckney “Pink” Scott. For the last sixteen years, he has studied with Steve Watts at the Schiele Museum of Natural History. Another very important teacher is Errett Callahan. Other teachers and influences include David Wescott, Mel Deweese, Mors Kochanski and Dave Holladay. For the past 28 years, Tom has worked in private and public education.  He has taught numerous primitive skills classes and has presented a multitude of interpretive programs to a wide audience. His work has been published in the Bulletin of Primitive Technology. He and his wife Claudia reside in Rock Hill, SC. 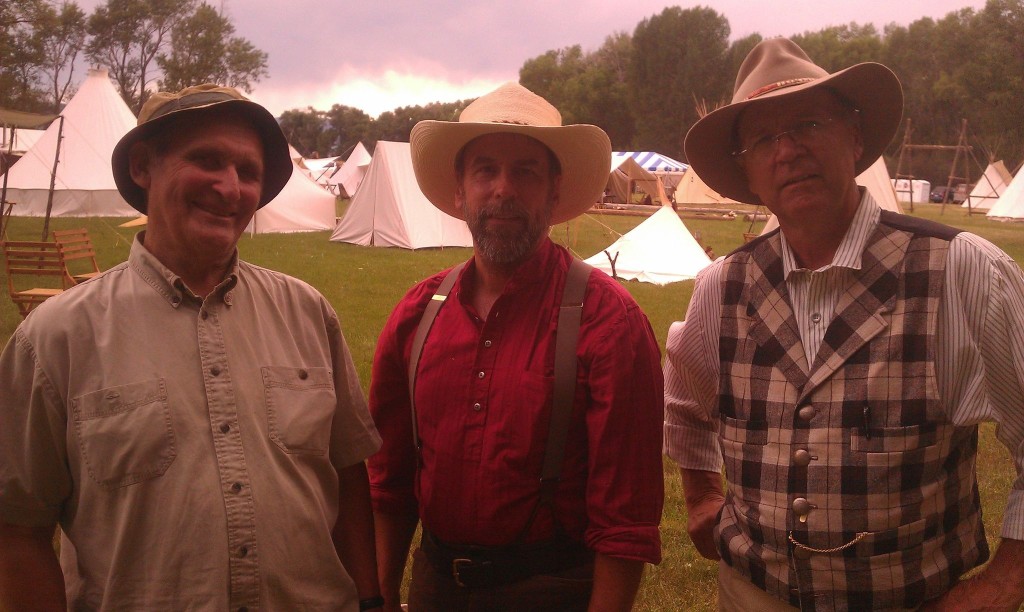 Editor’s Note:  I use a similar sharpening system as mentioned in Tom’s great article.  A thin board from a used orange crate in this case, with glued-on sandpaper for home use.  For the field, I have adhered a piece of leather and cut out different grits which are held to the board with a band (old bicycle tire) so they can easily be replaced.  I keep on hand 600, 800, 1000, and 1500 grit.  The higher grit sandpaper can be found in the automotive paint sections of autopart stores should you not find them anywhere else. 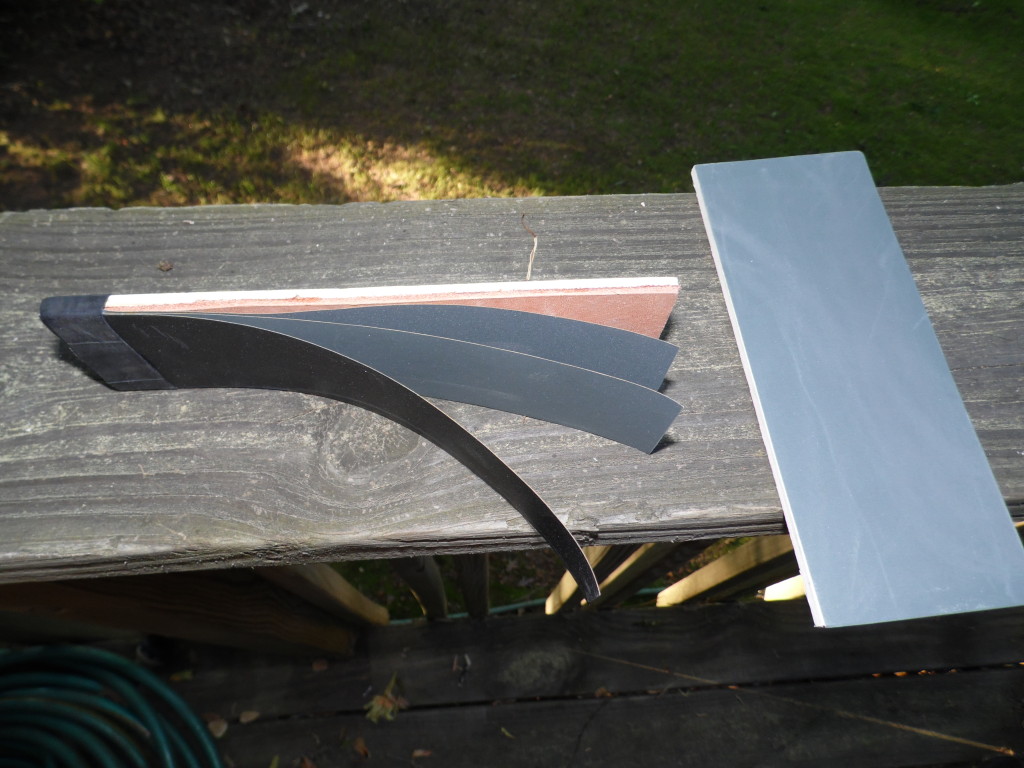 Classic Camping Knives by Steven M. Watts
Add The Hammock Insulation Bed To Your Survival Kit And Sleep Like A Baby

5 Responses to Knife Sharpening and Care by Tom Ray