“A knifeless man is a lifeless man” – Nordic proverb

Most campers and woodsmen in the first quarter of the the twentieth century carried both pocket knives and sheath knives — a wise continuation of frontier practices from a century or more before. Sheath knives performed the “heavier” woodworking, skinning/butchering, and kitchen duties, while pocket knives performed “lighter” tasks of whittling, carving and twig crafting. Even though an experienced camper with superior skills could make do and perform almost any task with any knife — “a common jackknife will skin anything from a squirrel to a bear” (Kephart) – most preferred the combination of the two types.

Pocket Knives
A wide variety of slip-joint pocket knives were available. A young camper’s first pocket knife was a token of passage into a world of craftsmanship and responsibility. With the knife, came instruction in use, care, handling and stewardship. These tools might be carried for life, or passed on to a new generation of woodsmen. A look at an Abercrombie and Fitch catalog from 1910 reveals thirty-four different pocket knife models! The vast majority of these were of high carbon steel, but stainless blades began to make their appearance in the 1920’s. Popular models included: Trapper, Stockman, Congress, Barlow, and Scout/Camper styles. 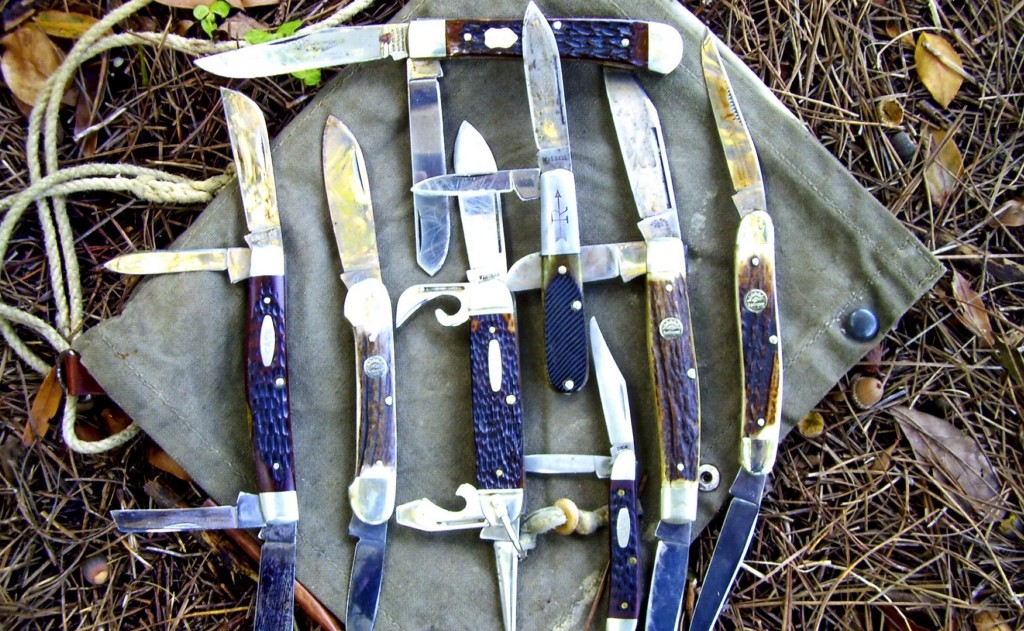 Sheath Knives
When it came to fixed blade/sheath knives, the choices were not so great. There were thick bladed Bowies left over from the last century, and few imported English hunting knives, but most woodsmen (like their frontier forbears) made do with thin-bladed butcher knives. Some (like Nessmuk and Kephart) sought out blacksmiths for the production of a custom knife. But, there were commercial alternatives.

Marble Arms created the Ideal hunting knife in 1898. It was the first of a line of American sheath knives that would become classics. “The Ideal was entirely new and different… the blade shape, brass guard, handle of stacked leather rings, terminating in a pommel of stag or aluminum, was widely copied and influenced the look of American outdoor knives for decades after.” (Brent Payne) 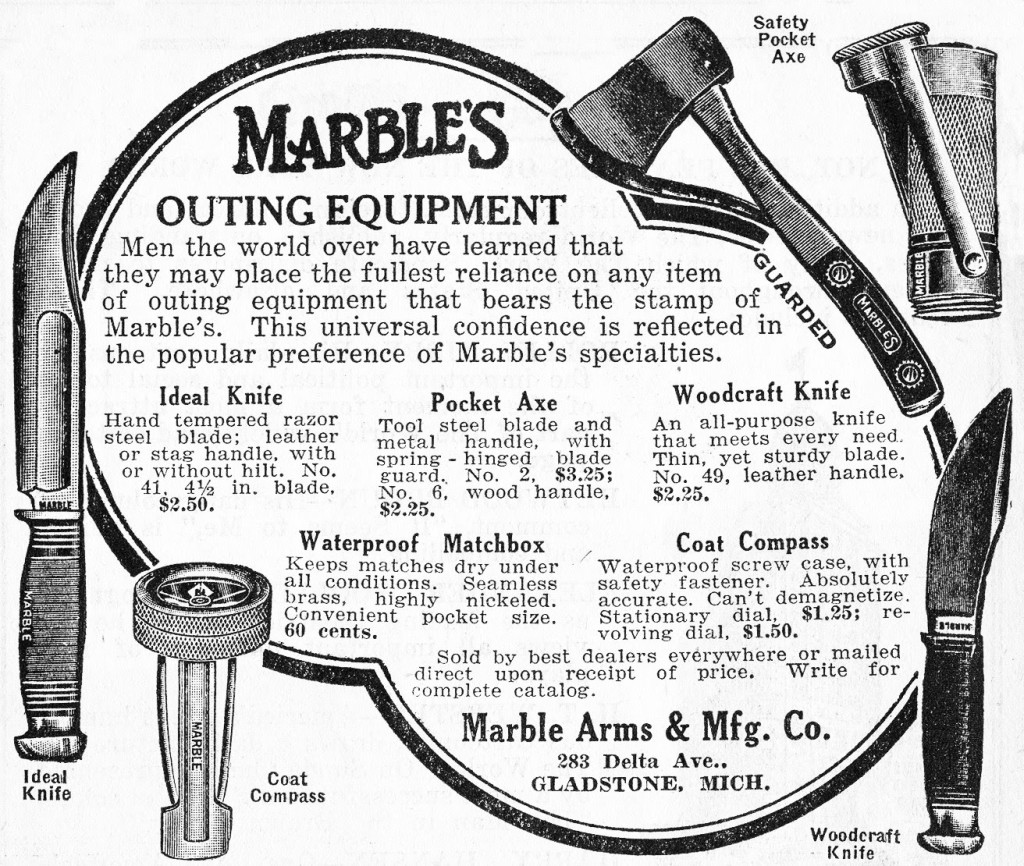 Yet, the Ideal was not “ideal.” With its 3/16″ spine it was still a bit thick and heavy for the most discriminating of woodsmen. Stewart Edward White complained that: “The common mistake among amateur hunters is that of buying too heavy a knife with too thick a blade. Unless you expect to indulge in hand to hand conflicts, or cut brush, such a weapon is excessive.” He proclaimed “a butcher knife of good make is one of the best and cheapest of sheath knives.” His opinion was shared by most other wood-wise campers.

Marbles responded with two new models: the Expert in 1906 and the Woodcraft in 1915. They were both thin-bladed-convex-edged models, and they quickly became the choice of the classic camping masters: White, Miller, Kreps, Mason and even Kephart himself. The Woodcraft went on to become Marble’s best seller of all times.  Other companies copied them.  My Boy Scout sheath knife (now long-lost) was a Marble’s-inspired model of a forgotten brand, and my father’s sheath knife (now in my possession) was a Marble’s-influenced model made by Western.

Nordic Knives
Meanwhile, across the Atlantic, European campers in the Golden Age were sporting English, German, American and Nordic sheath knives. The early twentieth century knives of Sweden, Denmark, Norway and Finland were part of a knife making tradition that stretched back more than a thousand years. By the 9th century, the Vikings had developed a knife design that has survived basically unchanged to the present — the Nordic knife.

Nordic knives in their camping/sporting form feature relatively short, thin blades with a distinctive single-bevel edge (popularly known today as a “Scandinavian grind”). Perhaps the most famous Scandinavian outdoorsman of all time, Fridtjof Nansen, carried such a knife. The indigenous Sami of Sweden and Finland carried such a knife. Boy Scouts and Girl Guides from the Nordic countries carried such a knife. The 1924 Boy Scout World Jamboree was staged in Denmark. Following that event, and untold number of scouts from around the globe returned home with an exciting new knife — traded right off the belts and buttons of their Danish Scout hosts.

Nordic knives probably first entered America with the late 17th century Swede-Finn pioneers who settled on the wild western frontier territory of Pennsylvania. They brought with them their forest skills, their log cabins and their single-beveled knives. Even though not as well known in American history as their Scots-Irish neighbors, they were the first real American frontiersman — venturing away from the coastal settlements, living with and learning from the Indians and passing on their old world/new world skills to the next generation of young men (Daniel Boone among them) destined to hunt and explore further frontiers to the west and north.

During the late 19th century Nordic knives found their way into American hands with the spread of the Swedish “Sloyd” (“handicraft”) movement — an education philosophy based on crafting skills — from woodworking, to blacksmithing to weaving. By 1908, two important Sloyd schools were in operation in New York and Boston. Within a few years Sloyd classes were being offered in schools across the country. It did not last. The Scandinavian hand craft style of manual education was soon replaced with the American-style, machine-based “industrial arts” approach to 20th century craftsmanship. An artifact of the era was the term “Sloyd knife” – usually referring to a Swedish carving knife but sometimes applied to Nordic knives in general. 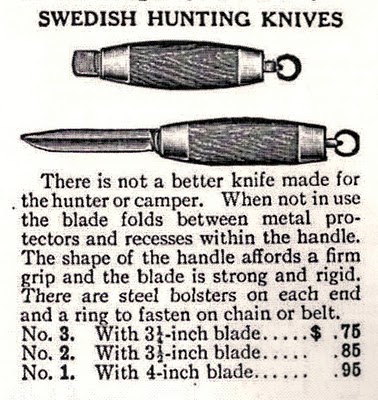 Before the turn of the 20th century, Nordic knives were beginning to appear in the outdoor equipment catalogs of the day. One of the most popular was the Swedish “barrel knife” with a blade that folded into a metal case and then stored away in the handle. They were extremely popular in the U.S. At one time the well-known U.S. importer Edward Zinn ordered 3,000 dozen barrel knives from the Engstrom Company in Sweden! They show up in American catalogs as early as 1875 and were featured by Abercrombie and Fitch and New York Sporting Goods. 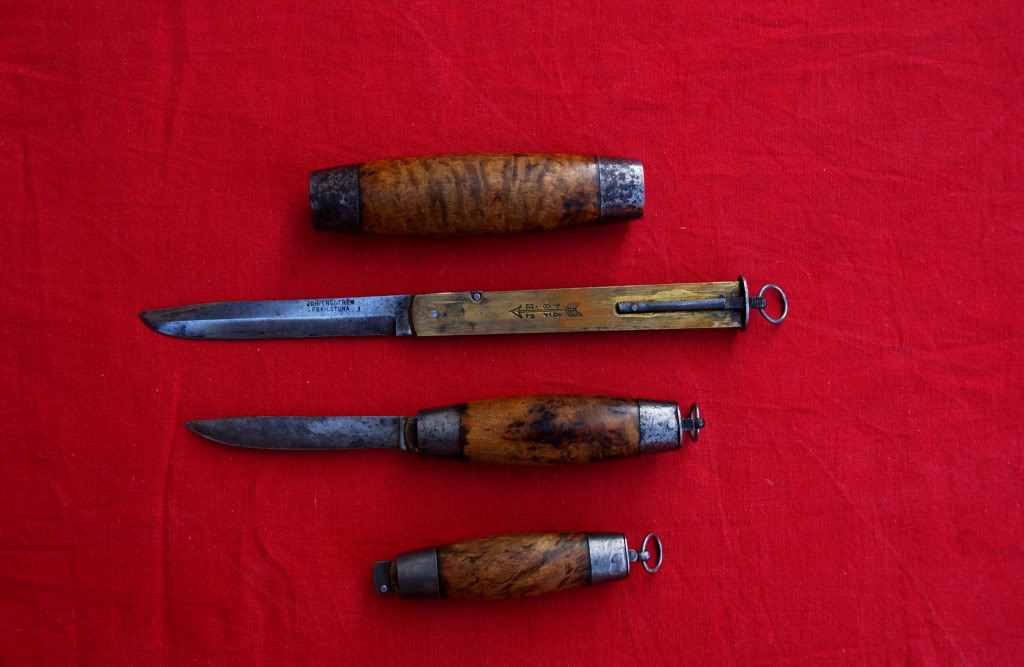 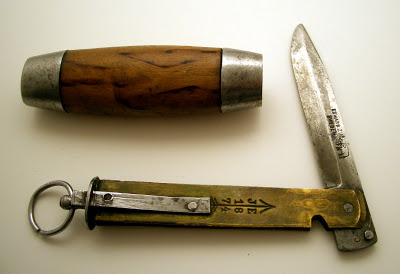 In the end however, it must be said that the Nordic knives that dominated the backwoods tool kits of Northern European classic campers, were not present in great numbers on the American side.

Several forces are at play here. Distribution/exposure levels were perhaps the greatest determinate. Unlike today, where Nordic knives are readily available from sources (thanks mostly I believe to the gospel spread of Mors Kochanski with the publication of Northern Bushcraft), few outlets for these knives were available in the Classic Era. Even in the pre-internet days (for me) of the 1980’s, it wasn’t all that easy. I bought my first Mora knife from a mail order woodworking catalog. It was labeled, “Sloyd knife.”

The popularity of the Marble’s knives and their imitators, certainly was another factor. They dominated the market and became one of the true totems of outdoor life — proudly hanging from the belts of countless plaid-shirted campers, hunters and fishermen. They exemplified the standard — eclipsing for many, any consideration of an alternative edge. Had the old time classic campers had more exposure to the Nordic knives, they would have discovered that alternative — the almost perfect geometry of a time-tested blade so well suited to a wide variety of camp chores. So, we know that these knives were there — but perhaps only out on the fringe. The do not appear in the writings of the great masters from the Golden Age of Camping.

They are present, however, in the work of one particular second-tier fringe writer of the times. It is known that Gypsy Jack (1860 – 1940) had a great fondness for Nordic knives. But… you must understand… he got around more than most.