The Human Race video below popped up on an internet forum earlier this week.  Many years ago I had seen this documentary about three gentlemen with different backgrounds making a 300+ mile race by foot across the Australian Outback with what they can carry.  Specifically, a German Survivalist in his early 60’s, an American marathon runner in his mid 30’s, and a true local in 70’s.

I actually watched the whole thing again and found it interesting how much my perspective has changed over the years.  Very similar to re-reading books on survival years later — something I highly recommend as they are usually much better the second time.  I will admit to reading some text five or six times, always getting more and more.  Will have to save that discussion for another article.  Enjoy the documentary… 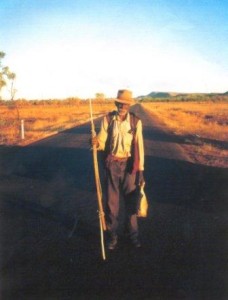 …my Grandfather was the first one to make it to the marsh flats in my home town Wyndham, but the producers made it so the young American was the first over the line and that they crossed together – but in actual fact, he was already there a day before the other two made it to the flats.

Camping and Woodcraft republished!
Back To Eden Gardening Method

2 Responses to The Human Race