How to Clean a Snapping Turtle

I was down on the creek fishing a few weeks ago and what did my wondering eyes see? Yep, a snapping turtle trying to hurry and get to deeper water because he knew he had been spotted. I didn’t bother jumping down the bank and grabbing him this time but I usually do that once or twice a year. Snapping turtles are prevalent here in Kansas. You’ll see them walking through pastures or crossing the road. You may catch one on the end of your fishing line or just see one up in the shallows like I did. So the hard part isn’t catching one but rather cutting into it. At least it was for me. The shell is a nightmare to get off if you don’t know where to cut and when. I’ll walk you through the process so if you’ve never tried snapping turtle, you can now!

Step 1: Get a snapper. They can be easily handled by the tail, just stay away from their head. 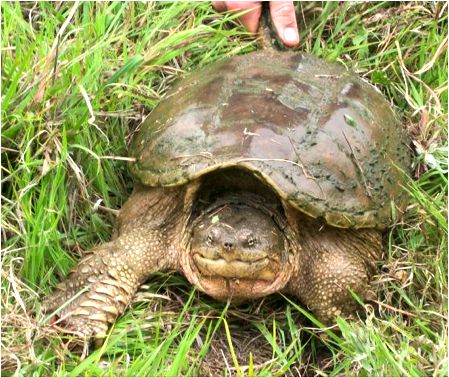 Step 2: Stand on the back of its shell and give it a good smack in the nose, driving its head back towards its shell. This will render the turtle stunned for a bit. While the turtle is still out of its wits grab its head with a pliers or your hand and pull up. Make a quick clean cut from its throat, navigating through its spine, and finally cut the head off. This method, if done right, will make a very quick and clean dispatch for the turtle. 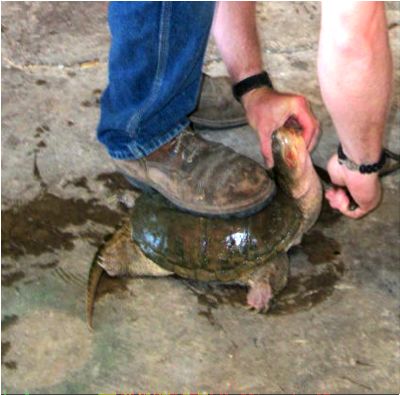 Step 3: I use a 2×12 with a 16 penny nail drove through the bottom sticking up to hold my turtle in place. Simply drop the turtle upside down on the nail and it’ll stay in place while you cut it up. This way also allows you to spin the turtle as you work. Begin by cutting off each foot. The joints are about an inch behind the claws. Use your knife to gently find your way between joints. This will prevent the turtle from clawing and scratching you during the butchering process. 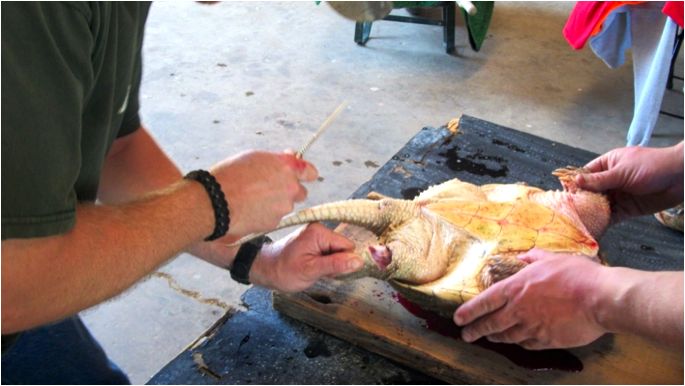 Step 4: Now to get the shell off. Cut right down the center of the bottom plate to its vent; use a wooden baton if needed. Then cut around the perimeter of the shell. 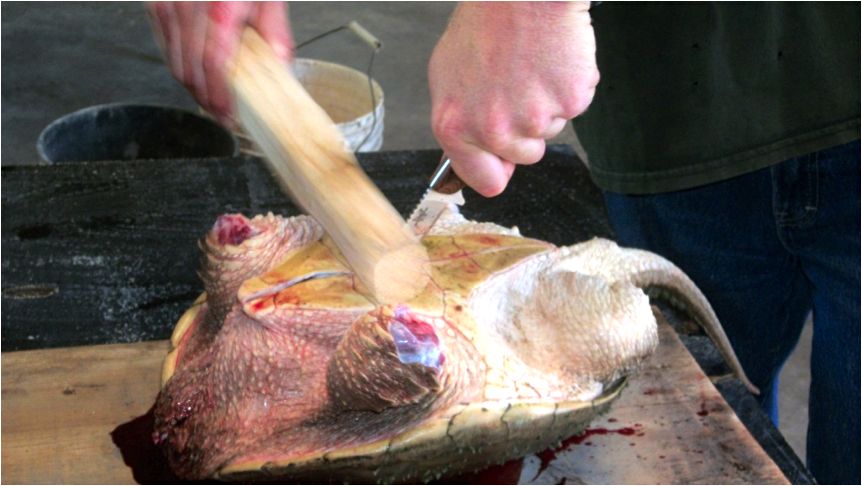 Step 5: Skin the turtle from the middle out. Be careful when starting because the front shoulder blade is right next to the bottom shell. Once again, let your knife “feel” its way through. 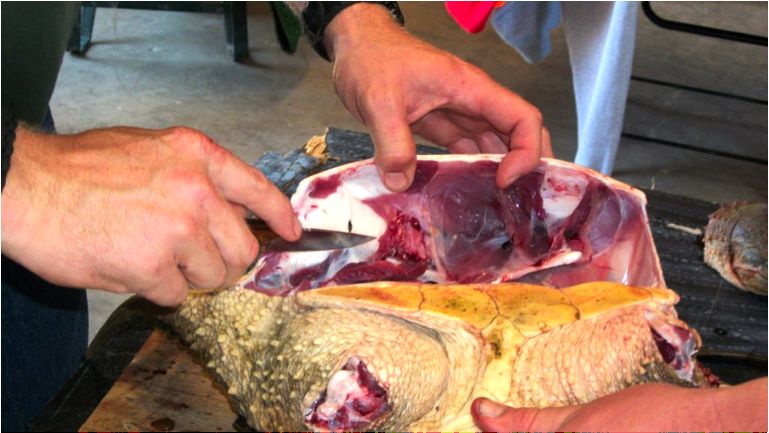 Step 6: Work your way around the legs. Right now you are skinning the turtle just as you would with any other animal. Do both sides the same. 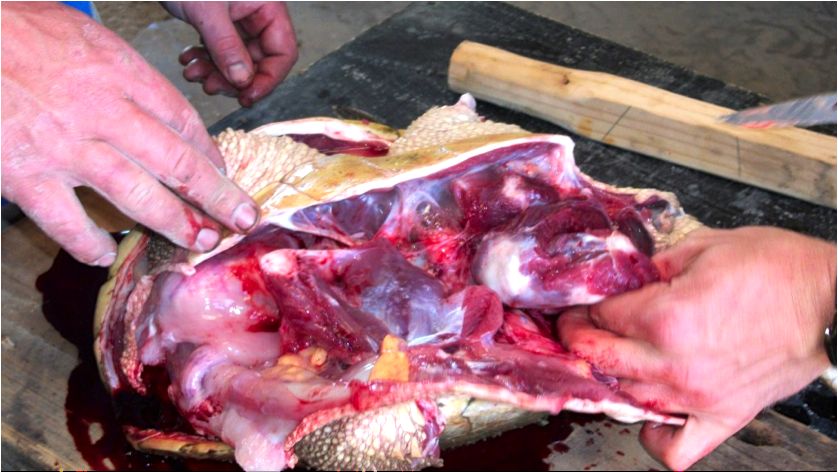 Step 7: Once the skin and bottom portion of the shell are removed. You’ll now quarter out the limbs. Turtles have a different bone structure then other animals so it’ll take some trial and error to get the quarters off. 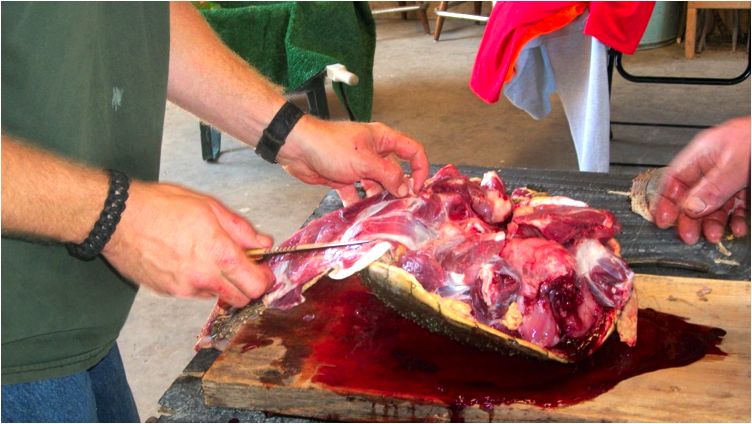 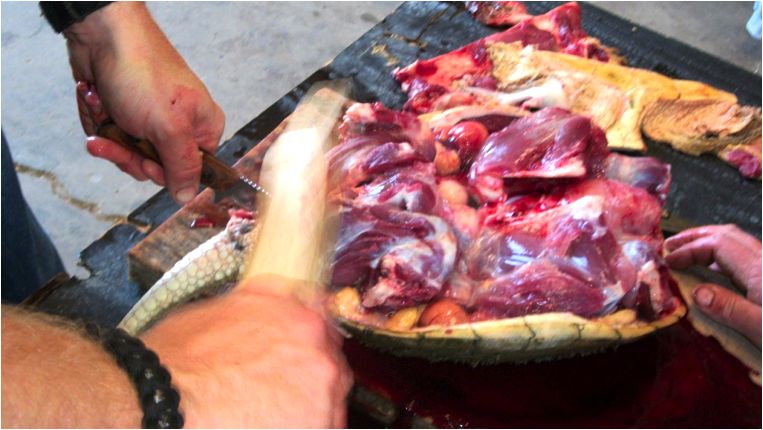 This one happened to be a female, not a bad thing for here. Notice all the eggs, which can also be eaten. 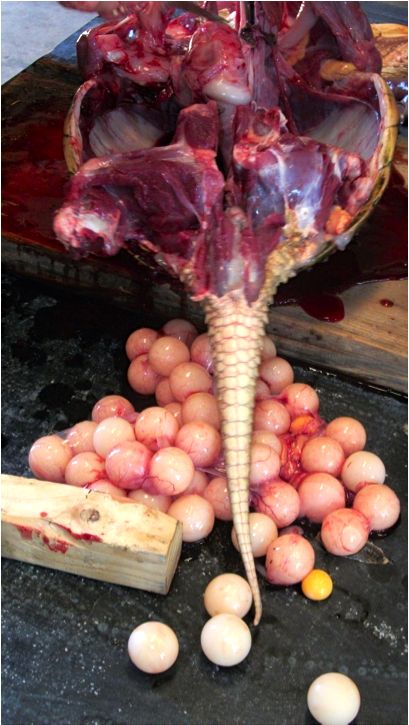 Step 8: Work out the rest of the quarters. 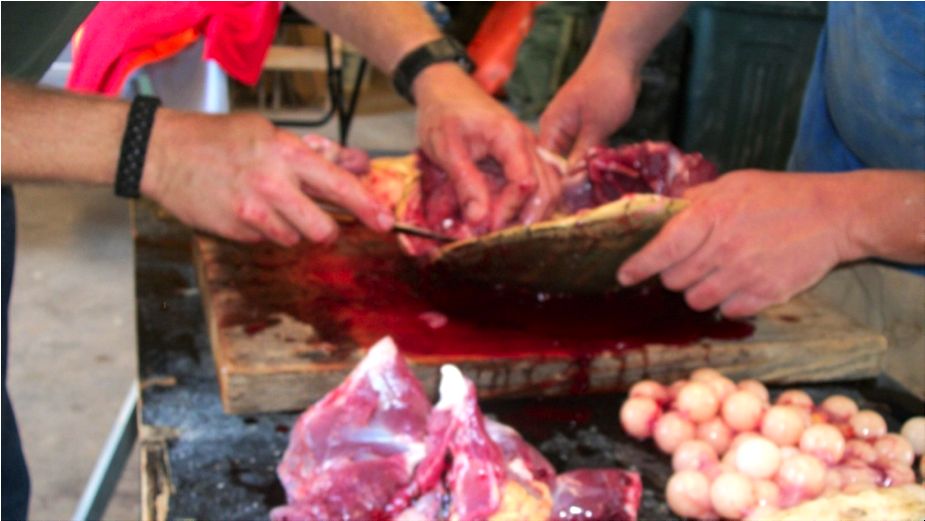 Once the 4 quarters are out, cut off the neck and tail. As you can see, there’s a lot of meat on one turtle! 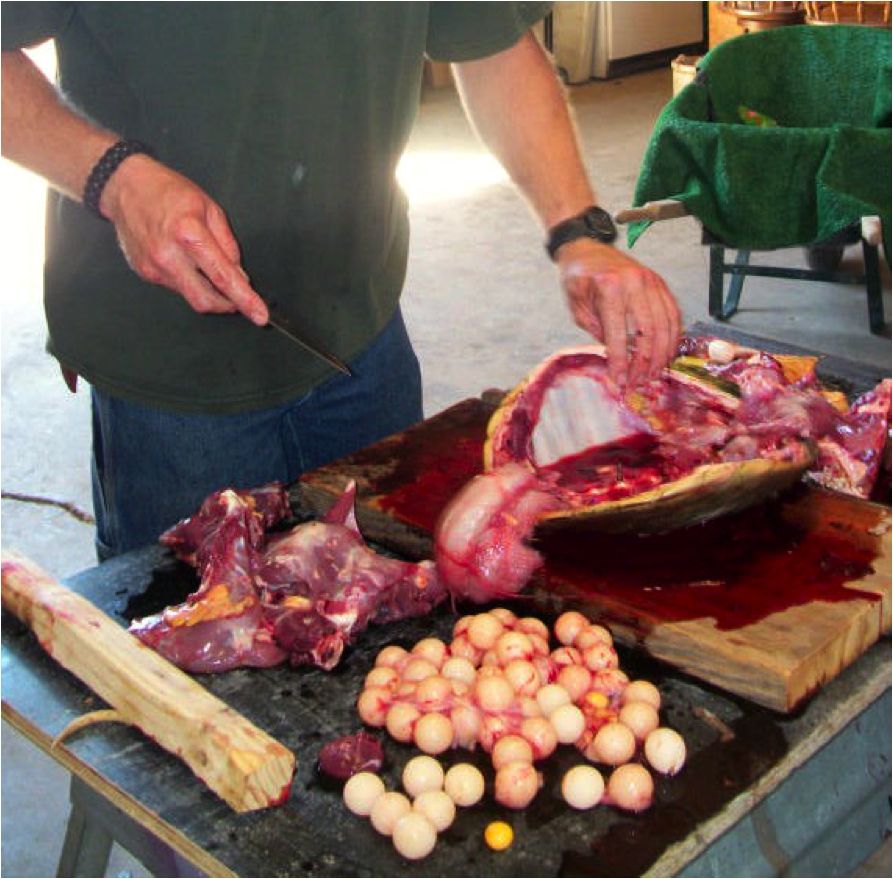 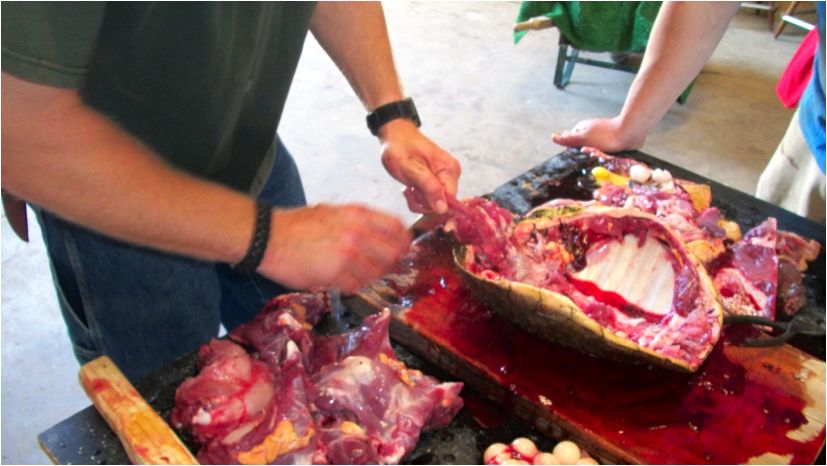 Step 9: Using your baton again, gently cut down each side of the backstrap. Remove each side and trim off the cartilage. 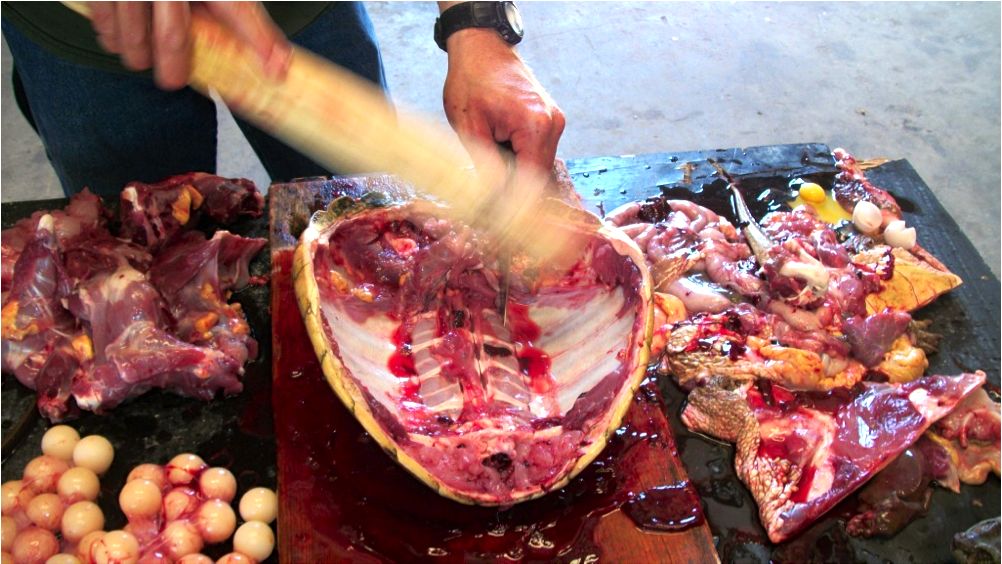 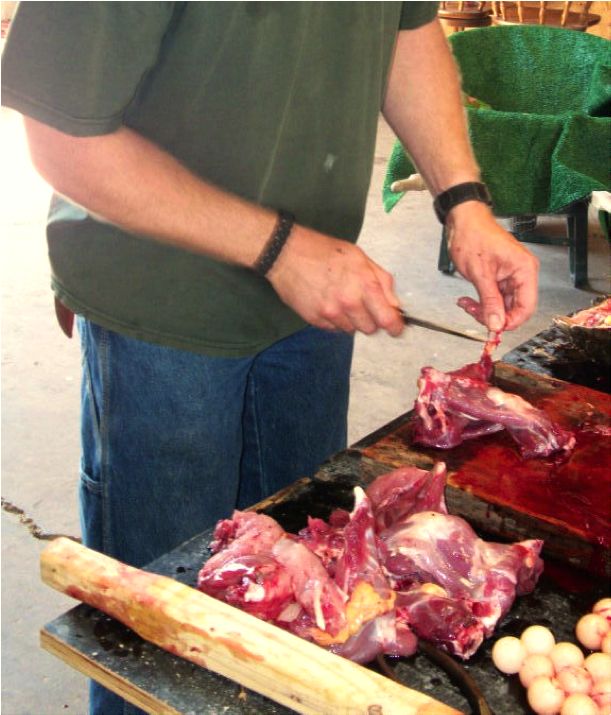 Step 10: From this point, trim the meat; cutting off any damaged parts, yellow linings, or other unwanted parts. 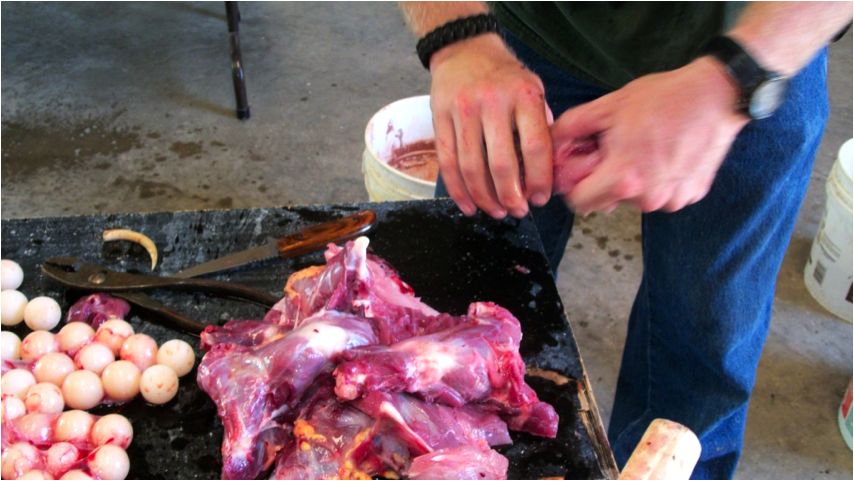 Step 11: Rinse the meat and soak in salt water overnight in the refrigerator. What’s left over from butchering can be used for fishing bait or trapping bait (where legal).The shell works as a good attractor for trapping. 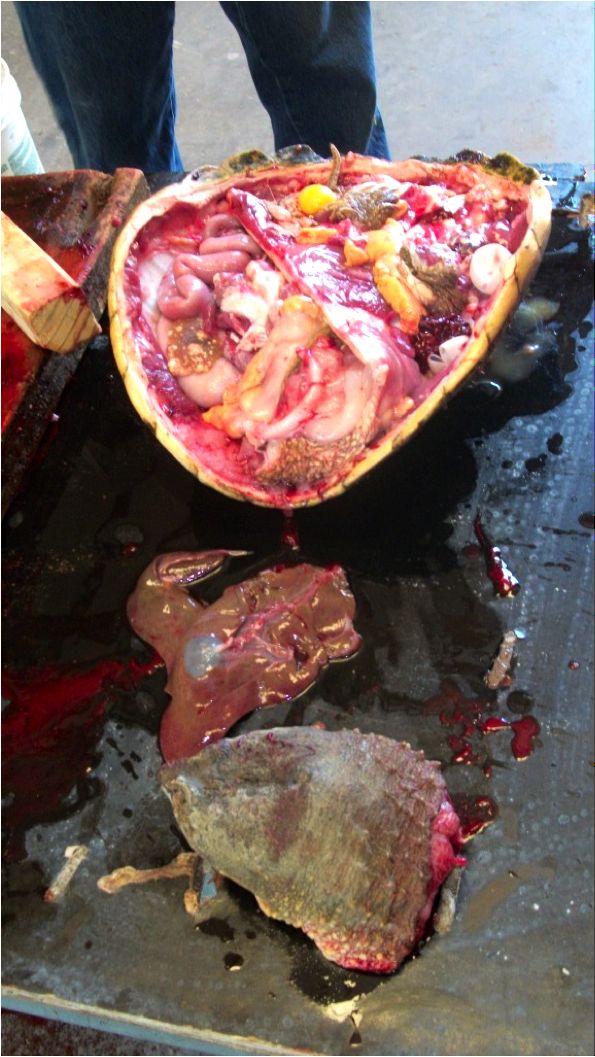 Step 12: Lastly, when I make turtle I boil the meat for about 90 mins. This will tenderize it and cook it. For flavoring I’ll then throw it into the cast iron skillet with a little oil and seasoning. Brown each side and you’ll be good to go. Turtle is very good and cutting one up is a skill worth knowing.

Where Have All the Axes Gone?
Do Preppers Really Need to Know Wilderness Survival Skills?

19 Responses to How to Clean a Snapping Turtle